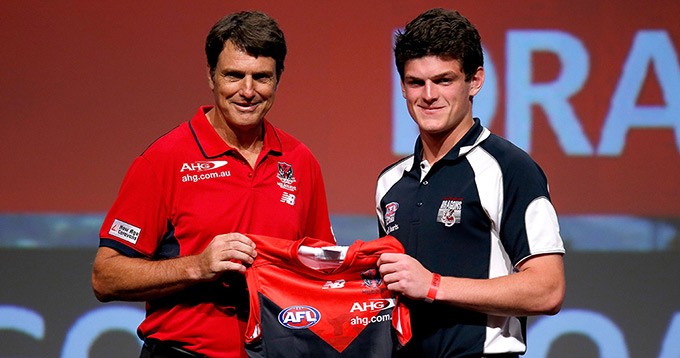 Hampton Rovers again had good representation at this year’s AFL Draft with two players finding AFL homes. Angus Brayshaw was picked at #3 by Melbourne and Brayden Maynard #30 by Collingwood.

Brayshaw has long been touted as a first-round pick and that was confirmed on Thursday evening when he was the third name read out. He was in attendance at the Gold Coast Convention Centre with his family and was presented with his jumper by Melbourne coach Paul Roos.

The Rovers now have four players at the Demons with Angus Brayshaw joining Chris Dawes, Christian Salem and Jayden Hunt at the club.

Brayden Maynard was selected at pick 30 and will play for Collingwood in 2015. He had particularily strong end to 2014, taking out the best & fairest at Sandringham Dragons and a strong showing in the national U18 championships.

RELATED:
– Brayshaw excited to be ‘back’ at Dees
– Welcome to Collingwood: Brayden Maynard

Congrats to Angus Brayshaw, pick #3 and off to Melbourne. Also to Brayden Maynard #30 off to Collingwood. #gorovers