The Hampton Rovers AFC Hall of Fame recognises players and/or coaches who have excelled both on and off the field. The Hall of Fame was established in 2004 where at the club’s 75th Anniversary Gala Dinner, held at the Brighton International on July 17, thirteen men were inducted, with all eight living inductees in attendance. In 2016, there were 14 club legends inducted to make up for the fact there have been no additions since the first in 2004 – these occurred at three special home game luncheons throughout the year.

IAN CAVE
Started at the Rovers in 1965. Played 284 games with the club over two decades. Reserves coach for 8 years, in that time his chargers played in 14 Finals matches for one flag (1979) and two runners up. Several stints on the Senior Committee – firstly between 1966 and 1972, then 1996 and 1999, and from 2004 on. Has been the Senior Vice President (one year), Club Secretary (3 years) and VAFA Delegate (5 Years). Was awarded Best Clubman in 1969. VAFA State Selector for 5 years and was on the VAFA Permit Committee for two years.

NORM JAMES
The founder of the club and after which our home ground ‘Boss James Reserve’ was named after in 2002. Senior coach for 16 years from 1929 until 1951 (excluding 1933 and when the club was in recess during WWII).

ROSS SMITH
The most decorated player ever to wear the green and gold. Started with Hampton Scouts – the under 19s as they were then called – in 1958 and played 51 games between then and 1960. In 1961, started at St Kilda in the then VFL aged 19. Played 234 games for the Saints as a Rover. According the AFL Encyclopaedia of Football which has the records of every AFL/VFL footballer, his career really kicked of in St Kilda’s Prelim Final win in 1966 – the biggest and clearly most successful year the club has had on the field. In 1967 he earned his Big V Guernsey and in that year won the games most coveted award – the Brownlow Medal with 24 votes. Won 2 Club Championships at St Kilda. Played in St Kilda’s grand final team in 1971 when they were beaten by Hawthorn. Captained St Kilda from between 1970 and 1972. Captained Victoria in 1972. Headed West to coach Subiaco in the WAFL for three years, and in one of those won a flag. Coached the Saints in 1977. Ross Smith was inducted into the Hampton Rovers Hall of Fame under the clause relating to Meritorious Achievement at the highest level.

PETER WOLFE
Joined the Rovers in 1964. U19 most consistent award in 1965 & third in VAFA Best & Fairest despite only playing 12 games before being promoted to the Seniors. 1969 Club Best & Fairest. Senior captain in 1970 & 71. Awarded Rovers Life Membership in 1974, also in that year won most the seniors determined player. Retired in 1977 after 212 games to accept a work transfer interstate. Returned to Victoria four years later and became Treasurer for three years, then became President for two years, and did another year as Treasurer in 1988. During his 40 years at the club he has held many other positions, such as General Committee Member, Social Committee Member, VAFA Delegate, Senior Runner, Boundary Umpire, Trainer and Chairman of Selectors. Was awarded the VAFA Certificate Of Merit in 1999. Took on Treasurer again in 2004 for his ninth year in that position. 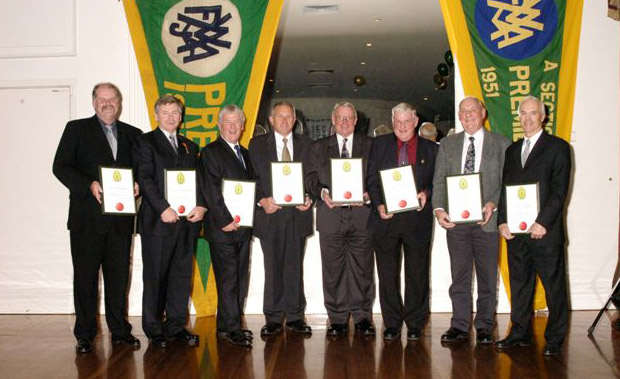 DENVER ARTZ
Axe is regarded as one of the all-time great players of the Hampton Rovers Football Club. He played 130 VAFA games and 85 Junior games for the club. He won the Senior B&F in 1999 and 2003, represented the VAFA (A/B side) on multiple occasions including once as vice-captain, and played in three Senior premierships, 1995, 1998 & 2001.

WILEY AUSTIN
Wiley played 159 very tough games of VAFA football and was Senior captain for five years from 1982 to 1985 and in 1987. He was a member of the club executive for three years and was Bar Manager/Clubroom caretaker for many years and the heart and soul of the football club in some very lean years.

BARRY BIRD
Birdy played 352 VAFA games for the Rovers. He won three Reserves Best & Fairests in 1983, 1987 & 1988 and was a member of the Club Executive for three years and a committee member for many more.

DAVID COMBE
David played 192 VAFA games for the club, won the VAFA D section goal kicking in 1975. David won the Reserves best & fairest in 1972 and was Senior President in the premiership year of 1995, until 1997.

GRAHAM COOPER
Graham played his junior football with the Hampton Rovers U19’s (formerly known as the Hampton Scouts). He was recruited by Hawthorn and played 90 VFL games between 1959 and 1965 and was a member of the Hawks first ever premiership team in 1961, a feat his younger brother Ian experienced five years later when he played in St Kilda’s first ever premiership team. Graham is inducted to the Hampton Rovers Hall of Fame under the Meritorious Achievement category.

GARY NASH
Nashy played 193 VAFA games for the Rovers and won the senior best & fairest in 1977 and the under 19s best & fairest in 1972. He was senior captain for three years – from 1978 until 1972. Nashy was both senior and reserves coach in 1986. He is a member of the senior executive and a member of the club’s board. Has won the best clubman award and continues to be a tireless worker around the club.

ANTHONY NAUMOFF
Freddy played a total of 168 VAFA games for the Hampton Rovers. He was a senior running for many years, coached the reserves for 7 years, under 19s for 3 years as well as the under 17s and under 16s. Tony was awarded the VAFA Certificate of Merit in 2006 and has been club secretary since 2013. 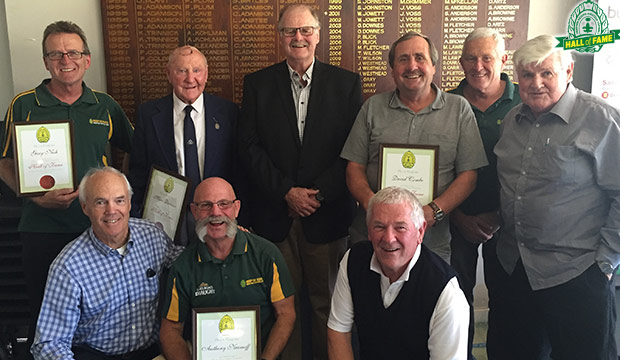