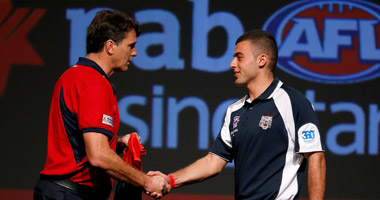 Salem was predicted to be in the top 10 and picked up by either Melbourne or Collingwood. The midfielder was selected at pick 9 and will join another former Rovers player Chris Dawes at the Demons in 2014.

After playing all his junior footy at the Rovers (70 games since 2004) and attending Brighton Grammar, he was a solid contributor in the TAC Cup at the Sandringham Dragons and performed well at the national championships.

Salem was one of the most sought after draft prospects this year and realised a life-long dream when his name was read out. He was presented with his jumper by new coach Paul Roos on the stage and in front of a live national television audience.

Read more about his selection and watch an interview on melbournefc.com.au here >

Karl Amon was selected at pick 68 by Port Adelaide. In between his Sandringham Dragons and school commitments, Karl played at the Hampton Rovers with six junior games in 2011 and he represented the seniors on one occasion in 2012.

Also picked up was Jayden Hunt who was selected by Melbourne at pick 57. He played 10 games for the Rovers U16s in 2011 and becomes the third former Hampton player now at the Dees.

The club congratulates all three players on this great achievement and wishes them all the best in their AFL careers.