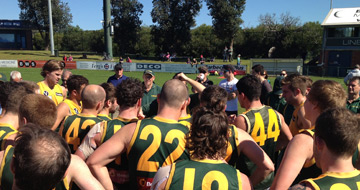 The Hampton Rovers Amateur Football Club, competing in VAFA Premier C Section, is currently seeking a Reserves Coach for season 2014 and beyond.

The Hampton Rovers are a strong Club which possesses an equally strong brand within the community.

2013 was a successful season for Club, with the Reserves team finishing the home and away season in second position, and the Senior team winning the Division 1 premiership, earning immediate promotion back to Premier C Section for the 2014 season.

We are seeking a non-playing or playing coach who has at least a current Level 1 Coaching Accreditation.

Recruiting is well under way and season 2014 is looking to be another prosperous season for the Hampton Rovers. The club has outstanding facilities including a first-class playing surface at Boss James Reserve.

As well as seeking a Reserves Coach for 2014, the Hampton Rovers also have two newly created positions available for the 2014 season.

All applications to be made to the President via email: matthew.clarke.gray@gmail.com