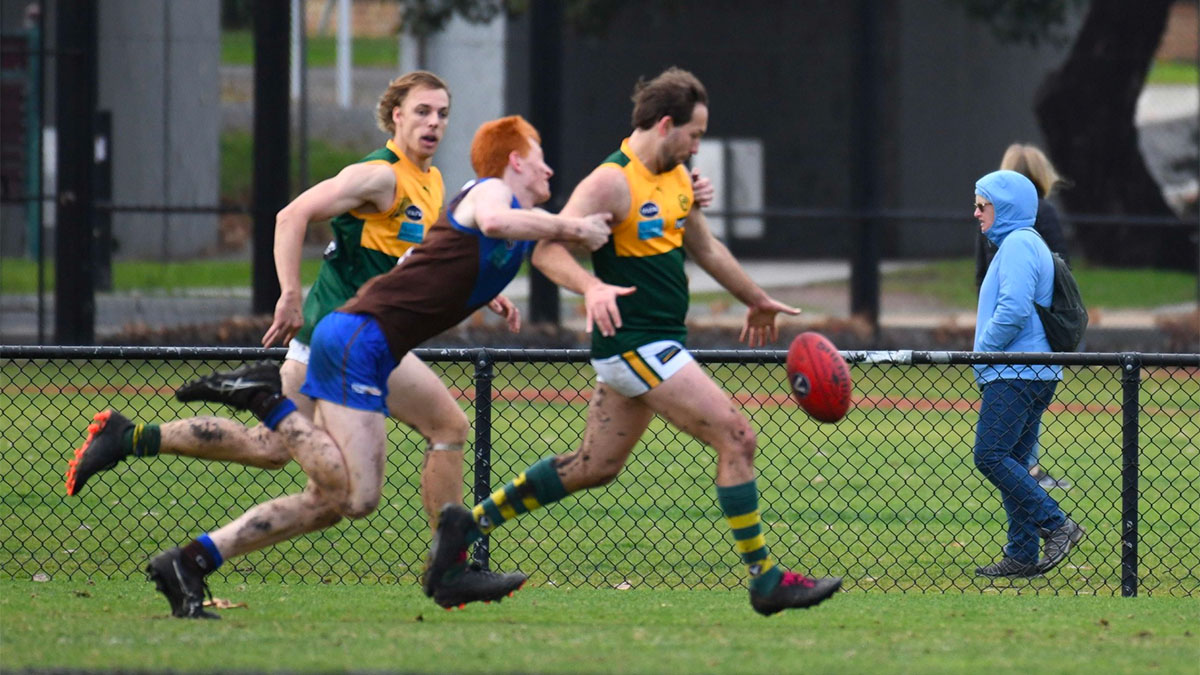 It was similar conditions to the previous night in which the Seniors went down to Ormond under lights, however the rain had stopped and the visibility had vastly improved!

The Rovers started at a frenetic pace with the ball whipping from one end of the ground to the other but with little damage being done on the scoreboard.  Joey Wilson was dominant around the ground and on the times he went forward he seemed dangerous.  Likewise, Corey Jones, playing his 250th game for the club, was putting in a blinder. His contested marking in the ordinary conditions was a highlight.  Nick Jackson had a big job at full back on a large forward and in a couple of one out contests did well to hold his own. Dylan Melnjak was looking his cool, calm and collected self on the backline and improved as the quarter progressed.  At the quarter time break although the Rovers were kicking against the breeze, held a small lead which was well earned.

In the second quarter with the wind, the Rovers’ confidence and possession of the ball both improved. Corey took a great mark at CHF and kicked accurately. A few minutes later, quick ball movement forward resulted in Joey Wilson on the lead mark and from 50m, he goaled.  The ball was locked in the Rovers forward 50 and when Joey Wilson made three efforts to get the loose ball and finally managed to knock it to Michael Garbelotto, who tapped it on to Oscar Donald in the square it was an easy goal.   The sweetener was the mark Garbo took 50m out straight in front right on the siren. He kicked accurately for Hampton’s fourth goal for the quarter and a 25 point half time lead.

The Rovers kicked a point against a building wind in the third, while Ormond managed 3.2 with the benefit of it.  The Ormond boys had their tails up and let their opponents know on a few occasions.

The first bounce of the final term and Scott Ebbott out of the centre to the leading Joey Wilson who marked and goaled.  Next up Benji Audige tapped to Garbo who hit Mat Rieniets lace out and the second was on the board.  James Prosser then began his run of centre clearances.  The first was to Corey Jones for a mark and goal, the second was a charge through the square, a long handball to Joey Wilson who popped through his third for the game.  The third was another Pross clearance from the centre down to half forward where Joey Wilson made three efforts to get the loose ball, break free of the Ormond backs and bang through a mongrel punt for a goal.

The fifth goal for the quarter was from a solid mark by Hugo Twigg 30m out and he put it through. The Rovers were on fire and James Prosser was everywhere. His dominance was rewarded with a goal when he intercepted the errant defenders kick and kicked accurately from 45m.

At the 24 minute mark of the quarter, Corey took another great mark about 15m out on a 45 degree angle, he kicked hurriedly and unfortunately missed. In the end, it was a big 40 point win to the Rovers Ressies.