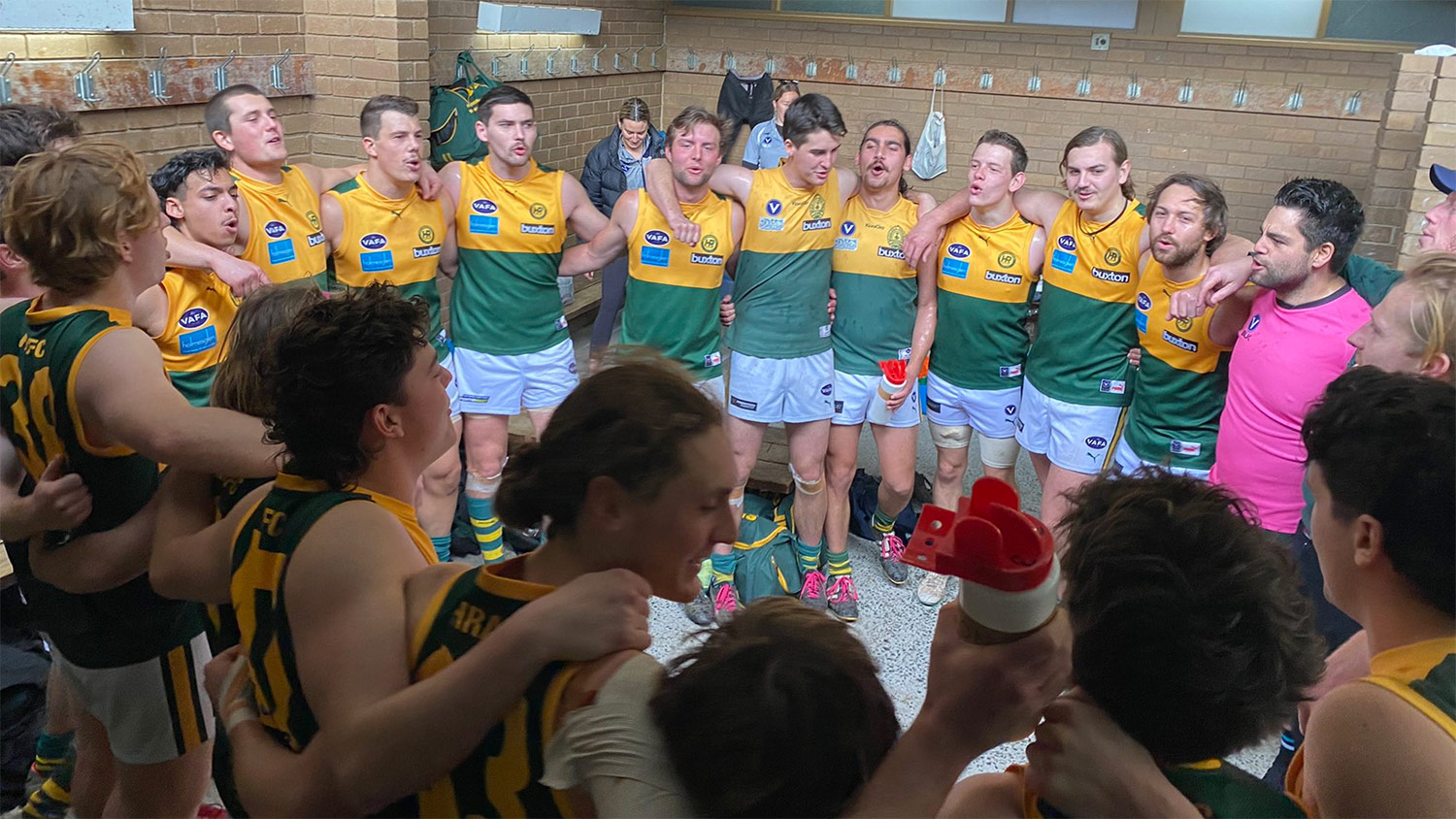 After a 3 week break it was back to the footy ground on a nice sunny day with a brisk northerly breeze to contend with. The Rovers slim finals chance alive versus a bottom dweller so confidence was high.

Mentone kicking with the benefit of a 2 goal breeze in the first quarter were better out of the blocks. From the start Mentone looked a bit more switched on – they were getting good clearance from the centre bounce and using the North side of the ground from defence into attack to make the most of the wind.  The Rovers backs were under the pump but generally standing up well. Jewell noticeable with good smothers and providing nice blocks on the forwards while McKenzie stopping his direct opponent well in the last line, despite repeated deep entries. The ball was to & fro for both sides, very scrambly attempts at teamwork showing the rust had set in over the break. Gallagher was the shining light in the forward line but otherwise the connection between the Rovers mids and the forward line didn’t quite gel, leading to easy turnovers to the Mentone defenders to clear.  Mentone forwards (especially # 57) started holding their marks and were really looking dangerous. A 50m penalty to one of their forwards finally getting the first goal on the scoreboard. It wasn’t long after when Mentone #57 took a mark from a behind kick in and kicked Mentone’s 2nd goal and they looked in control. However in the last 3 minutes of the qtr the Rovers started to click. Bowditch was playing well in the middle and getting the ball deep but unfortunately a couple of HR shots on goal went wide. But from one of the kickouts the forward pressure by the Rovers trapped the ball deep and finally getting their first goal courtesy of a snap/dribble by Huggy. A couple more shots missed and just when on a roll, the siren went.

With the benefit of the breeze and momentum the Rovers got a quick goal (by Gallagher) from a relayed free kick downfield to hit the lead. The skills were still lacking a bit and Mentone still in control of the air so a low scoring game continued until a beautiful pass from De Wolf to Jones resulted in the second Rovers goal for the quarter. Dillon snapped a beautiful goal and suddenly there was a gap opening up for the Rovers. Mentone did manage a late reply goal courtesy of another 50m penalty and had another set shot at goal after the siren, courtesy of another 50m penalty, but fortunately it went wide.  I thought standouts for the Rovers for the quarter were Woolston, De Wolf and Garrow. The Rovers comfortably winning the quarter and unlucky to not score another goal or 2.

With the aid of the breeze Mentone goaled quickly and margin was cut to 2 points and threatening again. But the Rovers responded well with a goal to Twigg on the end of a very neat pass by Hug. The backs and the mids for the Rovers were combining well and entries into the forward line improved. Deighton was on fire and a good pass by Woolston to Jones allowed him to bend the footy through the goal sticks from deep in the forward pocket. Hug and Twigg combined for another shot but unfortunately missed. Mentone got their second late in the quarter but really this was the Rovers best qtr – kicking into the breeze but outscoring the opposition with 6 scoring shots versus 3. Donald and Pav playing well down back.

Kicking with the aid of the breeze it should have been game over for the Rovers but Mentone refused to give in. The game seemed in fact to become a little scrappy with pressure tackling leading to repeated turnovers. While the tackling was a highlight it stopped the flow of the game. Dillon breaking the nexus and provided one for the highlight reel with a delightful snap on goal from a ruck contest. Mentone didn’t throw in the towel and responded with a goal of their own to keep some interest in the game. Gag’s however finished off his good day with a second goal for the afternoon to end the game. There was a bit of a dust up which resulted in a player from both sides being sent off by the ump but it was pretty much all over. The Rovers overall could have finished further in front but missed a few gettable goals over the afternoon.

Report by Jennie and Al Jones