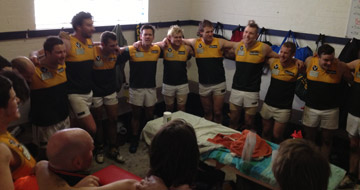 The Hampton Rovers Reserves had a magnificent six-point victory over top-side Old Geelong at Como Park on Saturday to go second on the ladder and relegate them from top to third.

By the last quarter the Rovers didnt have anyone left on the bench and with only eight points separating the teams at the final break it was going to be a hard slog to the finish.  In the end it was skipper Jack Baxters long kick from 50 metres to the square that was helped through by coach Michael Flahive that put the Ressies five points ahead with only a couple of minutes to go.

All day it had been a hard tough contest. The bigger bodies of Old Geelong did some damage early with Nick Jewel, after a fine start, taking a heavy knock in a marking contest right on the quarter time bell and in the second, Woody Trevillan, popping a shoulder, which left the Rovers with 20 players early in the game.

The conditions were made for club legend Steve Anderson and he knocked up getting kicks all over the ground. The ball seemed to follow him all day. It was clearly not a day for talls and the abundance we had make a mockery of our seaside roots  the wetter it became the less impact they all had on the game.

It was the Rovers midfielders who led the way. Shem Curry, whether around the centre or dropping deep into defence regularly stopped Old Geelongs attacks and made the play.  Bryce Pewtress, playing wing or half forward did a number of clever things in the slippery conditions that showed his skills.  Jack Baxter kept running all day and it was in part due to his efforts in the last when the Rovers didnt have any rotations left that got us over the line.

Down back the old team of Benny Kezilas and Lachie Wheeler were miserly on their Old Geelong opponents and often combined well while at the other end of the ground, Brenton Holt was in and under and showing great elusiveness.

Mathew Law, showing a return to that scintillating U19 form of past seasons and Kyal McNeil, playing through the centre, both had impact on the game and it was surprising how often Kyal found himself in space on the wide expanses of Como Park.

In the end a well-deserved win to the Rovers Reserves that now sees them half a game clear in second place on the ladder with games against sides in the bottom half of the ladder to come.