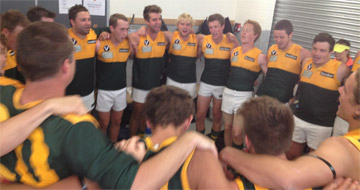 The Rovers reserves have continued their positive start to the year with another hard fought win away to Bulleen Templestowe.

In warm and gusty conditions at Ted Ajani Reserve it was the Rovers who got off to a fast start, kicking four goals to Bulleens two, to head into the quarter time break with a 12-point lead.

The second quarter saw a more even contest, with Bulleen trying to use the wind to the most of its advantage, but it was through the grunt work of Daniel Junior Andersen and stand-in captain Liam Woodland, along with the class of Shem Curry in the middle that ensured the Rovers would head in to the halftime break with the match locked at 33 a piece.

Just before the halftime siren, in an act that personifies his nature and the way he goes about his football, Junior put his body on the line and copped the biggest hit since Totos Africa. His courage no doubt spurred on the rest of the side for their second half performance.

As the teams lined up to start the second half, a Rover was asked hows the bloke who copped that hit for you boys travelling?, for which the Rover responded, hes starting in the guts mate, so you tell me.

Junior and his midfield brigade continued their dominant clearance work in the second half which was capitalised on by the forward line, in particular Chris Long (3 goals) and coach Michael Flahive (2 goals), with Junior kicking two goals from the midfield himself.

The Rovers went into the three quarter time break with a 19-point lead, but with Bulleen kicking with the wind, it was not going to be an easy task to keep them at bay.

In a hard-fought, and at times, heated last quarter, the Rovers backline, helped by the run of Ben Clark and Mark Short, along with the leadership of Ben Banger Kezilas and the presence and poise of big Ryan Rabbi Rabs the Rabble Warren (who was stiff not to get into the best, just saying), were able to respond to the pressure being put on by Bulleen.

Bulleen had the chance to level the game with a set shot from the goal square, with a few minuted remaining, but the man who resembled a Hammerhead Shark wasnt able to convert, with the Rovers able to hold on for a gutsy four-point win, continuing their perfect start to the 2013 season.

Special mention to the Prez, Mitzi Gray, for getting his hands dirty and pulling on the boots to ensure the side didnt play the game a man down from the start, and providing a great lead-up target from the forward line.

An undermanned Rovers Club XVIII side went down to Williamstown at the Boss, but there were notable performances from Steve Anderson and Russel Howe.

Next week the Rovers host Williamstown at the Boss, while the Clubbies are away to Therry Penola.

Dont forget to book your tickets for next weeks Ladies Lunch and for the Ladies Night function following the games against Williamstown. Click here for details >