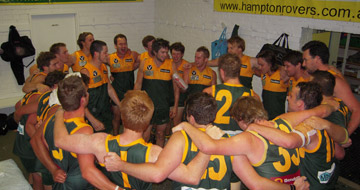 A new look Rovers reserves side made a successful start to the 2013 season with an impressive four goal win over Ormond.

New captain Jack Baxter won his first coin toss, which turned out to be a game changer, with the Rovers kicking with a four goal wind in the first quarter.

Hard work around the stoppages from Baxter, Jason Zampaglione and Liam Woodland, along with dominant ruck work from Rob Bibby allowed the Rovers to fully capitalise on the strong breeze, jumping to a five goal quarter time lead.

A stellar performance from Bryce Pewtress, owning the Bluff Rd wing all day, along with a solid collaborative effort from the Rovers backline, lead by the run of Shem Curry and Mark Short, and the grunt work by best-on-ground Ben Clarke meant that that five goal lead was never truly tested for the remainder of the game.

Jase McCoy lead and marked well up forward and was justly rewarded for his efforts, kicking five goals.

Special mentions for Rovers first gamers; Woody Trevillian, who was resilient at Full Back all game, Chris Long, whose tireless effort and pressure in the forward line set the bench mark for the rest of the side, and Charlie Miles who was a massive presence all over the ground.

A few junk time goals by Ormond meant the result ended in a 23 point win for the Rovers, but the performance reflected a larger deficit in the teams performances.

The newly reinstated Rovers Thirds side also had an extremely dominant 11 goal win against Whitefriars, meaning the competition for spots is the healthiest it has been for some time. Which can only be viewed as a positive for the club.

Next week the Rovers play away against Prahran Assumption looking to continue their positive start to the year, while the Thirds will host Emmaus St Leos at the Boss.