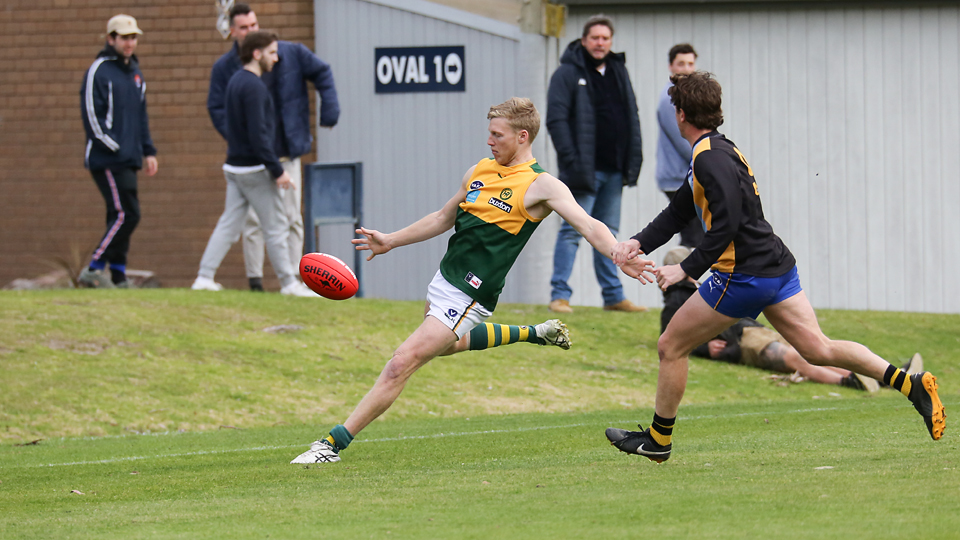 Seemingly out of nowhere, a magical final quarter from the Rovers sealed a 14-point win over Old Mentonians at Keysborough on Saturday.

With not much going right, Hampton were as much as 33 points down in the third term, but stepped up in the final 30 minutes to record their first victory since the last time the two teams met, and in the process, keep their finals chances alive.

Hampton started the first quarter slowly.  Old Mentonians had 2.3 on the board before we had troubled the scorer.  The Rovers were putting some good passages of play together but were falling down the further forward we went.  Luke Deville and Rich Atkins down back were creating opportunities with Cam Morris and Ben Kneebush linking well through the midfield, but up forward marks were dropped, kicks intercepted, and we were just that little bit off song.

In the final minutes of the quarter, we kicked 3 behinds to be 13 points down at the break.  Joel Melnjak was competing well in the ruck, Sam Seach was getting the ball, Ryan Fogarty was battling hard, but it was a case of too many not doing enough.

The second quarter was an arm wrestle.  The difference being that Mentone were making the most of their forays forward while we could only kick behinds.  A slamming tackle by the skipper in the opening minutes set the standard for the quarter but the home side were up to the challenge and it seemed that the Rovers were under pressure with every possession they gained.

At the 6 minute mark, Luke Deville went down behind play, but even that incident failed to spur the boys on.  There were some clever passages of play, Oscar Roberts’ pass to Max Coughlin and Rich Atkins to Fogs and a bullet like pass to Mat Rieniets whose kick just veered at the last moment for a point.  It was left to Carnovale to again be rewarded for the big tackle and calmly went back and slotted the goal.  Unfortunately, Mentone responded after the siren after an easy mark directly in front.  While 21 points down, scoring shots were just about even and the Rovers were still in with a chance.

At the main break, the boys were still confident.  With Oscar out with a leg injury, the coaching staff made some moves with Joel Melnjak playing a closer tag on the OM ruck, Danny Corp played further up the ground and Cam Morris was to take the rucking duties in the forward line.  The backs had been playing well, Crispy and Ryan Leslie were on top of their opponents, and Liam McCartney was playing his most solid game of the season.

Still, when Mentone kicked the first goal of the third quarter via a Rovers error, some were concerned the floodgates may open.  Thankfully, the Rovers lifted, Speedy was the beneficiary of some great teamwork to kick an easy goal from the square and when Ben Kneebush was harshly dealt with by the Mentone ruck, the subsequent free and penalty resulted in a much needed goal.  The Rovers had their tails up, but that was short-lived.   Mentone banged on the next 3 goals in as many minutes to extend the lead to over 5 goals – the highest margin of the game – and the contest look as good as done.

Then another twist. Ed Turner who had been prominent early, picked up a free kick but missed the shot on goal and then a few minutes later accepted the pass from Josh McPherson to kick our third goal for the quarter, to be followed quickly by Cam Morris passing to Ben Kneebush who snapped truly for a goal. Hampton had the momentum going into the final break.

Still, 22 points down with a quarter to play, never a good position to be in out at Keysborough.    Strangely it was a different Rovers team that came out for the final quarter.  The boys tackled hard and didn’t give any easy possessions and just kept forcing the ball forward.  The prime movers in this were Harry McIntyre and Christian Carnovale. Harry with strong play kicked a couple of crucial goals at the start of the quarter, Max Coughlin took a strong mark at CHF and kicked accurately from 50m, the skipper was just hard in for the ball for the full 34 minutes and knocked up getting possessions.

The Rovers were running all over Mentone and you could see the players lift all around the ground.  We peppered the goals with the aid of the breeze, kicking 5.8 plus a couple of out on the full, to Mentone’s sole 2 points.  The boys played possession footy, precise passes to their teammates, some great marking up forward, strong tackling pressure and great blocking and we were looking like the Rovers of … April!  Our backs with Max Van Der Stratten, Rich Atkins and Harry Crisp on the last line became impenetrable.  Luke Deville, back on the ground, was demanding the ball and the half backs in Liam McCartney and Ben Kneebush were well on top.  There was some great team play by the Rovers and our goals were all the result of slick ball movement.

A great mark to Ed Turner at halfback, a quick pass to Daniel Corp who hit Max Coughlin lace out was a treat.  His 50m shot was accurate.  This was quickly followed by a mark on the lead to Matt Rieniets, who passed to Lachy Cairns for the sealer.

To be 33 points down midway through the third quarter and come home with the wet sail to record a 12 point win was undoubtedly the Rovers’ comeback of the year.

Season 2021 is not yet over for the Rovers.  Four games to go in the Premier C campaign, two of them against the two bottom sides and we are still a chance for a bit of finals footy.  In any event, next Saturday we’re home at the Boss against Old Geelong, a team in the four who we haven’t played so far this year.

The seniors victory capped off a magical day for the club, with all five senior teams recording wins (including a win by forfeit for the Thirds).

First up, the Rovers Women recorded a convincing win over Ajax in the 2nd Semi Final at Castlefield, to advance straight to the Grand Final.

Chadstone were forced to forfeit the Thirds game at Boss James Reserve, handing Rovers the victory in the final game of the regular season. Hampton finished on top of the ladder and will host the 2nd Semi Final against St Mary’s Salesian this Saturday – 9:20am at Boss James Reserve.

The Under 19s finally got a chance to take on Old McKinnon/Glen Eira, for the first time since the 2019 Grand Final, and it was a repeat of that game, with the Rovers running out convincing winners. The Reserves also got the job done, defeating Old Mentonians in the early game.