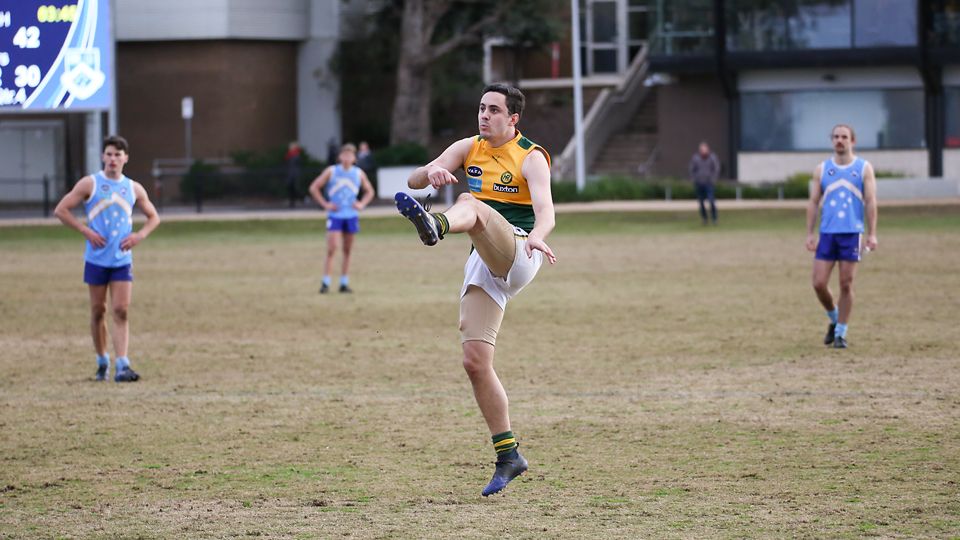 It was a much-improved performance by the seniors on Saturday, at times dominating the ladder leaders but failing to convert on the scoreboard, going down to Monash by 25 points.

With six changes going into the game, a plethora of injuries and unavailability, and facing the undefeated Monash Blues on their home deck, it’s fair to say some of the travelling Rovers supporters were a tad worried. Although, the last time the two teams met, it was the Blues’ narrowest defeat of the season.

Monash University at Clayton was uncharacteristically windless and while the ground was wet underfoot, it wasn’t raining which is a rarity out there.

The game started in similar fashion to a number of recent games. Monash came out hard and by the 12th minute of the first quarter, had kicked 4.2 to our lonely point.  Our backs then seemed to steady, Max Van Der Stratten, in his first game back for a month, took a couple of marks, Rich Atkins and Joel Melnjak were covering their opponents, Harry Crisp was intercepting and you could feel the Monash momentum stop.  Ben Audige up against the Monash giant who must be close to 210mm was holding his own and gradually our mids were having an influence on the contest and for the next 20 minutes both teams were virtually scoreless in a tense arm wrestle.

In the second term, we had the benefit of a slight breeze and in one of the most frustrating quarters for the year, managed to kick 1.9 to their 1.0!  Ten scoring shots to one.  I think we hit the post 3 times and just totally dominated the opposition, while not able to put a score on the board.  Speedy was regaining form, Oscar Roberts was presenting for the marking opportunities, Ant Folino was looking dangerous, but we just couldn’t score. Our backs were well on top and the spread, run and carry that Monash relied upon in the first ten minutes of the game had disappeared.

Our goal came from a hard sprint from Speedy, a baulk and then a snap under enormous pressure that went through for the goal. Probably a harder goal than all of the previous opportunities that we had.  At the main break we were 20 points down, but had total dominance for the quarter.  I know, but we had only kicked a solitary goal!

The third quarter would be critical.  Monash had advantage of the breeze, but would they capitalise?   The answer was a resounding no.  Lachie Cairns kicked a quick ball forward that was pounced on by Speedy who goaled. Monash answered quickly.  Again, an arm wrestle where I thought that our tackling pressure and forward pressure on Monash had us on top all around the ground.  The noisy Monash bench quietened as we eased slowly closer.

When Ant Folino earned the free and Dylan Melnjak goaled the gap had closed to 13 points, and we were in with a chance. Carny was willing his charges forward, Max Coughlin on a wing was having influence in the game but boy, do we miss his renowned goal kicking skills up forward!  With Ben Kneebush and Liam McCartney both playing well in defence, Perko and Fogs creating contests in the midfield we were looking good.

Final quarter and a chance to secure a much-needed win. We started in fine form with Carny pushing the ball forward to Speedy who had been improving as the game progressed to notch his third goal for the day.  We were within 7 points and seemingly had control but to Monash’s credit, they regrouped and withstood a 20 minute barrage by the Rovers of attacking football that was not rewarded and topped the day off by popping through a couple of easy goals in the dying minutes, including one after the siren.  Still a great fighting effort by the Rovers with plenty of positives.  You could see the players who have just come back from injury – Cairns, McIntyre, Atkins, Kneebush, Van Der Stratten and Fogarty improving as the game progressed and great to see first-gamer Ben Deighton looking comfortable on the forward line.  Next up, we face Old Ivanhoe away from home, who we accounted for in the opening round.

Don’t forget the Rovers $2K Day – This Sunday at the Boss – Our major fundraiser of the year. Set to be a great day with drinks, lunch and live music included in your ticket, plus a chance to win $2,000. Jump on and buy a ticket from the Rovers Shop today!

The RESERVES pushed all day, but went down to Monash by 42 points in the early game.  Coach Sam Clements was pleased with the effort that the boys showed and in particular praised a couple of youngsters from the U19s having a run in the reserves – Ben Crothers and Lachy Goldsmith – both had fine debuts.   Andrew Wooston featured strongly all day as did Lachy Gallagher and Nick Murnane.  Sammy Raghdo was playing well and great to see Corey Jones having an impact in the forward line.  Harry Hodges threw himself into the game from the first bounce and was going just as strongly at the end.  Good to see Oscar Donald after that serious head injury a few weeks ago back in the twos and playing well.  Monash were a bit too strong but we came home over the top of them in the last quarter to show some positive signs.

The THIRDS recorded another big victory – this time 96 points over UHS-VU at Boss James Reserve.  Great to see veterans Ash Fisher and Michael Flahive pulling on the boots.  Zac Pirrie, coach of our U19s having a run before their big game as was assistant coach of the U19s Tom Marron having a run.  They must have decided to show their young charges in the later game how to do it! Great to see Jack Campion and Matty Innes both having a run around on a beautiful Melbourne morning.