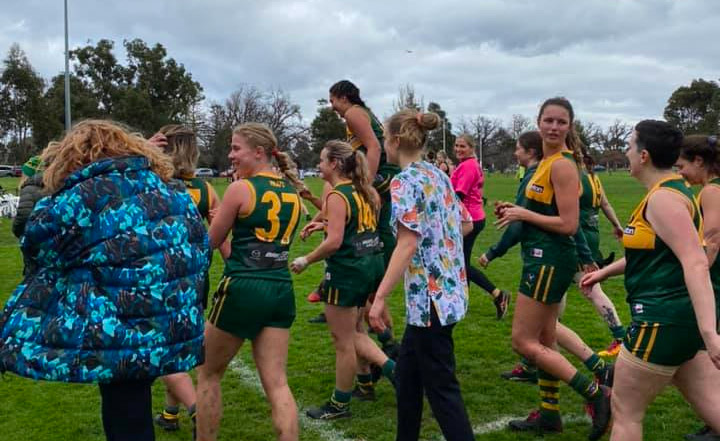 The Rovers Women played away this week against Power House in wet slippery conditions at Ross Gregory Oval, hoping to come away with a win and consolidate their position as ladder leaders.

When the match got underway it was clear early on that the game was going to be a bit of a slog with the ball slipping and sliding around like a piece of soap!

Our girls adapted very quickly as they were prepared to get ‘down and dirty‘ to win the footy or even just get it moving in our direction in any way they could.  Jasmina Andros and Tayla Jones both kicked goals in the first quarter continuing on from their great form last week.

Shae Raymond was playing really well in her 50th game!  We also had two new Rovers Women’s players, Amber Lotzof and Lucy Mitchell, who were getting right amongst it with skill and determination.

There was a bit of niggle going on between the sides so at the break Corey had stressed to the girls not to get sucked into this and to just focus on our game and our attack on getting the footy.

Early in the second quarter Power House opened their account with a strong mark and goal however around the ground we were putting together some very nice football.

It was good to have Hayley Gould back from injury as she was picking up disposals at will and she obviously was enjoying being back running around again with the Rovers early on a Saturday morning!

Greta Robertson kicked a clever goal off the ground and it was very valuable in the context of a scrappy low scoring contest.  Bree-Anna Kavanagh was in everything as usual,  she just loves going in hard and getting the football.  Isabella Cameron was taking on the opposition and racking up the possessions.

Into the third quarter and our magnificent backline was holding their structure and had repelled anything that came their way.

A early goal for from first gamer Amber sent the girls into a spin and really got the team excited and revved up!

Mandy who was playing on with a massive corky, as brave as ever and she continued to intercept any forward move that the opposition made.

Maxine was showing what a valuable player she is to our team with her sublime ball skills and run- throughs.

A second goal to Greta and the Rovers were now in a strong position.

After the initial strong challenge by Power House, our girls through true grit, focus and effort had now got the game under our terms.  Bianca was working tirelessly in the ruck, Kristy was going in hard as always and feeding the ball out to our runners such as Stephanie, Casey and Isabel.

Late into the last in our forward line Bree came through the pack, booted the ball off the ground straight through for another Rovers goal. The girls knew they had a match sewn up even though Power House did get the lady goal right on the final siren.

All in all a gutsy hard fought win by our amazing women’s Hampton Rovers!

* A special mention to one of the injured Rovers teammates, Emily Johnson who is doing an awesome job as fill in team manager. Thanks heaps MJ!