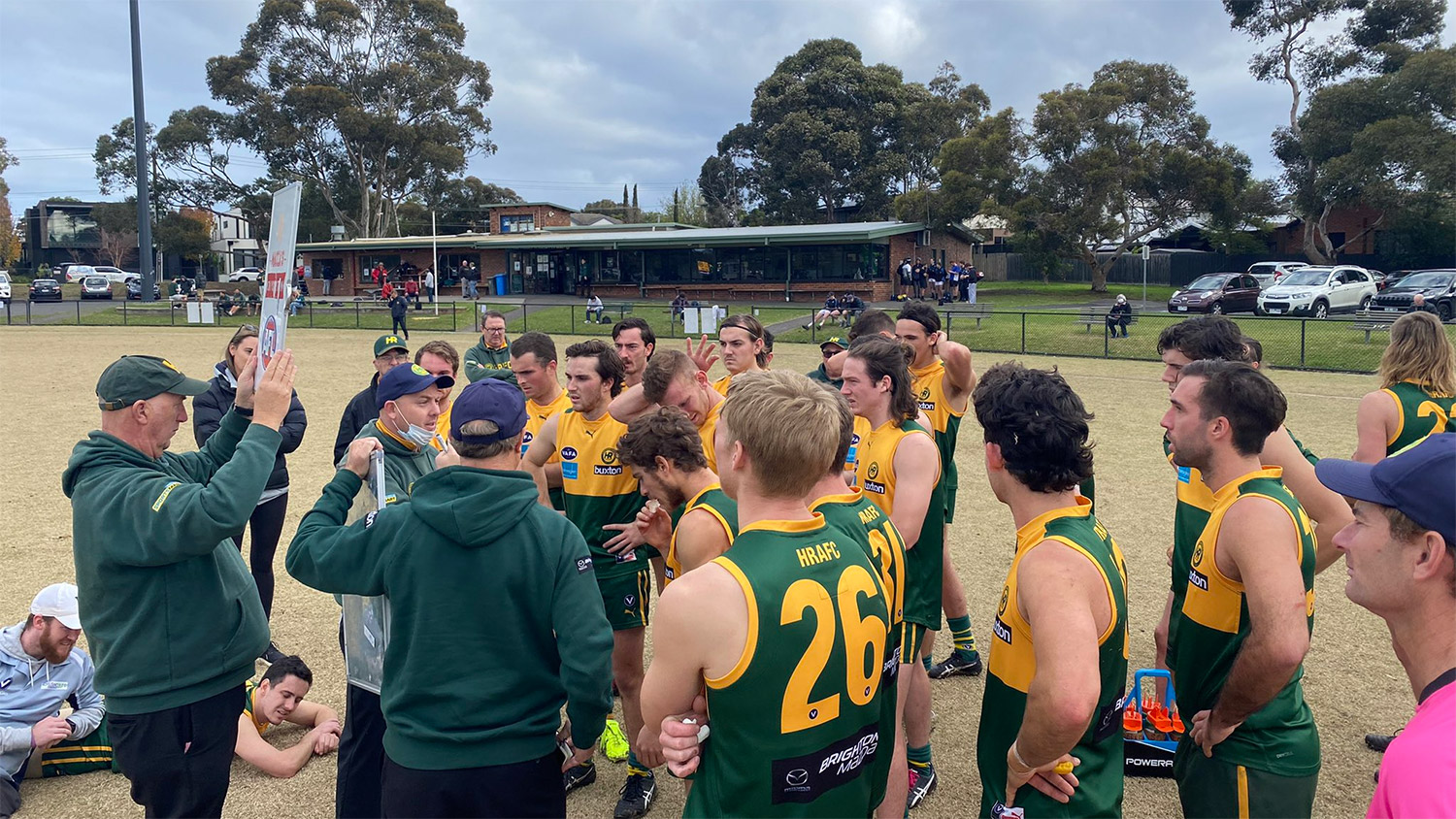 In a repeat of round 7, the last time footy was played, Mazenod proved too strong for the Rovers, running out convincing victors, this time at Boss James Reserve.

The Rovers couldn’t take a trick and never really got going in what was a strange day, with a smallish crowd due to covid restrictions and the famous Hampton Rovers home game luncheon missing for the first time in many years.

We did start brightly with some good team play by Sam Seach and Ed Turner who got it to Sam Bradford and we had a goal on the scoreboard inside the first minute.  But that was it for the quarter. Mazenod, as they did a month ago, banged on 5 straight to lead by 20 points at the break.  The highlight was without doubt Crispy herding his elusive opponent long enough for Cam Morris to come from nowhere to hit him with the perfect tackle and gain the free.  Benji, as he did last time against them, dominated in the ruck but our mids just couldn’t take advantage of his good tap work.

The first 15 minutes of the second quarter was all Mazenod. They kicked 4.1 to be at one stage 9.2 to our measly 1.8.  Bad kicking is bad footy. Thankfully, we then hit our straps and with a coast-to-coast goal by Christian Carnovale, followed by another great effort by the captain to pass the ball to Jackson Manning who kicked truly and the third to Ed Turner after a hard earned free 40m out.

We seemed to be in with a chance.  At the 25 minute mark disaster struck when Jackson Manning, in his fifth game back from a knee reco in his first game for us in 2019,  damaged his knee again and judging by his reaction, it was not good.  Such a shame when he was just starting to show what a classy footballer he is.  While Mazenod had doubled their lead, we were still fighting to stay in the game.  An unfortunate 50m penalty against us for incorrect delivery of the ball after a free was disappointing. It let Mazenod in for their fifth goal for the quarter.  Another low point of the quarter was when Nath Smith earned the free from a dangerous sling tackle and awarded a 25m penalty only to throw it all away by remonstrating with his opponent.

At halftime the rooms were the walking wounded.  Manno gone and Pross nursing his shoulder.  A few were clearly short of touch and match fitness, Rich Atkins having his first game for about 6 weeks as were Oscar Roberts and Josh McPherson. They can only get better with a game under their belts.

The Nodders came out hard in the third quarter.  They had 3 on the board in the first 10 minutes and it was really game over.  It was amazing just how accurate their goal kicking was, another 6.3 for the quarter, many of the shots on the run and under pressure.  Still, there were some bright spots for the Rovers. Benji Audige continued to clearly win in the ruck and some of his tap work was top class, Liam McCartney in his first game back in the seniors for a while looked cool, calm and collected all day and of course the skipper just kept throwing himself into the contests.  Perko was a ball magnet but we just weren’t able to take advantage of his penetrating kicks into the forward fifty.

The last quarter was goal for goal for the first 20 minutes.  With goals to Ant Folino and Sam Seach, we matched the opposition, but when Sam Seach came off with a leg injury you could feel that the floodgates were about to open, and they did. Mazenod kicked the last 4 goals of the quarter.  I thought both Joel and Dylan Melnjak fought hard all day but the speed and accuracy of the Mazenod forward thrusts were hard to counter.  They always seemed to have an extra player at the fall of the ball.  Max Coughlin moved up the ground and enjoyed the freedom of the wing and I thought Oscar Roberts playing at CHF kept getting better as the game progressed. Cam Morris had been having a red hot go all day but came off as another injury casualty.

Still nothing can change the fact that we have suffered two trouncing’s in a row from Mazenod and now face up to top of the ladder Monash Blues this Saturday at Monash Clayton before the two weeks of byes.

In the early game, the Reserves also went down to Mazenod, with a strong second half securing the win for the visitors after a tight opening half. Elsewhere, the Under 19s recorded a big win over Parkdale Vultures and the Senior Women also were big victors over South Melbourne Districts. Click the links to view match reports.

Wrapping up Saturday was the Thirds who took on Old Brighton in a twilight game at Brighton Beach Oval. With plenty of numbers to choose from, it was a good Rovers side that took the field for the 4:45pm game, and as the lights took over, the Rovers ran out big 70-point winners. B. Doolan was best for the Rovers, while the goals were shared between 11 players.

Support the Rovers by purchasing a ticket to our upcoming $2K Draw. It’s set to be a fantastic day at the Boss and every ticket gives you a chance to win $2,000! View full details & buy a ticket online here >