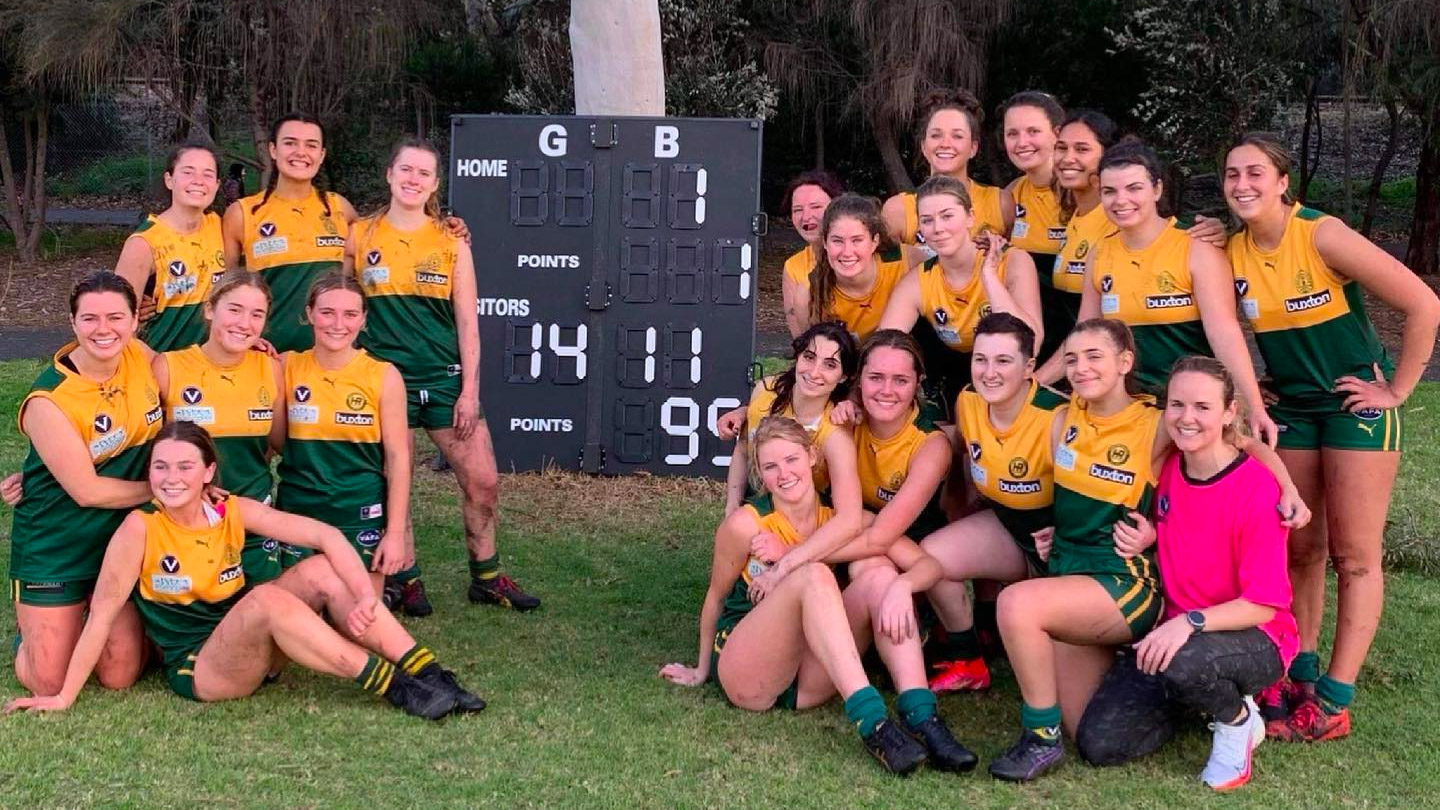 Following the break, the Rovers Senior Women’s team were back in action and recorded a big win South Melbourne Districts at Albert Park.

The Rovers went into the round 10 holding onto top spot on the ladder, while our opponents were seventh, however both teams were super enthusiastic and just looking forward to playing footy again, after not being able to for the past few weeks.

We were quick out of the blocks with the game mostly being played in our forward half but unfortunately our shots for goal were a bit a wayward. That’s not taking anything away from South Melb who were applying good pressure.

However due to our own team’s pressure acts and persistence, towards the end of the quarter we finally broke through with nice goals to both Maegan and Shae.

The quarter finished with Rovers 2 goals and 5 behinds on the board and in front by the same amount!

It was a bit short of Corey’s target he had set the team of 4 goals per quarter, however there was some very good signs such as a total of 9 tackles posted already!

At quarter time Corey gave the girls a challenge, to open up our forward line by not all going for the ball at once and playing wider.  Hopefully this would allow our forwards to get a better chances to run directly at the ball therefore creating easier avenues to goal.

The girls took this on perfectly and straight away the results flowed with some awesome marking and  team plays. Not surprisingly we also ‘found our kicking radar’. It was fantastic to see young Tayla Jones kick her first goal in her first game in the Senior side!

Steph came alight (as she does!) with 3 goals maybe 4 (I couldn’t keep up!) in the quarter and Maegan took a good grab and drove another Rover’s goal straight through the middle.  The quarter was like a highlights reel, Sally Walker’s great marking, Maxine’s great run off the backline complete with a perfect ‘don’t argue’, Kristy’s pick up, twist, turn and pass, Jass’s sheperd and awesome team play, Maegan brilliant mark and second goal.  All and all a great quarter of Rover’s footy.

To their credit South Melb were fighting hard even though they were almost 10 goals down not long into the third. However, our backline led by Mandy and Max were almost impenetrable.  Sav’s intercept mark was a ripper and Casey took off for an awesome 3 bounce run, half the length of the field, she was in blistering form…you could say she was having ‘a blinder’ (google it!)

Unfortunately Sally was accidentally injured in a hard contest. She had to be stretchered off and an ambulance was called.  Luckily we got word that Sally was ok (but very sore)

When the game restarted ‘B’ rallied the team through her leadership, strong ruck work and marking around the ground.

Into the last quarter and although it was obviously a very one-sided game, the Rovers were determined to play their best and stay focused throughout the whole match.  Bella’s skills were often on display throughout the game, none more than her brilliant pick up off her toes in the middle of the muddy centre of the ground.

Greta played a very strong all round team game and it was great to see her finish off with late goal to go with her earlier goal assists. A nice roving goal off the pack in the last quarter to Casey was a also well deserved for the top class effort she’d put in all day.

To top off an excellent game Steph booted two more for the quarter to finish with 7 in all.  Maegan also was in great touch with 3 goals for the game.