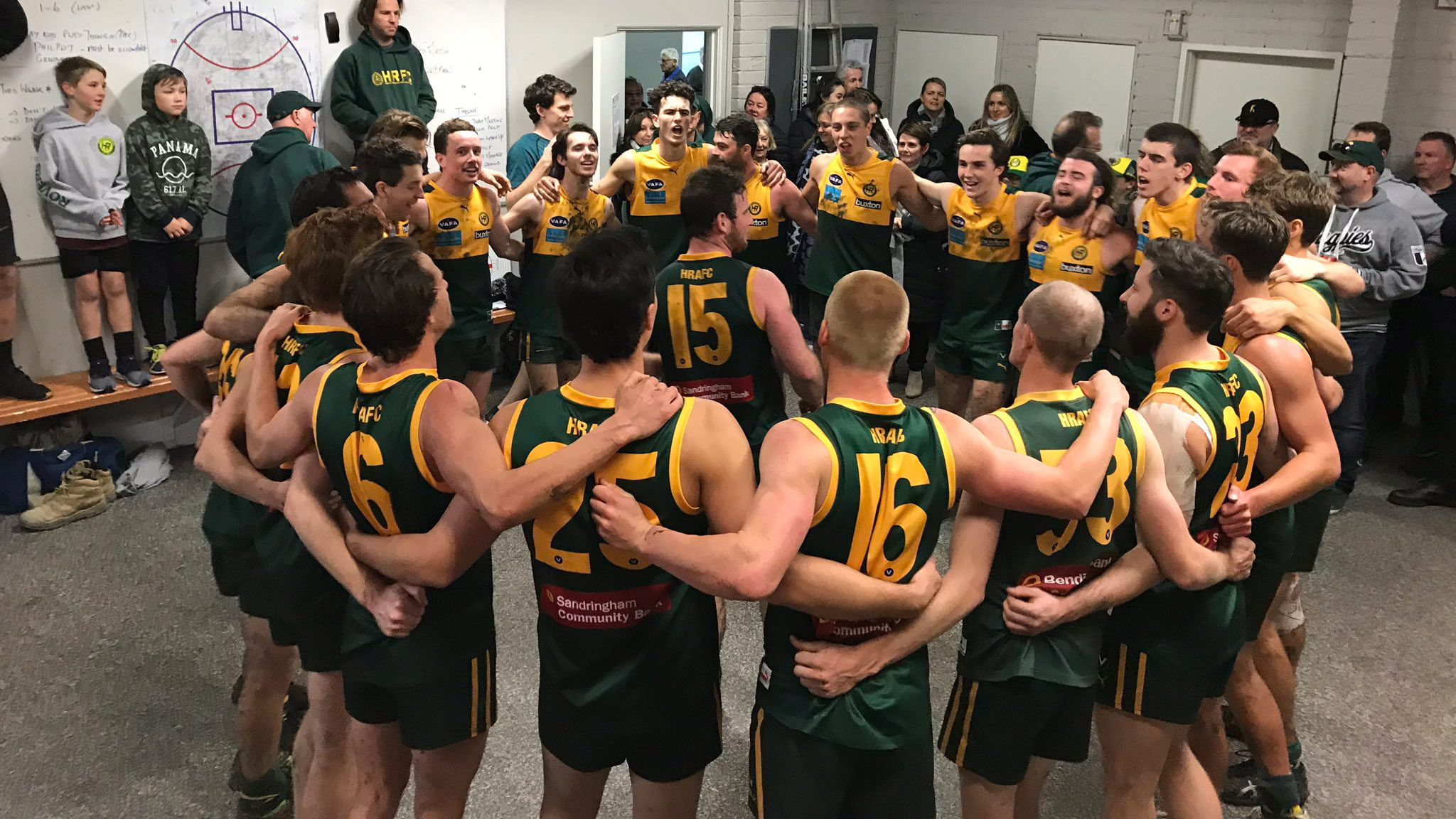 The Rovers hosted bottom side PEGS at the Boss on Saturday and at three-quarter time, it was the visitors leading by 11 points and looking like pulling off an upset.

It looked like being a dismal day for the Rovers, following three quarters of less than ideal footy against a side that has recorded just the one victory, but to their credit have been competitive in most games they’ve played.  Saturday was no exception, they chased, tackled, hassled and ran and really, every supporter at the ground would have thought at the 17-minute mark of the last quarter when PEGS popped through another simple goal, it was game over.

In those early quarters, the Rovers looked slow, poorly skilled and just not on song for what was an important game.  Matty Rieniets was great all day, presenting a target and popping through three in a handy display. Scott Ebbott continued his good form, kicked two and the coach complimented him in a game where he was put under pressure by the opposition and he came out on top.

Sam Bradford was given much space following his recent good form in front of goal and was likely the reason Matty was able to get loose.  Tim Jones was enjoying the challenge of the being the relief ruck and it was his attack on the ball and opponent in the third quarter that really kept us in the game. Even then, the Rovers went from 11 points up to 11 points down at the final break!

At each break, the coach had been upbeat.  “Only 10 minutes of good footy and we’ll break this game wide open” he said, at both the main break and stressed it again at three quarter time. Forever an optimist, but he did have faith in his players that if they followed the team rules and kept up the pressure that eventually the PEGS boys would crack.

At the 17-minute mark of the last quarter, Hampton were running out of time to have the 10 minutes of good footy!  PEGS were on top all over the ground, but the coach did pull two critical moves, Pross went to the centre, Oscar Roberts moved from CHB to CHF and you could feel a change coming over the game.

Immediately after the opposition goal that took them 17 points ahead, Broads tapped to Pross who kicked forward where Nick Murnane goaled from the square. Back to the centre and bang, bouncing Josh Broadley won the tap again and the deep kick forward found Sam Bradford loose and another from the square.

Scores were just about level and again, out of the centre and Oscar Roberts marked the mongrel kick 20m out, straight in front. All of a sudden, the Rovers could do no wrong and when second-gamer Harrison McIntyre marked outside 50m and with the benefit of the breeze banged it through, it appeared the Rovers had the game in the bag. In the last few minutes, goals to TJ and Ant Folino, who bounced it through from 40 metres, and the Rovers had seized victory in 10 minutes from the jaws of defeat, with the final winning margin 25 points.

Great to see Lachie Cairns make a return to the seniors after that shocking broken leg in last year’s Grand Final and contribute to the victory.

The Rovers now find themselves with a 4-4 record, winning four of their past five matches, and in sixth position on the Premier C ladder, going into the weekend off. Next up, it’s an away trip to Williamstown to face the top of the ladder CY’s at the VFL ground.

It was another good Saturday for the Rovers with four of our give teams winning, this time it was just the Thirds that fell short.

In the early game at the Boss, the Reserves also finished strongly to record a 13-point victory over PEGS. Full Report >

It was one-way traffic in the Under 19’s, with the Rovers annihilating Old Mentonians to the tune of 138 points. Final score 26.15.171 to 4.9.33 at Castlefield Reserve. Cam Morris and Max Coughlin with four goals each, and Harry de Wolfe also amongst the best. Full Report >

The Senior Women recorded an incredible victory over the previously-undefeated Preston Bullants under lights away from home, with three late goals snatching the win. Full Report >

The Thirds took on top side Kew in an early game away from home and following two weeks off – a forfeit (by the opposition) and a bye. The start of the week looked promising with a full bench and a set of emergency players for the Rovers. However, come Saturday the team was down to 1 on the bench, even the trainer Brett pulled on the green and gold socks for his first game of footy since u16s. Hampton held its own in the first quarter with scores sitting closely at 14 to 27.

Zach Donald, in his first game back this year from injury, dominated the midfield and proved his skills had not diminished since. Whilst Kew outran the Rovers in the second half, the boys continued to work hard with Fish controlling the forward line taking mark after mark and Wheels making second efforts at every contest. The young u19 boys proved useful in the middle and rucked well over Kews 6ft 4 ruckman.

By the last quarter, players were covered in mud from the middle of the ground and both teams lost control in the centre. Final score, Rvoers 8.5.53 to Kew 20.15.135 who remain undefeated and top of the ladder. A congratulations to Vice-Captain Lachy Edgar on his 100th senior game for the club. We look forward to many more impressive games and dance moves from you. Ash Fisher kicked 3 and Mat Care 2 while Zach Donald and Matt Young were best for the Rovers.

Please note due to the long weekend and no games, there will be no training at Boss James Reserve on Thursday 6th June and no bar/dinner. We do however invite players and supporters to the Hampton RSL from 6pm.