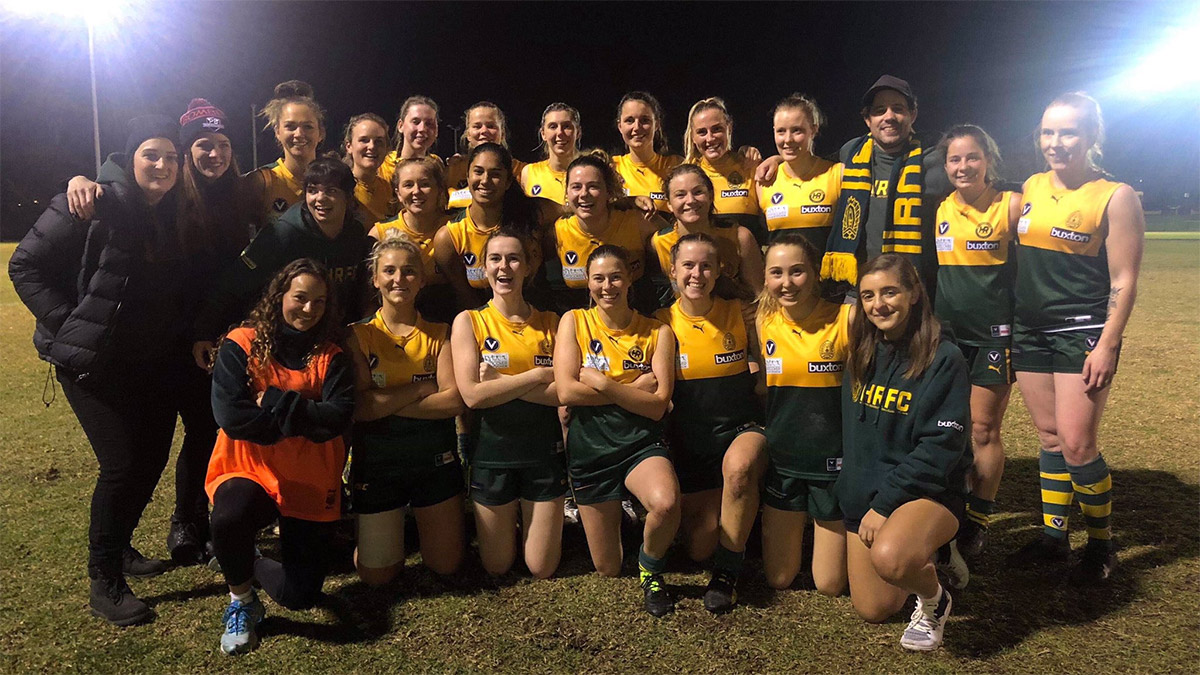 An hour’s drive to the previously undefeated and top of the table Preston at their ‘Bullants nest’ for a twilight game…what a challenge for the Rovers Women team.

Would we be up to it? Would we just hope for an honourable loss? NO WAY…not according to Corey and Paul and by the look on the faces of every single Rovers player as they lined up to do battle before the ball was bounced!

Once the game got underway, you could sense that ‘we were on’!  It was great to see the two Rovers first-gamers, Stacey & Kelly fit right into the Rovers style of play and get amongst it with great commitment.

Zara was repelling everything that came into our backline, Chloe practically owned the Sherrin for the quarter, Taylan gave support with a great backline intercept mark and Kristy was putting on a ‘footy clinic’.

Against all odds as well as the breeze, we managed to get it to Kaitlyn who converted an awesome goal! At quarter time, the scores were Rovers 1.2.8 to Preston 1.0.6.

Preston were showing why they were undefeated as they were a very well drilled side with some very talented players. We did manage to hold them out for the quarter however we were unable to add to our own score.

Some more great footy by Taylan was backed by great tackling and shepherding particularly by Maxine. Bree was simply a ‘ball magnet’ while Nicky’s goal saving tackle was a ripper!  At the main break, it was the Rovers 1.2.8 to Preston 1.1.7.

We were under siege in the third as Preston piled on the pressure. They managed a couple of goals which, in a low scoring contest was going to make it hard from here.

However, with Bianca starting to take control in the ruck and around the ground there was still signs of the Rovers ‘Never Say Die’ attitude!  Kate and Hayley were playing as if their life depended on every contest and there were some early signs that the Rovers weren’t done with just yet!

With the match drifting to an honourable loss for our woman, half way through the last quarter, all of a sudden, through some amazing team plays came a couple of Rovers goals!

Was there going to be time to pull off an incredible win? You bet there was!  When Taylan slotted ‘that final goal’, we had hit the lead and held on desperately for a couple of minutes to record what must be the most famous victory every for the Rovers women’s team.