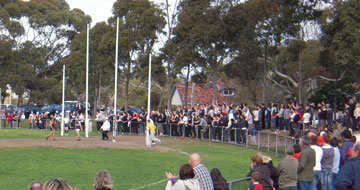 One of the biggest crowds to attend Boss James Reserve was on hand Saturday afternoon to see Old Brighton defeat Caulfield Grammarians by 14 points in the VAFA Under 19 South (1) Grand Final.

The season decider was transferred to the home of the Hampton Rovers Football Club due to the poor condition of Sandringhams Trevor Barker Oval. Despite the unprecedented recent wet Melbourne weather, Boss James Reserve came up reasonably well for the big game.

The David Street ground is used to big attendances with the Rovers regularly attracting large crowds to their games in Premier B section of the VAFA. With great conditions and free entry, the supporters turned out in force with Saturdays attendance estimated at over the 1,500 mark.

Both teams lined up for the playing of the Australian National Anthem. The minor premiers Old Brighton went into the game as strong favourites however it was Caulfield who held the advantage on the scoreboard early on. After a one-goal each first term, Caulfield kicked four goals to two in the second quarter to lead by 10 points at the main break.

With more than a handful of Old Brightons players playing their junior football with the Hampton Rovers, they may have had a slight advantage knowing the ground better than their opponents. In a great third quarter of footy, they kicked six goals to four to hit the lead and hold a one point advantage at the final break.

The game was up for grabs up until the closing stages of the final quarter, however it was Old Brighton who kicked three goals to Caulfields two to hold on and win by 14 points and claim the 2010 VAFA Under 19 South (1) Premiership.