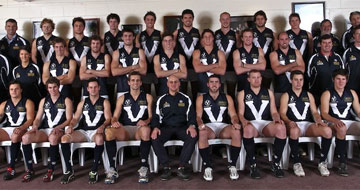 Hampton Rovers players Ryan Semmel and Chris Gleeson have been selected in the VAFA U23 team to take on Tasmania at Ulverstone on Sunday.

The initial squad of 35 players has been trimmed down over recent weeks and the final team was announced Thursday evening at Elsternwick Park.

Ryan Semmel, who was appointed co-captain in 2010, has been a consistent performer in the Rovers midfield since returning to the club in 2008.

Chris Gleeson returned to the Rovers in 2009 and has stepped up to a new level this year with some outstanding performances resulting in 26 goals so far this season.

Ryan and Chris bring the number of Rovers players to wear the Big V jumper thus far in 2010 to four after Guy Martyn played in the Senior game and Jackson Ward played in the U21 game last month.

Sundays game is part of the AAFC Championship and all the action gets underway at 2:00pm at Ulverstone. Live radio coverage is available online at www.coastfm.org.