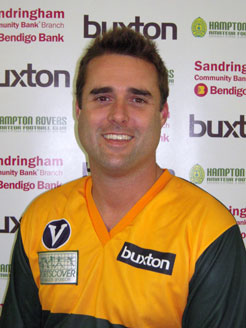 Two-time Rovers premiership player Adam Power plays his 200th VAFA game for the Hampton Rovers this Saturday when he runs out for the Thirds against Mazenod at Boss James Reserve.

This milestone is an outstanding achievement and he joins Anton Duddy and Gerrard Woods who have also played their 200th this year. Along with them, Adam will have is name added to the honour board at Boss James Reserve. The three players will be recognised at a special function the club is hosting on the evening of Saturday 7th August  Hampton Rovers Past & Present Players Night. More details on that will be available soon.

Adam made his Rovers debut in 1994 playing in the Under 19s. It didnt take long for him to play senior football playing a couple of games that year and playing in the Reserves Grand Final the following year.

He had a stint in the VFL with Box Hill in 1997 before returning to the club in 1998 where he played in the Rovers C section premiership. By this time he had become the Rovers main man up front kicking several bags of ten goals in 98 alone. 2001 saw him play in his third Rovers senior premiership with the C section win over Old Essendon.  The following year in B section, Adam won the VAFA goal kicking award.

Adam moved up north for work and played a couple of seasons with the East Coast Eagles in the Sydney AFL. He has returned to Melbourne this year and committed to play the season in the Thirds which has been valuable for the other players to have someone with his experience running around.

This Saturday they take on Mazenod commencing at 11:40am and it would be great to see many Rovers supporters to cheer Adam Power onto the ground in his 200th VAFA game for the club.