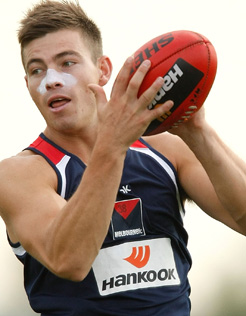 Former Hampton Rovers player Danny Hughes has been selected to make his AFL debut for the Melbourne Football Club when they take on the Western Bulldogs at the MCG on Friday night.

Danny made his debut for the Hampton Rovers in 2001 and played a total of 43 junior games before stepping up to the senior ranks where he went on to play 9 senior games in amongst Sandringham VFL commitments. His last game for the club was in 2005 where he kicked four goals in the seniors win over Therry Penola.

The opportunity for Hughes has come after was promoted onto the primary list for in-form forward Ricky Petterd, who has been moved onto the long-term injury list, after he sustained a shoulder injury against North Melbourne last round. The Demons have also left out defender Joel Macdonald and versatile big man Stef Martin.

In fact, it will be 1607 days from the time he was originally drafted by Melbourne in December 2005, until the day he dons the red and blue for the first time. And the news hasn’t sunk in yet, despite being told by coach Dean Bailey.

“I was told I was in the mix earlier in the week by Dean and he said if I trained well, I was a chance to play. I was then called into Dean’s office and when he told me I was playing I was really nervous when I found out,” Hughes told melbournefc.com.au.

But like former VFL players Geelong’s James Podsiadly and Fremantle’s Michael Barlow, who are shining in 2010, Hughes’ story is one of persistence.

“I was ready to throw the towel in, but my old man was really the only one and my manager Al McDonald, who said ‘stick it out’,” Hughes said.

“I had the pubic symphysis scraped, which is the pubic bone, so that put me out for the longest, but just after I had that, I had my hip [operation]. I then had to have the whole year off [in 2008].

Hughes said he got a part-time job at a sports store in 2008, so he could focus on getting his body correct. He undertook pilates to help him get back on track.

He remained on Melbourne’s rookie list until the end of 2007, but was delisted after that season, after groin/hip injuries cut him down.

After a season of rehabilitation, Hughes was redrafted as a rookie in December 2008. He then impressed with Casey last year and was retained for 2010.

Now at 23 years old, Hughes will wear No.38 in Melbourne’s only Friday night match for the season – the Field of Women clash.

The Hampton Rovers Football Club congratulates Danny Hughes on a well deserved opportunity and wishes him all the best in his AFL debut for Melbourne.