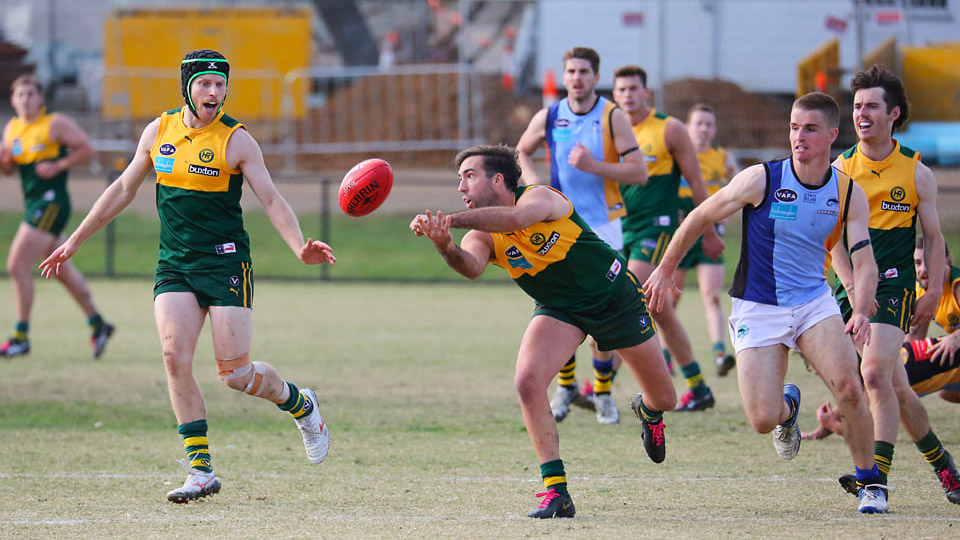 Hampton Rovers suffered a shock loss on Saturday, going down to Old Mentonians by four points in wintry conditions at Boss James Reserve.

The Rovers had a couple of changes including the late one of leading competition goalkicker Nathan Smith out, but his replacement, former Premier B leading goalkicker Ed Turner seemed to relax concerned supporters.

It was a horrible day weather-wise at the Boss, while the ground was dry the gusty south westerly made kicking difficult and with the South Road end of the ground favoured, it was critical to get scores on the board when kicking that way.

The first quarter was an arm wrestle and the Mentone boys, kicking against the wind, controlled the game and bar for a great snap by Carnovale in the first five minutes, neither team registered a major for the quarter. While Benji had the better of the opposition ruck, it seemed that their mids with 8 on the outside driving the ball forward so that our backs were under continuous pressure.  The visitors had a couple of likely looking talls up forward and looking dangerous which made Joel Melnjak and the other Rovers backs work hard.  Rich Atkins was missed in the Rovers backline with his golden fist as we seemed to be out-marked time and again, attempting the mark from behind rather than going the big punch.

A blast from the coach at the first break and the boys seemed to switch on. A pickup by Daniel Corp to Ed Turner and Jackson Manning took the loose ball and goaled. A couple of minutes later ET earned the free for the high tackle and goaled and quickly followed up with a quick lead to the Ben Kneebush bullet which he fumbled, recovered and then grubbed it through from 20m.  At this stage, the Rovers were over 3 goals in front and then seemed to relax to allow them the next three – a couple from kick in errors and the third from a banana from the boundary line.

Hampton steadied with Daniel Corp getting the mark and 50m penalty to nail a certainty.  But OMs didn’t give up and with an apparent midfield advantage they were looking dangerous. At the main break the coach praised James Prosser and Benji for having a real dip and showing aggression in their attack on the ball.  But they had few mates and the Rovers were lucky to have a 9 point lead at the main break.

Rovers had the wind in the third term and really needed to take advantage of it.  That didn’t eventuate. OMs played one loose down back and poorly directed long bombs forward seemed to regularly land in the opposition hands.  Carnovale picked up his second goal within a minute of the quarter starting and his third when Scott Ebbott eluded a couple of opponents and hit the captain 20m out for a goal.  The two Harry’s, McIntyre and DeWolf, had both lifted but generally our poor disposal and a lack of urgency were being punished by a ruthless Mentone.

Ant Folino was more prominent in this quarter and with Dillon Melnjak, in a very lairy helmet, was regaining his poise after a week off with concussion. Fifteen points up at the final break that was extended by a goal to Perko early in the final quarter and the crowd in the Wright Scarlett Pavilion were, for a few minutes, buoyant.  Then the wheels fell off.  Five unanswered goals to Old Mentone largely from Rovers errors and our 24 point lead evaporated and at one point we were 11 points down and looking decidedly flat.  A late rally capped off with a courageous mark to Sam Bradford reduced the margin to less than a goal and the Rovers had a chance to win it late with a snap, but it went just wide, and the siren sounded to mark the Rovers second loss of the season.  A week of careful review this week to see just what went wrong. As Anthony Quon said, by far the team’s worst performance for the year and no doubt one the boys will want to put behind them.

The loss means the Rovers drop a spot to third position on the Premier C ladder and next up, travel to Central Reserve to take on Mazenod, no doubt keen to get back on the winners list.

Great to see another big attendance at the Home Game Luncheon, with 90 packing the Wright-Scarlett Pavilion for our caterers’ famous porterhouse steak and sides. Within the crowd was a big contingent of 1970s players, a table of visiting Old Mentonians’ and the ladies were out in force again. The next luncheon is on May 29 v Marcellin and then we’ve got reunions to celebrate the 1995 and 2001 premierships (view the schedule here).

In the early game, the Rovers recorded a big 116-point win over Old Mentonians, while at Castlefield Reserve, the Senior Women snuck in by a goal to remain undefeated and the Thirds went down to the just-demoted South Melbourne Districts. The Under 19’s recorded a good victory over Old Haileybury away from home. (click the links to view match reports or visit the respective team pages)