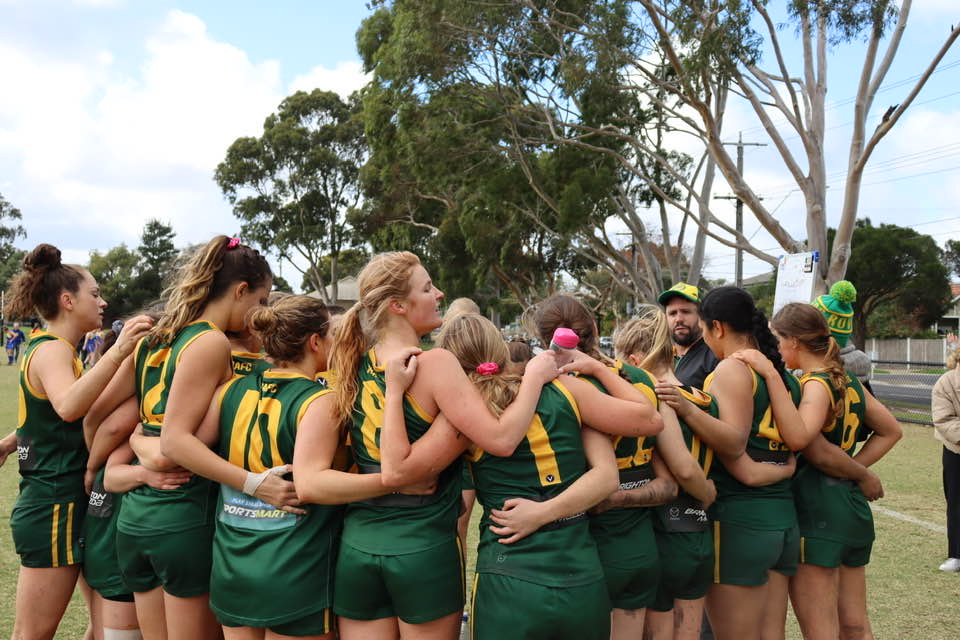 This week it was the undefeated Hampton Rovers Women up against 4th placed Bulleen Templestowe at Castlefield Reserve.

A good, hard game was anticipated but Corey knew the girls had trained solidly, prepared well and were ready for the contest.

We had the aid of the breeze in the first quarter however Bulleen got the first goal and were looking really dangerous. The Rovers responded, as we knew they would, when not long afterwards, Maegan Miller snapped a nice goal. Both teams fought out the quarter with the Rovers just edging in front by a solitary point.

Steph was in superb touch giving us great drive out of the centre and around the ground and Maxine was continuing on with her great form and getting heaps of the ball.

Meagan snagged another awesome goal not long into the second quarter. It was much needed as Bulleen were playing very well and were taking it right up to the Rovers. Bulleen got the last two goals of the second quarter and took a 3-point lead into half time.

The challenge was definitely on for the Rovers, but it was no time to panic.

We knew Corey would make sure of that during the half time break.

Some of the hard, tough work from Alba, Shae, Kristy, Bella and others in defence and around the ground would hopefully pay off for us in the second half.

Sally Walker, making her Senior Rovers Women’s debut was a treat to watch with her ball skills and long runs which helped set up scoring opportunities for the team. Mandy also was inspiring the team with her grit and determination and she ‘made the ball hers every time it came into our defence.

Unfortunately, our inspirational skipper, Bianca got injured in a ruck contest and had to come off the ground, hopefully not for the rest of the game. Greta had to step in to cover the ruck work. She is as brave as they come, and she did a great job until ‘B’ recovered and could return to the field.

Some nice teamwork started by Millie’s handball to ‘Lynchy’ and Max’s pickup and spin resulted in a great team goal slotted by the immensely talented Steph.

The Rovers had got their nose in front and weren’t about to give up the lead. They had lifted after having withstood the challenges that Bulleen had thrown at them so far. The last quarter was a dour contest with both teams slogging it out without a goal being scored.

The match ended with Hampton coming away with a much-deserved win by just 7 points! Every girl had contributed to a very gritty win against a strong and determined opposition.

Some wins you just have to grind out and it was our strong teamwork and efforts to help each other that really helped the Rovers to victory.