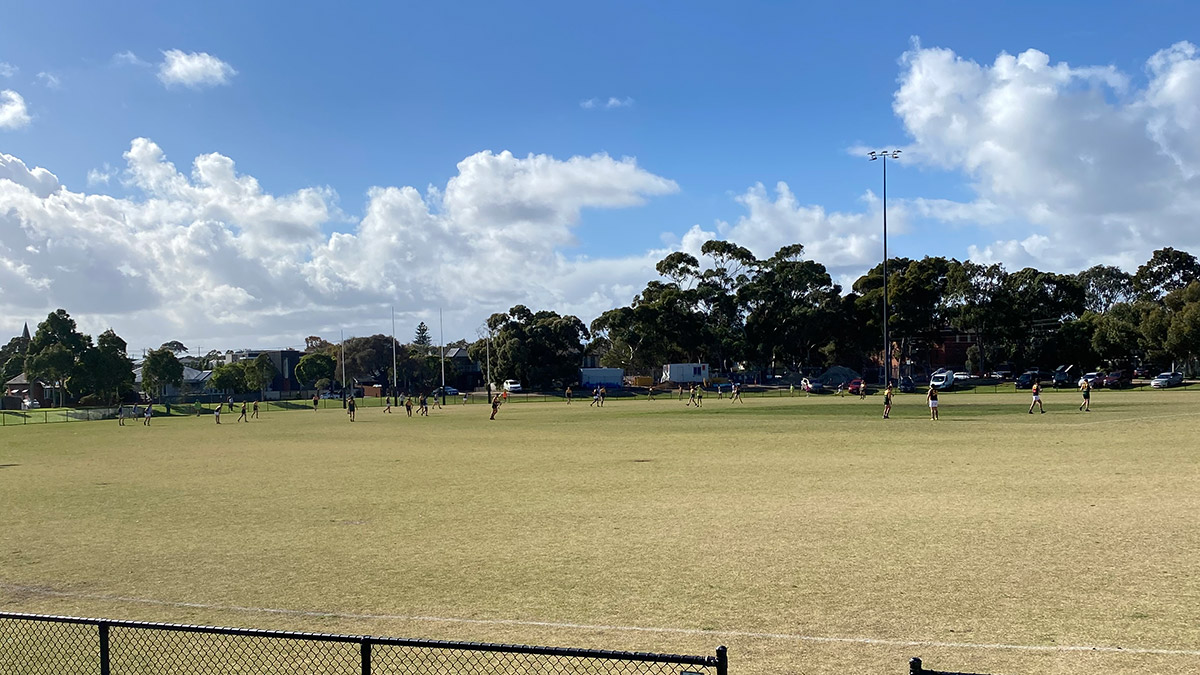 Judging by ladder positions it looked like a comfortable win for the Rovers was on the cards over Old Mentone. The Rovers had many changes to the team and some big names with senior experience added more confidence to the prediction.

And so the game begins with Old Mentone (OM) kicking with the aid of a 4 goal breeze to start the match. Rovers had it out the centre early but were unable to make good team work connection to bring it forward cleanly. OM didn’t bother with the finesse and with the aid of the breeze decided kicking it long was the trick and it worked well. They had the first 2 goals on the board with long direct kicks out of the backline to a very open forward line who were able to convert. Again and again the Rovers pushed it forward but the team work was not clicking under some good OM pressure. The Rovers eventually had a few shots on goal but the forwards weren’t really reading the play in the gusty conditions. Bottomley finally getting the Rovers on the board with a mark near the goal line. OM kicked their 3rd to extend their lead but Twigg getting the Rovers 2nd not long after to make it a 1 point game at quarter time. The Rovers actually had more of the ball but OM were very efficient in scoring. Deighton, Hodge, Woolston, Ellis, Jones and Speedy were playing well while I thought Dartnell in the ruck was excellent with his second efforts.

A few harsh words from the coach at the break implored the Rovers to lift their tackle rate and up the pressure. Kicking with the wind the Rovers then began to dominate. Early goals to Woolston, Bottomly and Speedy started things well. Pav decided to do an Eddie Betts special with a give and get handball and snapped a banana goal to send the spectators into a frenzy! (OK maybe an exaggeration – he was playing CHB and he looks nothing like Betts generally!)

Moving Oscar Roberts into the middle was a good move and he became a good link up player giving off to those in a better position and helped set up a couple of goals. Innes joined the party with a goal, Merlo added one, Jones goaled after a beautiful hit up from Hodge. Speedy added his second for the day. It was pretty much Rovers in control with 8 goals for the quarter to OM’s zero score.

To OM credit they actually fought back well. They had the wind and used it well to score 3 goals 4 behinds for the quarter. The Rovers were however much more efficient with the teamwork to get the ball deep and allow them to kick 6 straight goals for the quarter. Ballard scored a nice goal from an intercept, Speedy kicked a couple on the run, Botomley continued his good run with another. Dillon was playing well, continuing his good form.

Kicking with the wind in the last quarter, it officially became party time for the Rovers. The designated party boy was Speedy who added a few more (4) goals, Jones & Twigg both got their second,  Dartnell his first, Bottomley yet another.  The team also doing their best to get the ball to Jewell, but to be honest he muffed his 3 chances and they gave up on him then. (That’ll teach him for ragging the Goal Ump.)

A very good win as predicted.