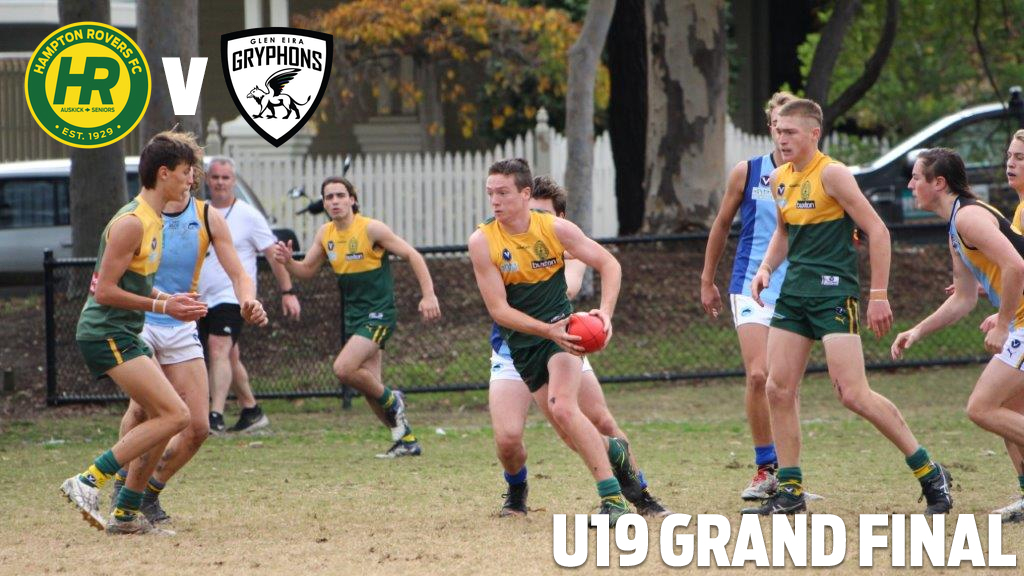 The final game for 2019, the Hampton Rovers’ 90th Year, will see our Under 19s take on Glen Eira/Old McKinnon in the Grand Final this Saturday.

Glen Eira have been the stand-out team in 2019, finishing the season as minor-premiers and defeating the Rovers by 34 points in the 2nd Semi Final two weeks ago. They also defeated the Rovers on both occasions during the regular season – by 28 points in round 6 and 43 points in round 13.

The Rovers played themselves back into form last Sunday with a 12-point win over South Melbourne Districts in the Preliminary Final to progress to the Grand Final.

Anything can happen in the season-decider and the Rovers will be looking to put together a four-quarter performance and play the best footy they’re capable of to take home the flag. Coach Sam Care has done a great job with the team this year and there is high anticipation ahead of the weekend.

Get along and show your support for the young Rovers as they go for premiership glory Saturday morning at Elsternwick Park! Entry is $15 for adults and $10 for concession/seniors, however you can pre-purchase tickets online to save $3 – purchase tickets here. For those unable to make it, live scores will be available via the website and updates on Rovers Twitter.

We also invite everyone to the club tonight for the final Senior Selection Night of the year. Bar open from 6pm, dinner available from 7pm, hear the Grand Final team & we’ll have the Ashes on TV from 7:30pm. Also, it’s your final chance to book in for Friday’s Domino Luncheon @ the Boss!