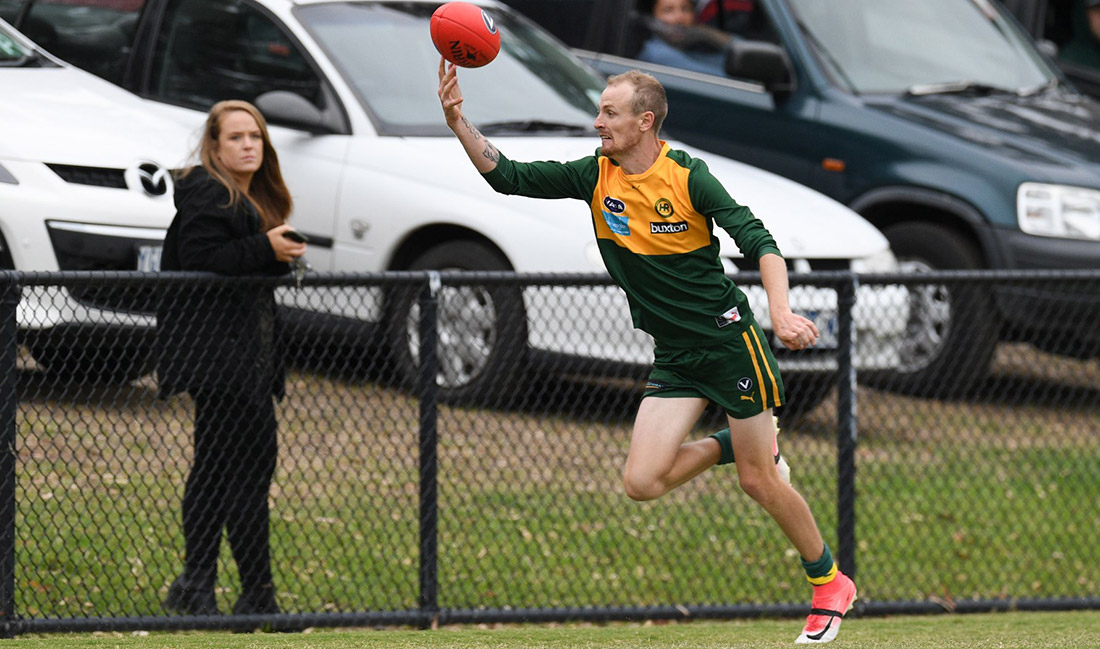 A big second half, spearheaded by nine goals to Sam Bradford, has seen the Rovers run out 41-point victors over Ajax at Boss James Reserve.

In stunning conditions at the Boss for the triple-header, the U19s lost their first game of the season, but both the Reserves and Seniors recorded big wins against rivals Ajax.

It wasn’t exactly smooth sailing in the first quarter.  The first couple of Hampton goals were via some classy work from Rich Atkins and Nick Murnane, but otherwise it was lacklustre.  Cam Hetherington has his hands full at full back marking the key Ajax forward and with the sharp ball movement by the Ajax mids, he was getting plenty of supply.  Traegs was working hard and the difference at the break would have been greater but for his great effort in the dying seconds where he won the two on one contest.  Broadley was going well in the ruck and while our midfielders weren’t capitalising on the advantage, Ajax did little damage.

The second term started in similar fashion by Ajax when the first kick, a 60m torp hit the post. From there it was an arm wrestle. Daniel Corp was in fine form, marking well and bringing a number of his teammates into the game as well as kicking a couple of goals himself.  Sam Bradford kicked his first and a few minutes later was on the end of a coast to coast for an easy goal.  The momentum was changing, and as the quarter progressed, the opposition were wilting.

Ryan Fogarty was his usual hard at the ball, Harry Hodges was in and under every pack as well as attempting the occasional screamer and Cam Hetherington down back had worked out his opponent and wasn’t giving him a sniff.  The high spot of the quarter was the remarkable kick off the ground from the pocket by Ant Folino which split the middle and increased the half time margin to 10 points.

At the break, coach Anthony Quon was happy about the composure under pressure and the way in the second half of the quarter the pressure his chargers put on the Ajax players led to their error rate increasing.

In the third quarter, a couple of the new players in the side came to the fore, Doug Ballard off half back was gaining confidence and Callum Tate was using his strength to great effect against the Ajax midfielders and picking up some handy clearances. Corpy took a fine mark straight in front for the goal, gave a goal off to Shem Curry in the square and was on the end of a long bomb from Bradford for a goal.

Hampton were running hot and Ajax had no answer.  At half time, coach Quon called James Prosser the Rovers’ litmus paper – when he was firing, the team was firing.  He lifted in the third with some deft touches and clever kicks to give those up the ground more of a chance.  Five goals up at the final break and the Rovers looked like they were home.

When Sam Bradford kicked his fourth in the first minute of the final term, followed by a great run and chase by Prosser for another goal a minute later, the Rovers were home.  Josh Broadley was dominating the hitouts, Joel Melnjak, as he had been all day, was doing a fine job whether down back or filling in in the ruck and Scott Ebbott was coming into the game.

Then, at the 12 minute mark, Ajax came alive.. in two minutes, they kicked three goals and the Rovers faithful were tense but only for a couple of minutes, as the Bradford show was about to start.  He kicked another four majors in the final stages of the quarter with varying combinations of marks, evasive moves, speed and some good delivery.  He finished with five for the quarter and nine for the day.  At the after game, the coach split best on ground honours between Corp and Bradford, both had their best games for the season to date.

After a slow start to the 2019 season, the Rovers have now won their past three matches to square the ledger at 3-3 and sit one game outside of the top four. Next up, the Rovers face Old Ivanhoe away at Chelsworth Park.

The Under 19s lost to Glen Eira in their first loss of the season, but remain equal-second on the ladder. Read the full match report.

Another great win to the Senior Women playing away against Emmaus St Leos.  Good to see a range of goal kickers, probably more on Saturday in one game than we’ve ever had.  A four-quarter performance from the back six who kept the Emmaus women out of the game and it was just luck that let them in for that lone score in the last quarter.

The Rovers’ best were Kristy Ebbott, who picked up the BOG award at the after game, Max Benkhe for a four quarter performance, Taylan Merrick, Hannah Bahn and Grace Atta.  Amazing that the multiple goal scorer didn’t get a vote!

The Thirds took the points after their opponent forfeited on Thursday evening, saving the boys a road trip to North Brunswick, although the team was keen to play and earn some much-needed percentage. After six rounds, the Rovers sit fifth on the ladder.