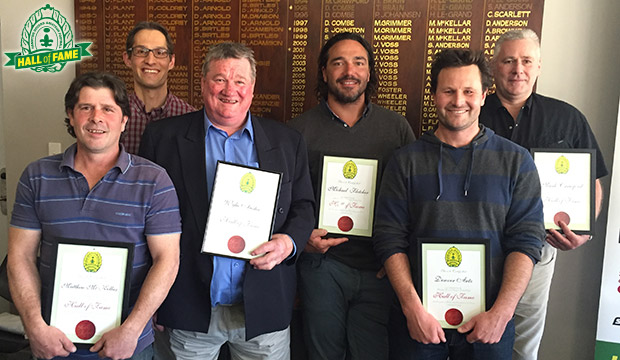 A further seven club legends were inducted into the Hampton Rovers Hall of Fame on Saturday, bringing the total number of inductees to 27.

The Hampton Rovers AFC Hall of Fame recognises players and/or coaches who have excelled both on and off the field. The Hall of Fame was established in 2004 where at the club’s 75th Anniversary Gala Dinner, held at the Brighton International on July 17, thirteen men were inducted, with all eight living inductees in attendance. In 2016, 14 club legends have been inducted to make up for the fact there have been no additions since the first in 2004. These have occurred at three special home game luncheons.

The first luncheon in May saw Merv Davidson, Anthony Naumoff, David Combe and Gary Nash as the first four inducted into the Hall of Fame since 2004.

At the second luncheon, Barry Bird, Darren McConville and Chris Rowston were the next three to be bestowed the honour of Hall of Fame induction.

The final luncheon was held last Saturday and the Wright-Scarlett Pavilion was at capacity with over 120 people seated for lunch plus others who were unable to get a seat. Some absolute stars of the club from the late 1990s and 2000s were amongst those inducted.

Denver Artz, Anthony Browne, Mark Crawford, Michael Fletcher and Matthew McKellar were champions from the three-premiership era for the club and were all inducted as Hall of Fame’ers. Multiple Premierships, Best & Fairest’s and Big V appearances are amongst this fine group of players.

Also given the honour was Wiley Austin who played in the 1980’s and was the heart and soul of the club during some lean years.

And last but not least, Graham Cooper entered the Hampton Rovers Hall of Fame under the Meritorious Achievement category, joining Brownlow Medallist Ross Smith. Graham played footy with the Rovers at U19 level before being recruited by Hawthorn Football Club where he played in the club’s first premiership and a total of 90 VFL games.

Graham was unable to be in attendance on Saturday due to health reasons, but a pre-recorded video was played – view the video here.

The other six were in attendance and all reflected on their time at the club. It really was one of the best luncheons held at Boss James Reserve in recent times, and many of the newly inducted Hall of Fame members and past players celebrated into the night.

VIEW DETAILS OF ALL HALL OF FAME MEMBERS HERE >

The club congratulates the 14 newly inducted Hall of Fame members, and thanks the sub-committee who’ve worked tirelessly on this and everyone who has supported the luncheons throughout the year. While it’s been a long time between inductions since the Hall of Fame was established in 2004, the club assures it won’t be as long as that until the next group of club legends are inducted.