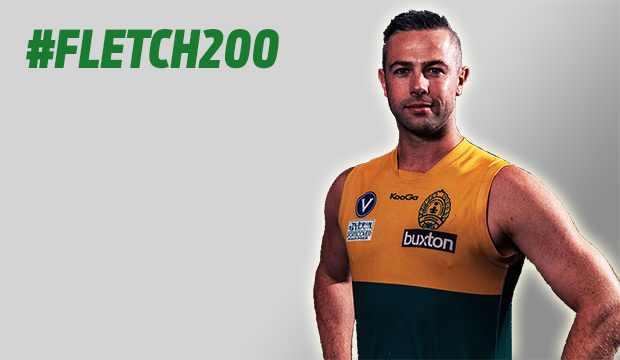 Hampton Rovers captain Leigh Fletcher plays his 200th VAFA game for the club this Saturday as the Rovers host Ajax at Boss James Reserve. It’s also the third and final Hall of Fame Luncheon and we invite everyone along.

It promises to be a big day at the Boss and it’ll all get underway with one of our biggest luncheons of the year as we induct our final round of legends into the Hall of Fame for 2016, with a particular focus on players from the modern era.

We’ll also celebrate the 200 VAFA games milestone for Leigh Fletcher. Fletch first played for the Rovers in 2000, playing 25 junior games before playing several years at the Sandringham Zebras and returning full-time to the club in 2007. He is a two-time premiership player (2013 & 2014) and five-time best & fairest (2009-2013).

He has also won the league best & fairest on two occasions (2010 Premier B & 2013 Division 1) and has represented the Big V on four occasions, captaining the B-D4 rep side in 2014. Leigh is known for his pace and high tempo footy and has continued his good form in 2016, playing all 12 games to-date. A leader on and off the field, Fletch has remained loyal to the Rovers and will go down as an all-time great.

Early bookings have been strong and we look like having one of the largest attendances on the season. Bookings are essential so please get in quick to reserve your spot. The luncheon gets underway at 12 midday, until the commencement of the senior game at 2pm. The cost is just $30 per head for a quality main meal with drinks available at bar prices.

Reserve your spot online (click here) or contact Gary Nash (0407 313 054), payment is made on the day with eftpos facilities available at the club. Don’t forget club membership entitles you to lunch (bookings are still required however). BOOK NOW!

The club welcomes everyone to get along to celebrate the induction of our latest Hall of Fame members and indeed every one of them inducted in 2016, as well as the 200 game milestone for Fletch.