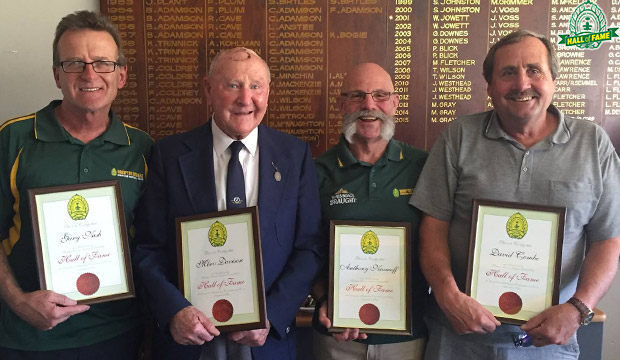 Saturday was the first of three Hall of Fame luncheons this year to induct 14 club legends for the first time since the Hampton Rovers AFC Hall of Fame was established in 2004.

It was a great occasion with the four new inductees interviewed by Don and reflecting on their time at the club.

The remaining two Hall of Fame luncheons will be held on Saturday 4th June (round 9 v Old Scotch) and Saturday 16th July (round 13 v Ajax). We encourage everyone to get along to those two events and celebrate the rich history of our great club.

Details of the four inducted on Saturday:

ANTHONY NAUMOFF
Played a total of 168 VAFA games for the Hampton Rovers. He was a senior running for many years, coached the reserves for 7 years, under 19s for 3 years as well as the under 17s and under 16s. Tony was awarded the VAFA Certificate of Merit in 2006 and has been club secretary since 2013.

DAVID COMBE
Played 192 VAFA games for the club, won the VAFA D section goal kicking in 1975. David won the Reserves best & fairest in 1972 and was Senior President in the premiership year of 1995, until 1997.

GARY NASH
Played 193 VAFA games for the Rovers and won the senior best & fairest in 1977 and the under 19s best & fairest in 1972. He was senior captain for three years – from 1978 until 1972. Nashy was both senior and reserves coach in 1986. He is a member of the senior executive and a member of the club’s board. Has won the best clubman award and continues to be a tireless worker around the club.