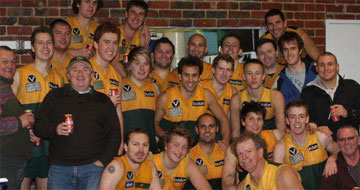 The club is pleased to announce the Thirds team will return in 2013 following a one year hiatus. A surge of new and returning players has meant the club once again has the numbers to field a fourth senior team. Meanwhile, the Thirds & U19 fixture has been released.

The Hampton Rovers Thirds side will compete in the VAFA Club XVIII (2) competition which includes local rivals Ormond. The club originally had a clubbies for one year in 2002 before it returned in 2009 for three seasons to cater for increased playing numbers.

Under a new president and senior coach in 2013, it really is a new era and new beginning for the Rovers in 2013 and the excitement levels are rising with a huge influx in playing numbers.

For the team to be a success however, we require more players and officials. The club will this week lock-in a coach however this is still vacant and anyone interested should contact us for details. Were also on the look-out for people to assist the team in various roles including team manager, field umpire, goal umpire, trainer, water carriers, etc.

The Hampton Rovers Third XVIII is ideal for players working their way into open-age football, those unable to fully commit to training during the week as well as players who may feel theyre unable to keep up with the pace of the Seniors and Reserves!

We welcome all prospective players and helpers to get along to training, Tuesday or Thursday from 6pm at Boss James Reserve. Alternatively, please contact the club for more information. Players will need to register with the VAFA in order to play in the side. Those who dont require a clearance can re-register online by clicking here. Clearance forms are available at training for anyone coming from another club.

The 2013 season commences this Saturday with the Thirds taking on Whitefriars away at Whitefriars College in Donvale. Away games dominate the opening nine games of the season with just three at home, however the 15-round season concludes with four of the last six at home. VIEW FULL FIXTURE >

The VAFA Under 19 South fixture was also released on Monday with the Hampton Rovers under new coach John Cesario opening their season away at Peninsula Old Boys before returning home to take on Ormond followed by Parkdale Vultures. Its a local competition with the likes of Beaumaris, Oakleigh and St Bedes Mentone also in the division. There are still a few spots for more U19 players  if you would like to play in 2013, please contact John or come along to training Monday/Thursday 6pm at Boss James Reserve. VIEW FULL FIXTURE >