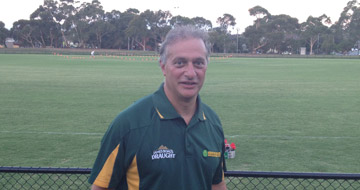 The Hampton Rovers Football Club is delighted to announce the appointment of John Cesario as Under 19 coach for the 2013 season. John has a long history at the Rovers and is sure to be an asset as we look towards an exciting year for the club.

Following Jay Watts recent resignation due to work commitments, the club immediately commenced the process of finding a replacement and was pleased to announce Johns appointment soon after applications closed.

John is a level 2 accredited coach, long-time junior coach at the Rovers and more recently senior coach at Emmaus St Leos (2010-11) and Elsternwick (2012) in the VAFA.

Johns involvement at Hampton Rovers commences as Auskick coordinator in 1999. Between then and 2008 he coached seven junior sides which included an U16 premiership in 2007. He was also U19 assistant coach in 2003 and senior assistant coach in B grade in 2009. John has also Junior President for two years and was a main driver behind the clubrooms redevelopment.

The club is obviously thrilled to have someone of Johns experience and passion for the Rovers back involved in 2013. We now call on all Under 19 players to get along to training as we prepare for what promises to be an exciting season. Following a lean year on-field in 2012, the improvement of the younger players, experience gained from playing up an age group last year, and a number of players moving up from the juniors, this year looks like being a much improved one.

Training continues each Tuesday & Thursday 6pm at Boss James Reserve  see the pre-season page for full details. All players are encouraged to get along and train with the seniors and the 2013 season fast approaches.

The club plays its first of three practice games this Saturday against Peninsula Old Boys at Mornington.