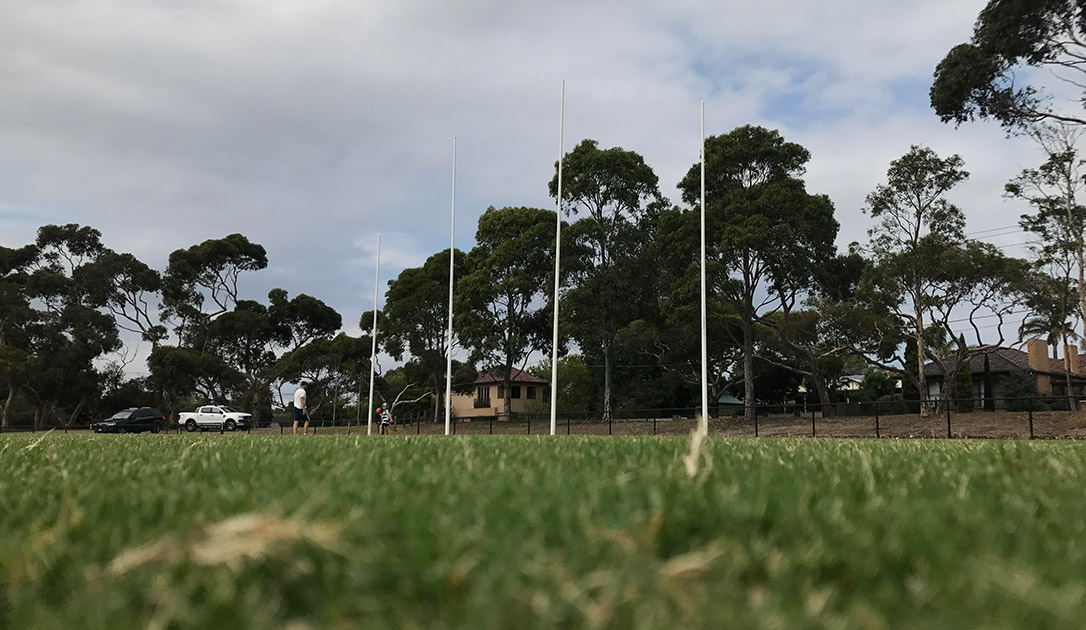 The Rovers Under 19s took on Beaumaris at Boss James Reserve on Saturday – opposition who are one of the better performed teams in Division 1 this season.

The Rovers had been soundly defeated on both previous occasions when the teams have met this season. Conditions on this day were sunny and dry but windy.

The Rovers won the toss and captains Lucas and Smogs elected to kick with the assistance of the wind towards the David Street end.

However, it was the Sharks who grabbed the ascendancy for the first 10 minutes of the game, even though they were kicking against the breeze, scoring 2 early goals with accurate passing into their forward 50. Ben Corrigan and Brodie O’Neill started well for the Rovers with their attack on the ball.

It was Alex Barton who set up our first goal with an intercept and pass to Charles who kicked truly. Alex then got involved again with a pass to Dan Hall who got the ball to Charles for another shot at goal but this one was a behind.

Dan then scored another behind from the pocket with a blind turn that left his opponent confounded and deserved a major. Charles followed up with a strong one-on-one in which he was slung whilst kicking for goal, the ball unfortunately hitting the post.

The Rovers had much of the play for the latter part of the quarter but scored 6 behinds, not making the most of the breeze. But then James Bull got his toe to the ball when it was bubbling around in our goal square late in the quarter for the Rovers’ second goal for the term.

The Sharks didn’t add to their 2 early goals and it was clear that the Rovers were up for the challenge in this game. Qtr time scores: Rovers 2-6, Sharks 2-0

The Sharks were kicking with the wind in the second term but the Rovers applied pressure to the opposition all over the ground, our tackling being a feature. Sharpy got involved and passed on his wrong side to Will C who took an overhead grab but scored a behind.

The Rovers than locked the ball in our forward half and with a passage of accurate passes into the breeze through Sharpy to Bully to Will who was infringed whilst trying to mark, and scored a goal from the free.

Both Hugo S and Hugo G came into the game and were excellent this quarter.

The Sharks just couldn’t get the ball forward, and all the play was in the Rovers’ half with 5 scoring shots to 1. In a great team effort, the Rovers held the Sharks to a solitary behind for the quarter. Half time scores HR 3-10, Sharks 2-1.

The Rovers continued to apply the pressure in the third quarter, and the screws were tightened on the opposition. Alex and Cam Carmeni were well on top in defence, repelling anything that came their way and giving great drive out of the back half.

Tom E was doing well against his opponent in the ruck contests and set up the first goal for the quarter by tapping the ball to Lachlan Roberts who scored. We then won the next centre clearance, Beames surged from the middle and kicked to Charles who marked and goaled.

Another centre clearance and the ball was delivered to Will who kicked on the turn but for a minor score. The Rovers were on the march.

Hugo G was marking everything at half back, and for the second quarter in succession, the Sharks couldn’t score a major. Our third goal came when Tom made the effort to get to a ruck contest at centre half forward, palmed the ball straight on to Sharpy’s chest and a goal resulted. Another excellent quarter from the Rovers and the Sharks had no answers. 3 qtr time scores: Rovers 6-13, Sharks 2-2

The Sharks came alive early in the final qtr and for the first 10 minutes or so they utilised the breeze going their way and peppered the goals. Fortunately, only behinds resulted.

Dan then broke the opposition resistance by snapping a classic opportunist’s goal against the run of play when the ball came out the back of a contest in our forward line. From there it became a bit of an arm wrestle, and although the Sharks scored a late goal, the Rovers had effectively snuffed out any thoughts of Beauie getting back into the game.

A couple of nice long runs along the far boundary from our backline by Cam without the opposition paying him much attention suggested that their focus had wavered and they were thinking of other things. It was a top performance against a very good team and demonstrated what can be achieved with 100% buy-in across the whole group. Final scores: Rovers 7-13, Sharks 3-8

Thanks to Greg Lay for the match report.