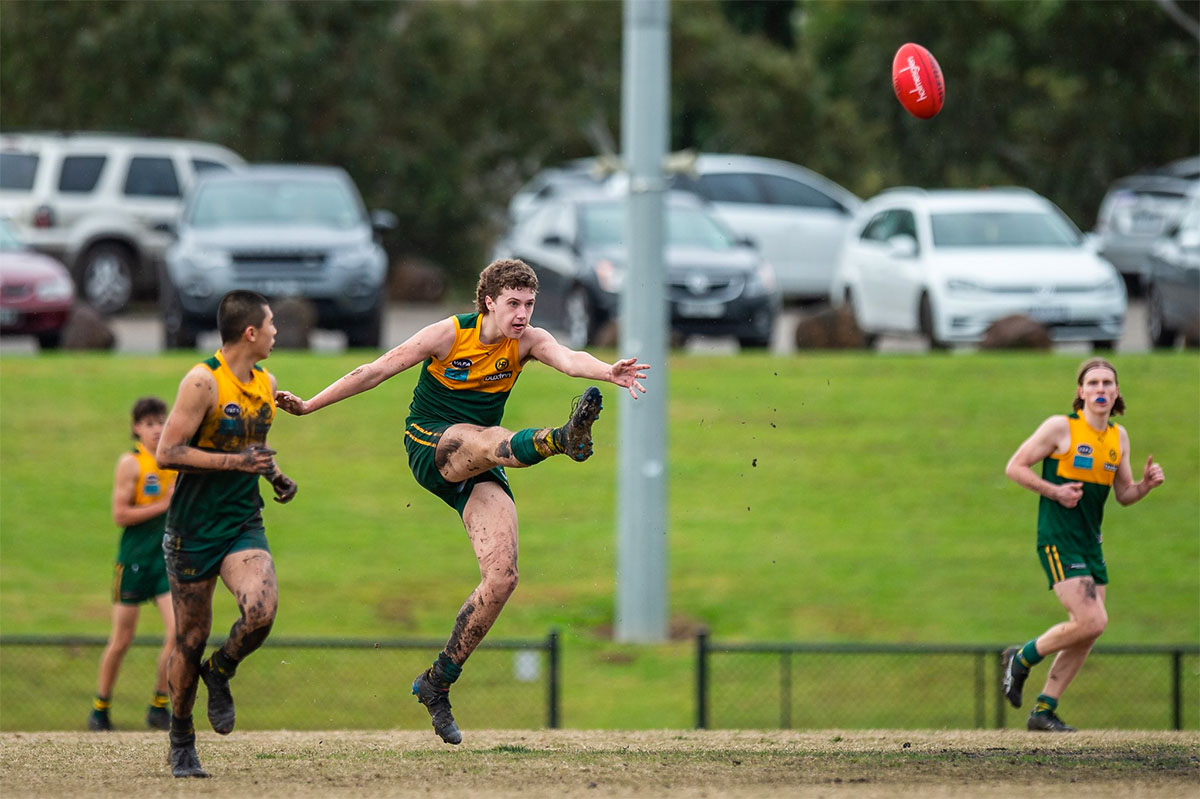 The Rovers U19s took on Old Haileybury at Elsternwick Park on Sunday as part of the VAFA U19 Division 1 Footy Festival.

Unfortunately, the weather was not great for the early part of the match – cold and drizzly for much of the time, but the Elsternwick Park Oval no. 1 was in good nick.

No breeze to speak of so no real advantage kicking to either end.

A few players were late withdrawals but the team still managed to have 24 available for the day, including some of the school age boys who are relieved of school footy duties during the holidays.

We got off to a good start with plenty of the play early and the first goal of the match to Dan Hall who crumbed the slippery ball cleanly and kicked truly.

Players on both sides were having trouble adjusting to the greasy conditions and hence many handballs and kicks were not finding their mark, and in particular plenty of ill-directed kicks into our forward line.

Ben Crothers and Luis Coughlin were handling the conditions well and giving very good drive, and our second goal eventually came from the boot of Oli Fyfe.

Will C then took a nice grab and passed to Will K who goaled.

Sharpy earned a free followed by a 50/25 metre(?) penalty and a pass to Hugo L in the pocket who snapped our 4th for the term.

The penalty was one of many against the Old Haileyburians and which in the end cost them dearly.

Mika kicked for goal from around the 50 metre arc and he went very hard very early with his goal celebration but it was a case of premature elation as the ball was touched in the goal square.

Meantime OH scored 4 behinds but could have easily had a couple of majors.

The drizzle eased off and conditions became more favourable in the second term.

Big Tom Ellinghaus started dominating the ruck contests and giving good service to the likes of Kento who in turn gave the Rovers great drive from the stoppages.

Ben Antonius took a strong mark around centre half forward and spotted up Dan who kicked his second.

Alex Barton and Cam Carmeni were solid in defence and OH were struggling to score.

Will C took a strong overhead mark and kicked truly from around 50.

The Rovers’ tackling pressure had ramped up and a strong tackle by Caggs was rewarded with a free and a goal.

OH managed 2 goals for the term but the Rovers went into the main break with a 5 goal lead.

The third qtr was a bit lifeless with a total of 4 goals scored (2 to each side) and not a lot of talk or spark in the Rovers’ camp.

Our disposal into the forward line continued to be an issue even though the conditions had improved.

Caggs continued his good form with a good tackle resulting in another free, another 50 m penalty and a kick to Oli who goaled.

Another crumbing goal to Dan from a quick kick by Caggs but otherwise not too many highlights in this term.

Mika had another set shot at goal but unfortunately his kick was off target and the celebrations were put on ice again.

The Rovers had maintained their 5 goal lead.

OH started the term well and scored a couple of majors early.

But the Rovers then got the game on their own terms, although again we had trouble hitting the score board despite having much of the play.

Will C eventually scored with his second goal for the game, we then won the centre clearance and Oli’s pass to Will C brought another goal.

Then it all turned a bit messy for the opposition with their players taking out their frustrations on the umpires, resulting in a red card send-off and report for umpire abuse, back-to-back 50 m penalties and a goal to Tom from the square.

Tom then capped off a fine quarter with another goal after roving the ball from a throw-in, the team came to life (at long last) and got around the big fella, he was clearly enjoying himself by this time and rightly so.

In the end, it was a comfortable win, but it should be noted that around 5 of our goals for the game came from 50m penalties.

View Photos from the game here >