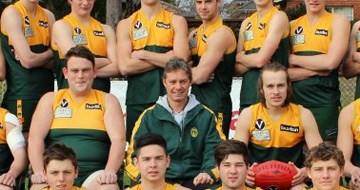 On the eve of what is shaping up to be one of the most exciting seasons in the history of the Hampton Rovers, it is with deep regret that the Hampton Rovers have to announce the resignation of Under 19 Coach, Jay Watts.

Jay has been a valuable asset since joining the Club and taking the reins of the Under 19s at the start of the 2012 season. He led the group of players through a tough 2012, with improvement evident as the season progressed. His ability to connect with the young and exciting playing group, combined with his experience and drive to improve means that there will be a big void to fill.

Jay has had to stand down due to employment reasons, with his employer recently going through a company restructure. He will now take on a role as Regional Manager, requiring him to travel both within Victoria and interstate, severely compromising his ability to dedicate the time required to coach.

I am really upset to have to have to make this decision, as there is a genuine buzz in the air about the upcoming season. Jay said on his resignation.

Its amazing, the whole football community are talking about the Hampton Rovers, and I think the Club is on the eve of something really special.

Jay has confirmed that he will be in attendance at games and social functions when his schedule permits throughout the season, and will remain a supporter of the Club.

The Hampton Rovers would like to wish Jay all the best in this new employment role, and look forward to continuing to see him around the Club in 2013 and beyond.