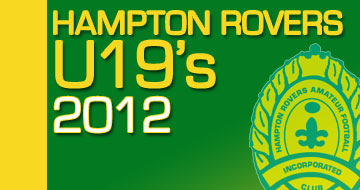 The 2012 VAFA season commences in under two weeks time and the Hampton Rovers are looking for additional Under 19 players to bolster our team under new coach Jay Watts.

With several of last years U17 players having school and Sandringham Dragons commitments and also the natural progression of last years U19 players moving up to Seniors/Reserves, the team has been left light-on however the Hampton Rovers are committed to putting an U19 team on the field in 2012.

Jay Watts is the new coach of the Hampton Rovers Under 19s in 2012. Jay has had a wealth of coaching experience, both at East Sandringham and Sandringham Dragons and is looking forward to fostering and promoting enjoyment of the game for all U19 players in 2012, improving their skills, and developing players for senior football. Read more about Jays appointment here.

Home games will be held at the newly resurfaced Boss James Reserve which will be the best footy ground in Bayside. The U19s will compete in VAFA U19 South division against the likes of Beaumaris, St Bedes Mentone, De La Salle and Parkdale Vultures.

The 2012 fixture has now been released with the Rovers taking on Beaumaris in Round 1 at Banksia Reserve at 11:40am. The Rovers will play their opening three games away from home due to the resurfacing of Boss James Reserve with the first home game part of a huge triple-header to open the redeveloped ground. In 2012, the Rovers U19s will play six 2pm games, four 11:40am games and eight 9:20am games with all games on Saturday’s.

Training is currently being held at Castefield Reserve (Ludstone St), on Tuesday & Thursday evenings commencing at 6pm. Once Boss James Reserve re-opens, training will be held at our main home ground.