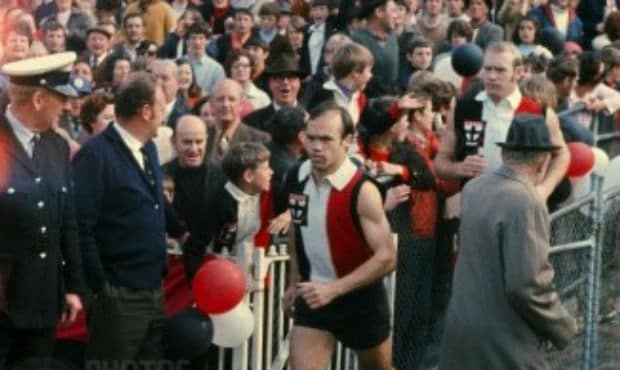 Ross Smith is arguably Hampton Rovers AFC’s most well-known and decorated player. Smith played for the Rovers until 1960 before moving to St.Kilda in the VFL in 1961. In 1960, Smith was captain of the Hampton Rovers Under 19’s and won the best & fairest.

Smith’s career proved the value of persisting. Smith took several years to blossom as a rover although his courage and determination were never in doubt. He didn’t make the Saints’ senior list at first but after a great game for the seconds he won promotion for the second round.

It wasn’t until the preliminary final of 1966 that his career kicked into a higher gear. He starred in the Saints’ win and was part of the flag side a week later. In 1967 he consistently turned in tireless roving displays and was a prolific kickwinner. He earned his first Victorian guernsey and then bolted away to win the Brownlow with 24 votes. His improvement was illustrated by the fact that in six previous seasons he had scored only six votes.

Smith won his second club championship in 1971 and was tipped to win a second Brownlow. He played in the 1971 runner-up team that year. He captained the Victorian side at the 1972 carnival and led the Saints from 1970 to 1972. Smith played a total of 234 games for the Saints and kicked 231 goals.

He then went to WA as coach of Subiaco for three years and coached the club to a flag. He returned to St Kilda as assistant coach and was talked out of retirement when the club suffered injuries. He coached the Saints for a year in 1977.