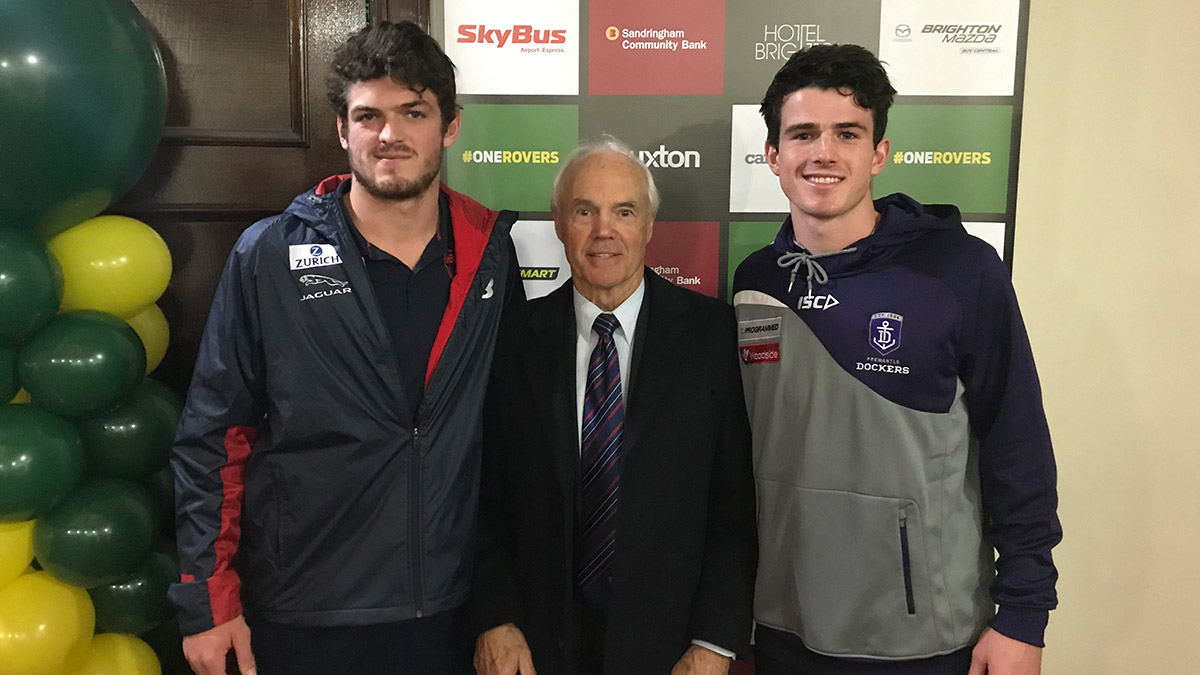 The event was quick to sell-out, with 220 people jam-packed into the venue, and it was great to see so many familiar faces there – from past players over various eras to current players, officials and junior parents. It was certainly the biggest joint-junior-senior function held in some time, proving how healthy the club is at present.

It was an honour to have the club’s sole Brownlow Medallist as a guest speaker on the night. Ross Smith talked about his younger days at the club – playing as a 14-year-old in the Under 19s, before moving to St Kilda, winning a premiership and the 1961 Brownlow. Ross is a humble man and has so much respect for the Hampton Rovers and it’s always a pleasure to have him in attendance at a club event or game.

Two of our present AFL players also spoke, with brothers Angus and Andrew Brayshaw fronting up after playing against each other earlier in the day at the MCG. Ronnie Verma fired the questions and the boys recalled a few moments from their many years at the Rovers, which to this day remain as some of their best moments in their footy careers.

The U15 Grand final when Ash Roberts team took down a team that was undefeated for three years was one moment Andrew said remains as his favourite football moment. Andrew also said he loved seeing his team go back-to-back and mentioned Oscar Roberts’ heroics kicking the match winner as another highlight in nine years at Rovers. He mentioned the love and mateship he shared and that he still communicates with the boys today and said his fun days at Rovers are different to his professional sportsman attitude he needs at present. Angus likewise mentioned the U16 Grand Final in 2011 under Ron Verma as coach.

Local band Mid Life Crisis then put on a great show, playing some sensational hits, with the dancefloor lighting up.

It was a successful evening for the club, raising plenty of funds, and we thank those who donated their time to make it a reality, led by Steve Anderson, and to those who supported the night be attending, as well as donating/buying auction items.

It’s clear we could have had well over 220 in attendance and it was simply too late to move to another venue – however that’s a good problem to have for the club! Now we begin the countdown to the big 100-year anniversary and a much larger venue awaits!

Support the Rovers by becoming a 2019 Club Member or donating to the club via the Australian Sports Foundation.