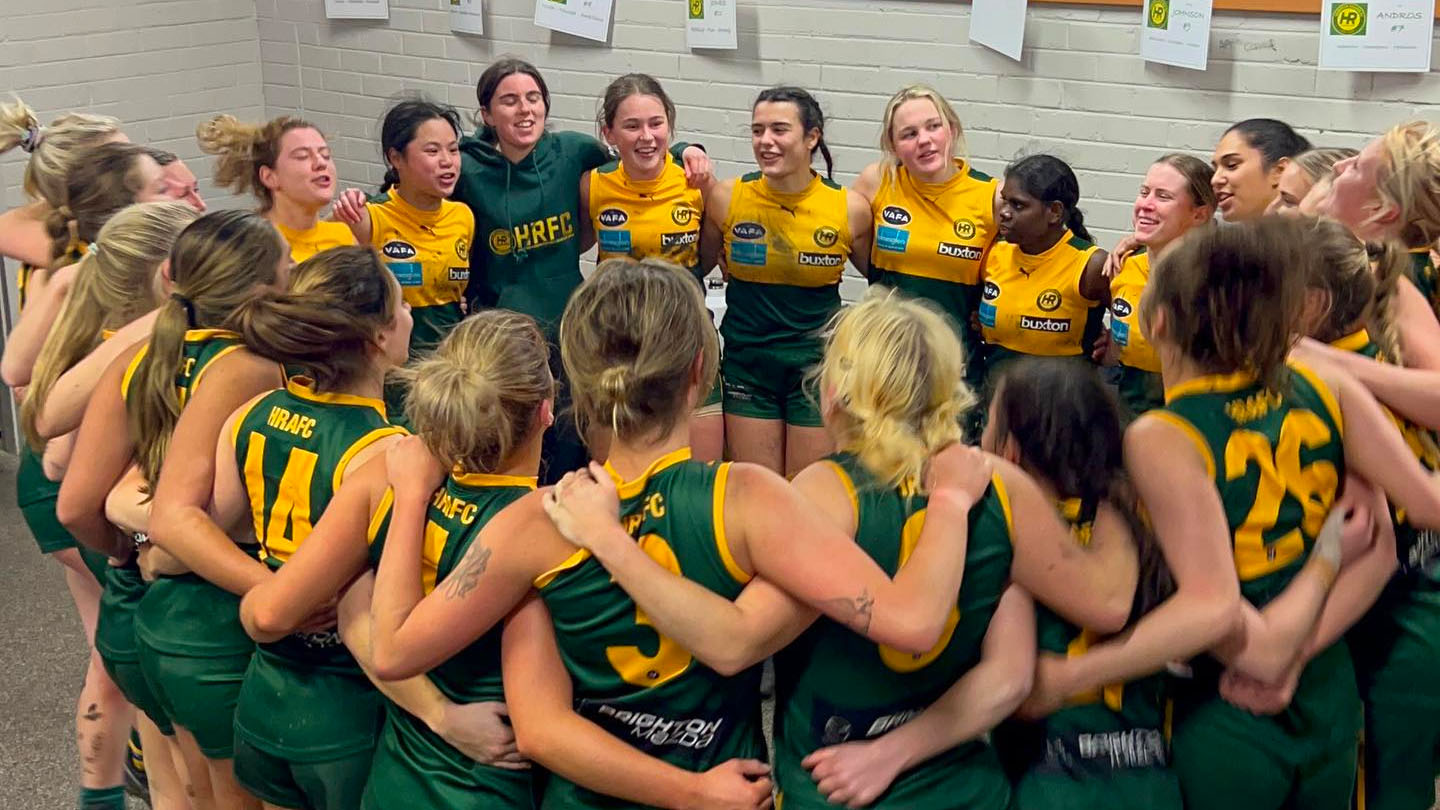 The Hampton Rovers Senior Women hosted Albert Park in the Semi Final at Boss James Reserve on Saturday and what a start to the day it was, with the Rovers Auskickers forming a guard of honour to cheer the team onto the ground for big game!

Led out by the co-captains Mandy Naylor and Hayley Gould, this sensational bunch of Rovers women, their coaches and support group have all worked extremely hard to make the finals…and just as importantly they have had great fun along the way!

There has been a number of milestones this year for the players and in this game, Kristy Ebbott surpassed her 50th Senior Club game. Kristy has always played with passion, determination and a strong commitment to do her best for the team. Well done to Kristy.

The game got underway with Albert Park having the advantage of the breeze and the play was rebounding back and forth for some considerable part of the first quarter.  Albert Park has a very strong and skillful side but the Rovers seemed to have their measure and ‘then some’ as they took control but just couldn’t hit the scoreboard.

The intensity was certainly up a notch or two as both sides showed great desperation in the contests.  Early on Haley had helped set the tone for the Rovers with her strong attack on the footy.  Jas was cutting up the opposition with her great runs and EmJ seemed to be everywhere and was causing headaches for Albert Park. There was very good signs for the Rovers such as the string of play from Casey to Maegan to Jess down the flank with brought due applause from the big crowd!

Albert Park were able to move the ball forward against the flow of the game so far and capitalize with a goal, the first of score of the match. Not long after we got on the board with a point to Steph who only just missed a snap after brilliant teamwork from Tash and Tayla. Certainly there was good signs with the way the Rovers were playing but they were going to have to be patient and continue to play hard and smart footy.

After a ‘Wardy rev up’ at quarter time, although behind on the scoreboard,  the Rovers were positive and ready to take it up to Albert Park.  Shae came streaming through a couple of times from defence and was showing the way while Mandy and Max were brilliant down back, combining their aggression, skills and team play to perfection.

Their efforts were infectious and all around the ground the Rovers were lifting. They were ‘peppering’ the goals and we had four ‘near misses’!  Greta took a nice mark, played on and kicked truly for our first goal, giving us the lead for the first time in the match, just before half time! With the wind picking up and becoming quite strong, this quarter was going to be a real test for the Rovers women. Were the girls up to it, could they hold off a strong, hard and physical Albert Park team? Of course they could!!

Tayla was leading the way with her grit and determination, let alone her running efforts and sublime skills. Bella was playing good hard footy and   bringing others into the game. Jas and Jess were continuing to dominate and the teamwork, such as Kristy’s efforts to flick the ball out from packs, had  really lifted. Tash’s handball and follow up sheperd to get the ball to Tayla was absolutely brilliant!   Steph got a great goal to cap off the hard work of the Rovers around the ground. Albert Park got a late goal after a nice pack mark and straight kick to take back the lead going into the last quarter.

At the three-quarter time break, Wardy asked the girls to all dig deep and use ‘gut determination’ in the last quarter, to get them into the Grand Final spot they had all worked so hard towards. Then Hayley had the team huddle together just prior to start of the last, to implore one and all to show this opposition who’s the ‘Boss of the Boss’!!

Once the quarter got underway it was clear to all the Rovers supporters that the Rovers Women’s team wasn’t going to let this one slip. It was Kera that showed the way as she lifted to the occasion and was simply brilliant in the last quarter. Firstly a behind to Jess, then Tayla, Maegan and then Alana after a great mark. If they were going to do it point by point then so be it. Then the brilliant Steph stepped in and sealed it with her second goal for the game!

The Hampton Rovers and Albert Park Women had both played a great game of finals footy but the Rovers were over the line at this stage and into a Grand Final. One more challenge now awaits them in two weeks’ time.

Update: With Albert Park defeating Oakleigh in the Preliminary Final, the Rovers will take on the Falcons in the Grand Final on Sunday, August 14 at Trevor Barker Oval in Sandringham, starting at 11:45am.