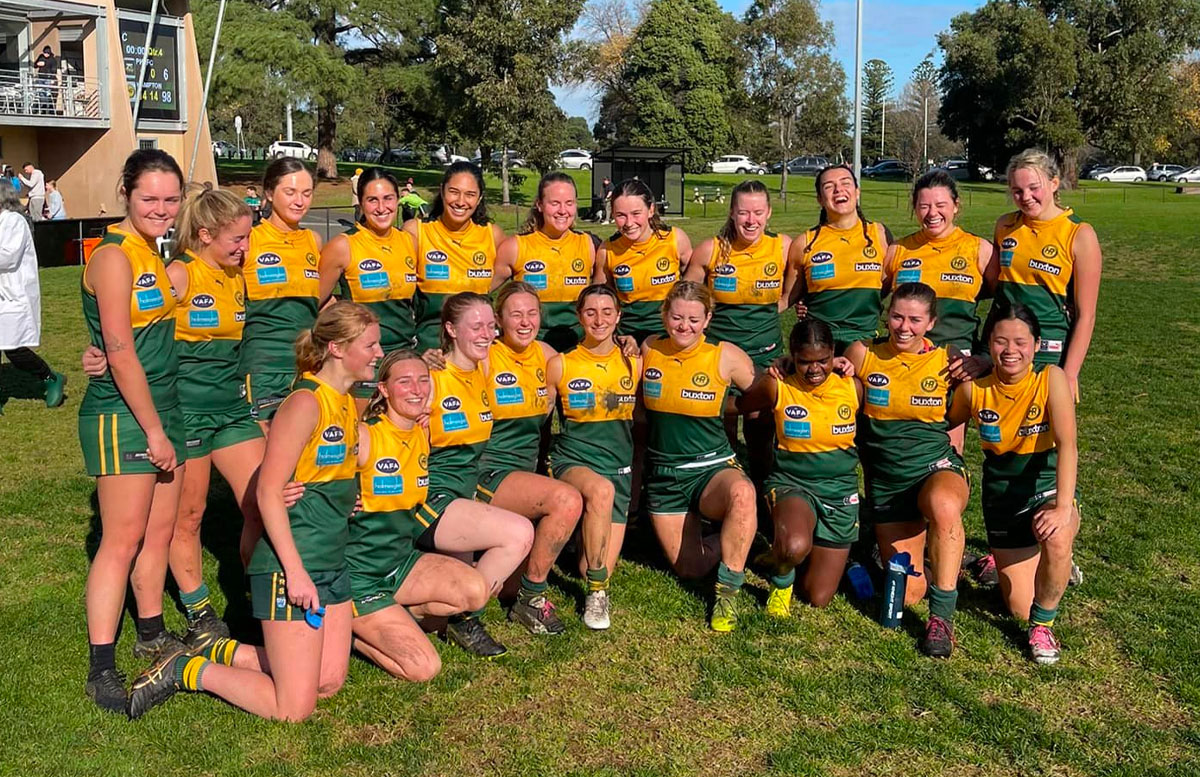 Another brilliant morning for footy with the sun out, the wind had been put away and the Rovers were chirping ready to take flight against the Power House. This week Alana, Lily and Laura were out, there are always some challenges, so hopefully all the Rovers Women would step up.

It was a typically strong start by the Rovers Women with a couple of early goals to Greta setting the tone with her strength and skills.  Tayla who’s been having a brilliant season was creating havoc and the the Power just couldn’t keep up with her.  She got on the board with a nice goal and when Steph followed with her first for the game, suddenly the Rovers had a very handy lead.  At quarter time it was Rovers (26) to the opposition (0) who’d had

a ‘Power Outage’ for the term. (Sorry about the corny pun but co captain and this week’s self-appointed co author, Hayley insisted it got included)

Although it was nice day, the conditions were very slippery but we seemed to adapt quicker than Power House even though we were playing on their home turf.  The Rovers were using handball to great effect to keep the ball moving forward. The sublime skills of Kera were on show as she weaved brilliantly around the opposition players, she topped off one such display on the run with a ripper goal!

Maxine who is such a valuable player to the team was continuing her really good form with her strong work in the packs and around the ground.

Shae’s pick up and burst off the backline was great footy and Bella’s work rate was being rewarded as she picked up multiple disposals.

Someone must have ‘flicked the switch’ for the Power (pun courtesy of Hayley again!) as they put through a nice goal (their first score for the game)

The Rovers really put their foot down this quarter as they were further inspired by the hard footy and fantastic aggression from skipper Mandy. The goal kicking machines Steph and Millie were on fire with a couple of goals each for the quarter!  Maegan finished off the quarter with a great goal following some brilliant Rover’s team play.

Right for the start of the game Poppy was shouldering most of the ruck work, she was doing a magnificent job not only in the ruck but also on the backline taking saving marks and creating opportunities when going forward.

The main points from Wardy’s three quarter time address to the girls was to move the ball on as fast as we can, continue our hard running, try a few switches and aggression as always!

Around the ground throughout the game there was great plays…Casey’s great running, Jess took a classy overhead mark, Courtney’s strong mark under pressure, Harmoni’s straight through work on the backline and Kristy’s relentless pressure on the opposition.

In the final quarter the Rovers were running hard, we stacked on a few points before a chain of handballs ended with Millie’s third goal.

Later in the quarter Hayley must have ‘plugged’ us in as we ‘surged’ to victory…with a long range set shot goal by EmJ and the same from Poppy, both so well deserved after their great games.

Another big win by the Women and no doubt a great percentage booster!  Steph Peacock continues kicking goals and this week she had greater support with Millie Smith (4) and Greta Robertson (3). Steph currently sits on 30 goals for the season, 17 ahead of the second place getter and both Millie,  Greta and Maegan Miller are in the top 10 in the Division.  Great to see Kristy Ebbott playing well and then back at the Boss for lunch to see brother Scott have his first game in the seniors for 2022.  Probably the reason for his BOG performance – sibling rivalry!