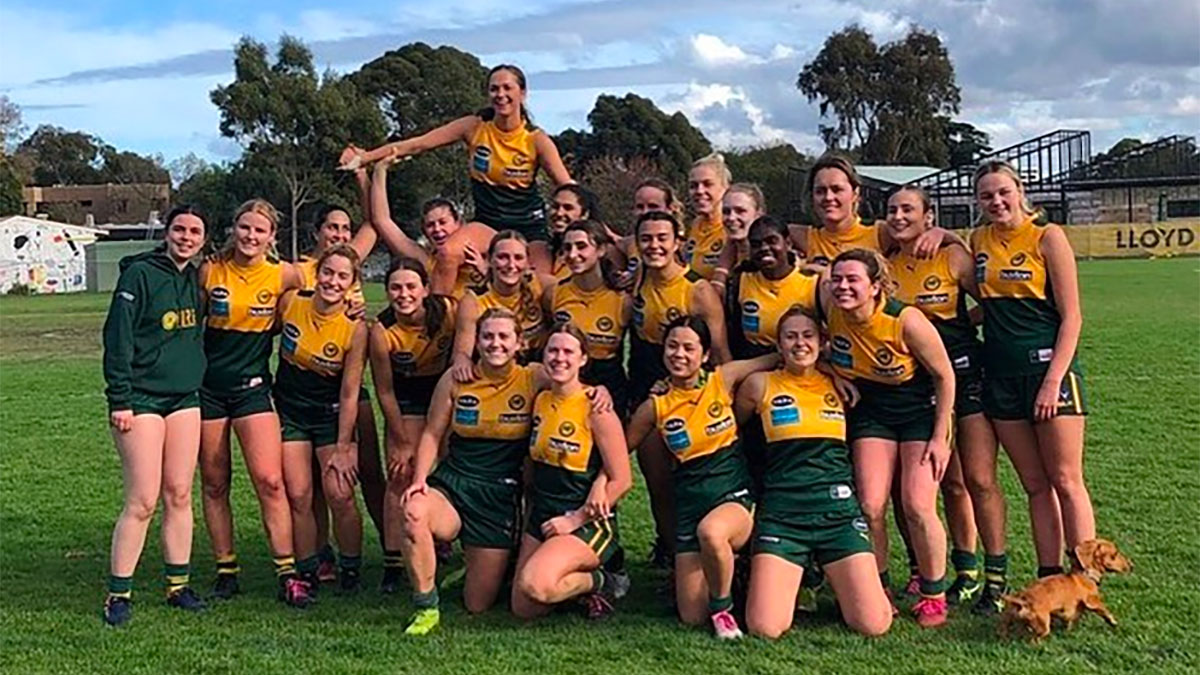 The focus was on the Rovers Senior Women’s team on Saturday, with the Senior Men having the bye, and the girls didn’t disappoint, putting on another strong performance to win game number eight.

It was one vs two at Albert Park Lake in an early game kicking-off at 9:20am in what marked a significant milestone for the club. Mandy Naylor became the first woman at the Rovers to play 50 senior games for the club.  Mandy has become a stalwart of the Rovers since she first came down a few years ago, initially as a trainer, and then a player in the inaugural season of VAFA women’s footy.  This year she shares the captaincy honours with Hayley Gould, a formidable duo!  A courageous player who never avoids a contest, such is the case coach Brent Ward exhorted the players to “play like Mandy” – an acknowledgement of her determination.

On to the game.  Our playing assistant coach Alana Gadsby lined up in the ruck at the start of the game up against her opponent who was about 30cm taller and winning most of the taps as a result. Gradually as the game progressed however, Alana’s tactical nous overcame her physical disadvantage so that around the ground she was able to outrun and outplay her opponent.

The first quarter was a real arm wrestle, with a lot of players on the ball and not helped by the dewy, slippery conditions and the big packs. The Rovers mids were going in hard at every contest and the opposition knew that they were up for a tough day.  Hayley, Jasmina and EmJ in the centre were hard at their opponents and the ball and when it went into the Parkers forward line the attack on the ball by Kristy, Max and Bella restricted greatly the oppositions scoring chances.

There was a bit of niggle in the game and when the ump spotted it off the ball, the Rovers were awarded a free kick and soon after, Jess was rewarded when she evaded two opponents and kicked accurately for a goal.  Steph Peacock was equally effective, with two goals before half time.  Greta  Robertson was providing a target to the mids and presenting well at every opportunity.  At the main break, the Rovers were 13 points up, but really except for the first 5 minutes of the game when Albert Park did all their scoring, Hampton controlled the play.  In fact, after that first 5 minutes, the Falcons only scored 3 points for the rest of the game.

Half time was a bit strange as there were no change rooms as the ground was being redeveloped so it was a boundary line huddle as the coach worked out his moves.

In the third quarter, the Rovers continued their relentless attack on the ball.  Some of Mandy’s clearances from the backline were inspirational, Harmoni Collins was playing well on one of the big Albert Park forwards and Kristy Ebbott, as usual, was her cool, calm, collected self as she attacked the contests.  Kera Galaminda Geller, our 16-year-old wonder recruit, seemed to just float on air in the third as she danced around opponents, outsprinted them and topped it off with some clever kicks forward to her team mates.   Max Behnke and Bella Cameron both seemed to have settled well into their defensive roles and together with Kristy, Mandy and Shae are forming a strong defensive unit. The highlight of the quarter was the long bomb by Greta that split the sticks.

At the final break, the Rovers had a clear lead and seemed over the line but the margin was just three goals.  The final quarter started with Hampton peppering the goals at the city end without reward.  The girls had control and some of the handpassing and foot passing, as the conditions had improved, showed the skills that the team had developed over the last couple of years.  Tayla Jones on a number of occasions  showed her speed, skills and elusiveness when in control of the ball.  But in the end, it was a fitting tribute to Mandy that on her 50th, she played a great game and led the team to a spirited victory.

After the Thirds win, it was off to Boss James Reserve for a double-header featuring the Thirds and Under 19s.