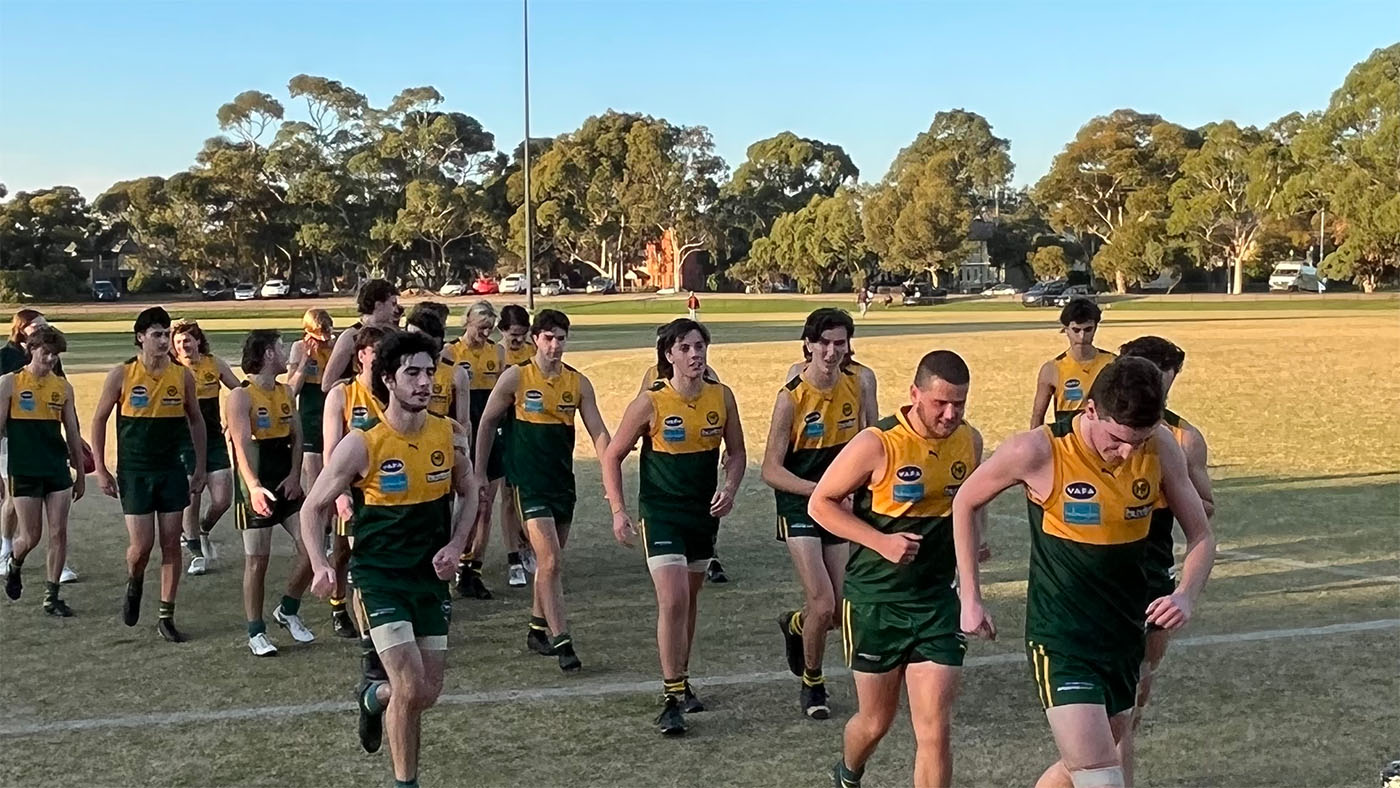 The Rovers Under 19s produced a fine performance to defeat Old Xaverians at Boss James Reserve on Saturday.

Both teams were on 3 wins and 3 losses so it shaped as an important game all round.

Conditions were close to perfect with clear skies, no breeze and the ground in great condition.

Kicking to the David St end, the Rovers started brightly with the clearance from the first centre bounce and a snapped goal to Hugo L within 30 seconds.

But then what followed for the quarter was the Old Xavs dominating the stoppages, taking advantage of the Rovers’ over-use of the handball and getting plenty of forward entries.

Daniel Field started well in defence, but there were real problems with the Xavs’ tall forwards taking marks and being 100% accurate in front of goal.

Two more goals to the Rovers for the quarter, 1 each to Dan Hall and Luke Nixon-Smith, but 5 goals straight to the Xavs saw them 10 points up at quarter time.

It was a different story in the second quarter.

Whilst the Xavs continued their intensity, continuing to out mark and out tackle our boys, the Rovers’ backs got right on top of their opponents and refused to concede a score, the likes of Daniel Field , Alex Barton and Hugo G stopping everything coming their way and giving great drive out of defence.

Peter Somogyi was everywhere and kicked the Rovers’ first goal for the term, and Lachlan Costello and Mika were strong in the contests, Mika being a welcome inclusion for his first game after injury.

Jake Klinkhamer copped a heavy hit to the head whilst over the ball, resulting in a free kick and forcing him off the field.

His opponent was reported and later accepted a 2 week suspension. It was a timely reminder that head high contact is to be avoided wherever possible.

Dan Hall then kicked his second goal and Flynn Lohan marked strongly and slotted the Rovers’ third for the term. It was good response from the Rovers, the only blemish being some inaccuracy in front of goal with 5 behinds.

The third quarter was pretty tight and whilst the Xavs threw everything they could at the Rovers, they couldn’t make inroads into the Rovers’ lead.

Whilst the Xavs scored 2 goals, the Rovers were more than equal to the task. Dan Hall kicked 2 more goals, the Xavs’ defence unable to handle his speed and small forward smarts.

Oscar Brown got busy, getting plenty of the ball and involved in both goals. Jake was back on the field and showing no ill effects from his knock.

Charles Kilburn scored our third for the quarter and by the 3 quarter time siren, the Rovers had increased their lead.

In the final term the Rovers continued to attack the goals and had 6 scoring shots. Our defence continued their dominance, repelling pretty much everything that came into the Xavs’ forward half.

Flynn and Oscar continued their work rate around the half forward line and the Rovers rounded out the game with 2 final term goals, 1 to Tom Folino and 1 to Luke after a mark on the lead

Only 1 goal was scored by the opposition in the last quarter, and whilst the heat went out of the game to some extent, this was largely because our backs were well on top and consistently prevented the Xavs from hitting the scoreboard. Overall a solid performance.

It was pleasing to see the boys back on the winning list after 3 defeats on the trot, and particularly so for the coach against his old school.