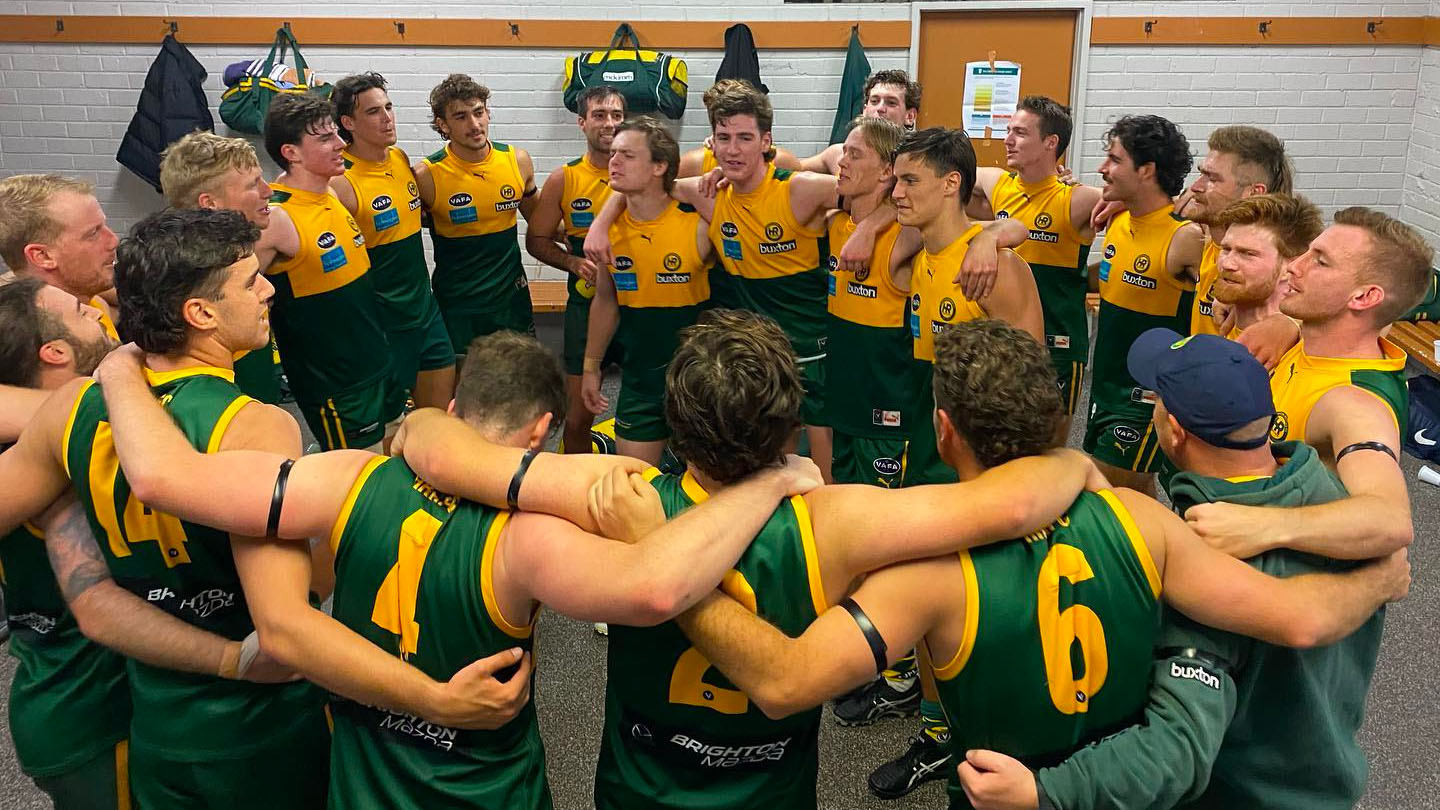 Hampton Rovers went into the opening round of the 2022 season with several changes to the team, even from Thursday selection night.

Two new players came in, Lachy Carrigan from Richmond’s list and Ben Marron, both exciting additions who will make an impact this year.  By Saturday morning there were two further forced changes, with first ruck Ben Audige and Lachy Cairns out.  In came under 19 captain Hugo Lay and Ned Gray was released by the Dragons.

As forecast, the game started in light drizzle and as a result the first quarter was an arm wrestle.  Fumbling, falling over, missing targets with handballs it was tough going in the adverse conditions.  The big surprise was Sam Clements, back from a year coaching the Reserves, started in the ruck.  He clearly has a few more seasons left in him as he battled hard all day at the ball ups, but it was clearances and around the ground where he just kept getting possessions. Carnovale, Fogarty and Folino were hard at it in the middle but our movement forward was erratic and it was no surprise that the scores at quarter time were so low.  In fact, as we had the wind in the first the quarter was a bit of a disaster!

The second quarter was goal for goal.  Every time the Rovers scored, they did and we just couldn’t get a gap on them.  New players in Hugo Lay and Ned Gray were prominent.  Cam Morris was putting fear into the minds of the Marcellin backs with his ferocious tackling, Cogs was moving well up forward but the ball was just not getting to him.  Lachy Carrigan was solid in defence and 2022 debut defender Oscar Roberts seemed to be relishing his new role.  Great to see Perko continuing his form of 2021 and those green boots flying up and down the outer wing.

The quarter was topped off by a fine mark and goal by Joel Melnjak from the fifty.  Sixteen points up in a close contest.

Hampton had to make the most of the wind in the third.  The quarter started with Marcellin in control for the first few minutes.  We kept breaking from the backline but our delivery forward was ordinary. I felt sorry for Max Coughlin early in the quarter as his sharp leads were rewarded with balls over his head or out of bounds.

Then, at the half way mark we finally clicked. The targets were hit, handballs were slick and the leads honoured.  Six goals to nil in the second half of the quarter and we were in total control. Debutante Ben Marron seemed to have the ball on a string up forward.  He played a sensational second half.

Ned Gray showed great skill and his delivery of the ball was accurate and the forwards were loving it.  Goals to Hugo Lay, Jacob Gray and Ant Folino were all the result of great teamwork.  In this quarter our backs held firm.  Max Van Der Strattan and Oscar Roberts had their big blokes under control.  While Ben Kneebush, Cags, Traegs and Crispy kept their dangerous forwards out of the game.

Supporters’ hearts were in their mouths near the end of the quarter when it was clear that Traegs, running back with the flight of the ball was on a trajectory for a collision with his opponent.  He took the mark and the big hit – courageous stuff.

The last quarter was a bit of a procession.  53 points up at the break we knew we had the game in the bag.  We kicked the first 2 goals of the quarter and at that point the urgency went right out of the game.  While outscored in the last term it was largely due to some heavy questioning of the umpires decisions which led to 50m penalties.

All in all, a great first up win in circumstances where many present at the first bounce would have been anticipating another Marcellin win at the Boss due to the number of changes that the coach had to make before the game started.