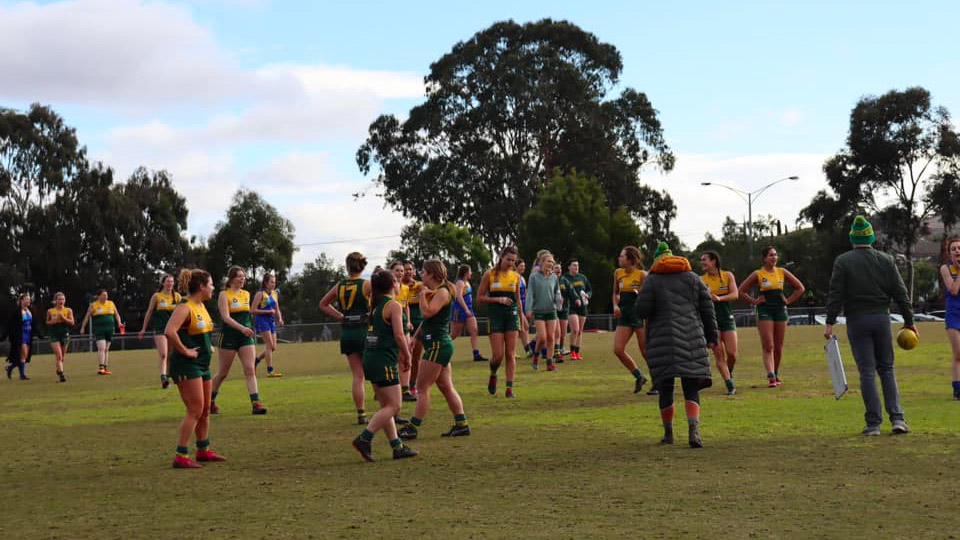 This week the Hampton Rovers Women were up against Bulleen Templestowe – an away game for Rovers on a chilly but clear Saturday morning.

One of the Bulleen girls ran through a banner for her 50th game (a great achievement) and it was very clear to see/hear that they were fired up to give it to us!

However the Rovers were ready!! Right from the start both teams were throwing themselves in as the ball went back and forward from one end to the other. Bree-Anna broke the deadlock with a great goal, roving off the pack.

However we were being challenged but our backs led by our ‘M-Team’ of Maxine, Mandy, Millie and Madeleine were doing an awesome job keeping Bulleen from scoring. Isobel just missed a snap on goal but the Rovers were looking dangerous.

Then first gamer Kiana Lynch took off down the flank, gave off and received twice and finished with a magnificent team goal (would be hard to beat for ‘goal of the year’…at any level!!!)

By now the Rovers were warmed up and pumped…Sally Walker showed her skill and innovation with a ‘mid air strike’ on the ball sending it well forward. Hayley’s hard work and tackling was inspiring, as was Bianca’s work rate and talk which was bringing her teammates into the game.

A great example of this was the first and second effort shown by Grace in the middle of a pack, keeping Bulleen from getting the ball free.  A typically brilliant snapped goal from Steph was just what we needed in this tight contest.  Templestowe also got a late goal in the quarter against the tide to keep them in it.  Unfortunately, Kiana went down with a hamstring injury. She had played magnificently in the first half. We wish her all the best for her recovery and for a fantastic football career ahead.

The match was really a low scoring struggle with both sides giving their all.

Jas was everywhere, backing up her teammates, racking up possessions and having some sort of game!  Amber, Harmoni and Fran were marking well and creating opportunities for us with their ‘hard at it efforts’. Our ‘hand-balling out the back’ was being used perfectly in the conditions, none better that when Shae picked the ball up off her toes and fed it out with a perfect handball.

While scoring was hard to come by, we had Casey, Bella, Isobel and Lucy all making strong contributions around the ground. Cath as always was giving her all.

With only a two goal lead going into the last, albeit in a low scoring contest, we still needed to hold our nerve and give everything we had. Kristy going in hard as she always does, copped an accidental knock and had to come off to get patched up. She was soon back on and playing a brave role across half back keeping Bulleen out time and time again. A throw in deep in our forward line was taken directly out of the ruck by Greta (Tom Hawkins’ style!) and she snapped truely for a great goal to back up her really nice game.  Tayla also had another ripper of a game showing her skills, passion for the game and fantastic team play.  A great win by the Rovers women who were challenged but had still managed to keep the opposition scoreless in the last half which as a great effort in a keenly fought contest.