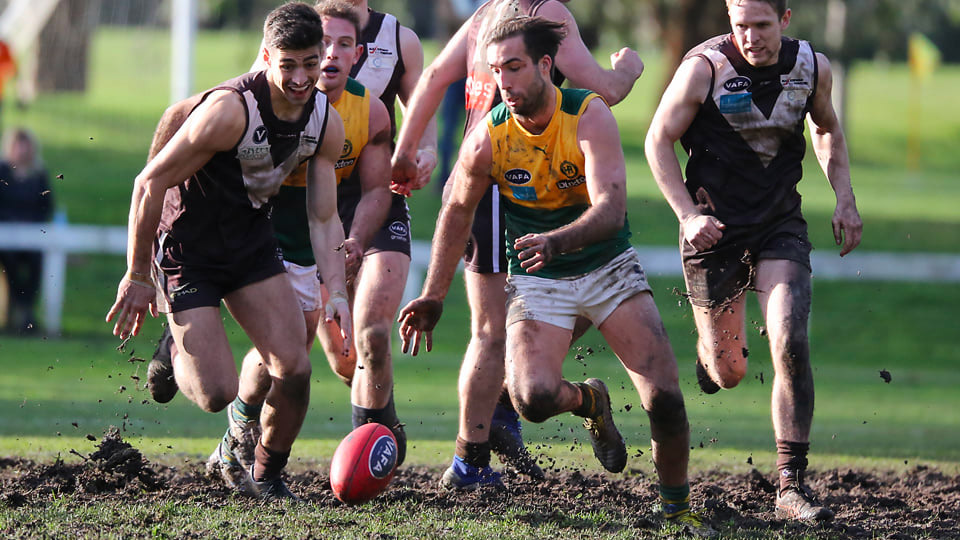 Hampton Rovers fell to their fifth straight on Saturday, going down to Old Ivanhoe by 25 points at Chelsworth Park.

It was a frustrating game to watch for the Hampton Rovers supporters who made the trek out to Ivanhoe on Saturday. Last week in one quarter we kicked 1.10 to throw the game away. This week we sat comfortably at quarter time 5.6 to 0.1, in total control, on top all over the ground and end up at the 26 minute of the final quarter having added only one more goal in nearly 90 minutes of football.

Strangely, in that last 2 minutes when at least one player was returned or decided to return to his proper position did we manage to bang on a couple of late goals.  Of course, in that same period Old Ivanhoe had kicked 12 to run out comfortable winners.

We did start well.  Joel Melnjak, up forward for the first time in his senior career had kicked 3 by quarter time.  He was presenting well and either earning the free or taking the mark.  Benji was again winning in the ruck as he has all year and for once our mids were taking advantage of his taps. Speedy seemed on song and the skipper as usual was in hard and often and even snagged a goal with a clever snap.

There was a breeze but really the benefit wasn’t by any extent of the imagination 5 goals.  Still in the second quarter, Old Ivanhoe took over, banged on 4.4 for the quarter to our solitary point to even it up at half time.  We were still in it, we defended well but were just unable to put any scoreboard pressure on the opposition.  Our desperate long bombs or wishful long bombs made it too difficult for our forwards to take advantage.  Many kicks seemed to just keep falling into the opposition’s arms.  At the centre bounces it was worrying that time and time again the Ivanhoe mids were getting the ball out of the centre with seemingly little opposition making the backs jobs that much harder. At the main break we were a goal up and with the wind in the third I thought that we were still in with a chance.

How wrong was I?  For the first 20 minutes of the quarter, it was an arm wrestle.  Our players were fighting hard but you could tell that the Ivanhoe boys had their measure. Strangely it was their smaller mids and forwards that seemed to be causing the problems. We kicked the first goal of the quarter at the 20 minute mark, a Christian Carnovale special from the boundary on the 50m line, the tension eased a bit but when a good mark in defence by us was followed by a smothered kick and then a goal by OI on the rebound and then they quickly followed up with a coast to coast the margin by the end of the quarter had narrowed to 4 points.

We were beaten to the ball time and time again, lost the ball in dispute and on occasion our attack on the ball was poor.  Joel Melnjak was moved back to stem the flow and continued his good form, Chris Perkins on the wing kept running and competing, Benji was still on top but really, we seemed to have just stopped. Late in time-on, we suddenly perked up, a strong mark and goal to Max Coughlin and really, he could have had two had the umpire been a bit more understanding.  A minute later a great pass by Carny to Speedy who spotted Harry DeWolf in the square who swung a Pele-like boot that connected mid-air with the ball for a goal on the siren.  A bright end to a disappointing day.

All Premier sections now have a two-week bye, before the Rovers host Ormond at Boss James Reserve on July 24.

The Reserves were never in the hunt, going down in the early game, but it was better news for our other three teams again.

The Thirds recorded an important victory in their quest for a top-two spot, defeating Glen Eira by six points at Packer Park. The Senior Women kept their winning streak going with a 32-7 victory over Bulleen-Templestowe away from home, while at Boss James Reserve, the Under 19s had a 37-point win over Marcellin.

Also, a big thanks to everyone who supported the club’s $2K Day on Sunday, in what was an important fundraiser for the club after a covid-hit couple of seasons.