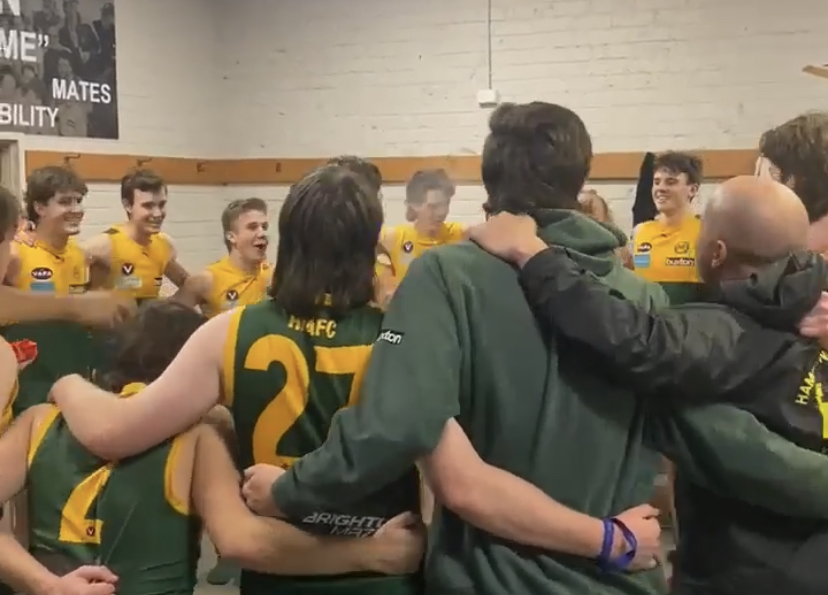 What a great day for footy. Sunny with little breeze. Rovers won the toss and kicked to the David St end. Our Captain Liam O’Driscoll was back leading the team and Finn Meadows was making his debut.

Shortly after the start the Rovers had the first score on the board – a point. Hugo was dominating early and Joey got the first goal after being infringed by his opponent. Liam took a great mark at CHF, Mo had a left foot snap but the Rovers were not hurting the scoreboard.  Then Max won a ruck tap and out of the centre Benny Maz kicked a great goal.

The Rovers’ half back line was holding tight and Garbo was showing his usual courage. St Kev’s were starting to take over but could only kick points. Hugo took a handball from a teammate and another goal to the Rovers. Lachie C was applying tackles and debutante Finn Meadows won some contests in defence. Two of the Bens (Dools and Maz) were taking contested marks but St Kev’s were able to score a goal with a few minutes to go in the quarter.

The Rovers were being pressured in defence and testing the likes of Garbo, Cam and Zac. Langas was taking marks, one well contested. Liam kicked for goal but was just off line. Flynn had to win the ball in the back pocket and did so, but St Kev’s kicked the first goal of the quarter. Goldy and Will K were combining well and Zac took a huge contested mark, crashing heavily into the ground. The Rovers kept the ball locked in their forward line for some time before B. Maz kicked his 2nd goal. Liam was then tackled high and kicked truly. The coach was yelling for the players to talk to each other and a few minutes later, Matt S got the ball off to Liam who kicked another goal opening up a handy lead.

The start of the second half there was very little wind so no advantage to either side. Dools used his body to take a great mark at CHB. Lachie C was taking on the opposition, bouncing and kicking the ball along the wing. Then Max L passed to Per B. who gave the ball to Liam and a goal resulted, his 3rd for the day. St Kev’s replied with a goal and then the Rovers, through great teamwork between Langas, Jacob Beames, Lachie C, got the ball to B. Maz who marked and kicked his 3rd goal from 40m out.

Lucas was having an impact on his wing, tackling his opponent, then gathering the ball and kicking to Joey, who kicked his 2nd goal.

Then St Kev’s scored a controversial goal, the claim from the Rovers was that the ball hit the goal post, while the goal umpire claimed it bounced off him into the goal post. But it was St Kev’s who went on to score 5 goals for the quarter to the Rovers’ two.

The Rovers needed to get going this quarter because if the wind was to get up it was likely to favour St Kev’s. Coach Zac Pirrie had got stuck into the boys at ¾ time after their third quarter drop off effort and they responded beautifully. Seb de Wolf had a great quarter as did Ben Crothers. There were really good passages of play. In one instance Garbo got the ball to Max L who gave off to Seb who kicked to Will K with a point resulting, then a perfect coast to coast goal (from Joey’s boot, his 3rd for the day) after a St Kev’s behind. Then there was goal for goal twice, including a brilliant snap from Brodie from the forward pocket and one from Lachie C after a stoppage near the point post. St Kev’s had their chances and the game wasn’t over until there was a few minutes left with the sealer coming from Ben C after marking a stray St Kev’s kick about 30m out.

Great win for the boys beating second on the ladder to take their spot. Coach Zac Pirrie was pleased to be back on the winners list and we now look forward to the clash with Glen Eira/McKinnon in our first match against them since the U19’s Premiership win in 2019. This is definitely the one we want to win!