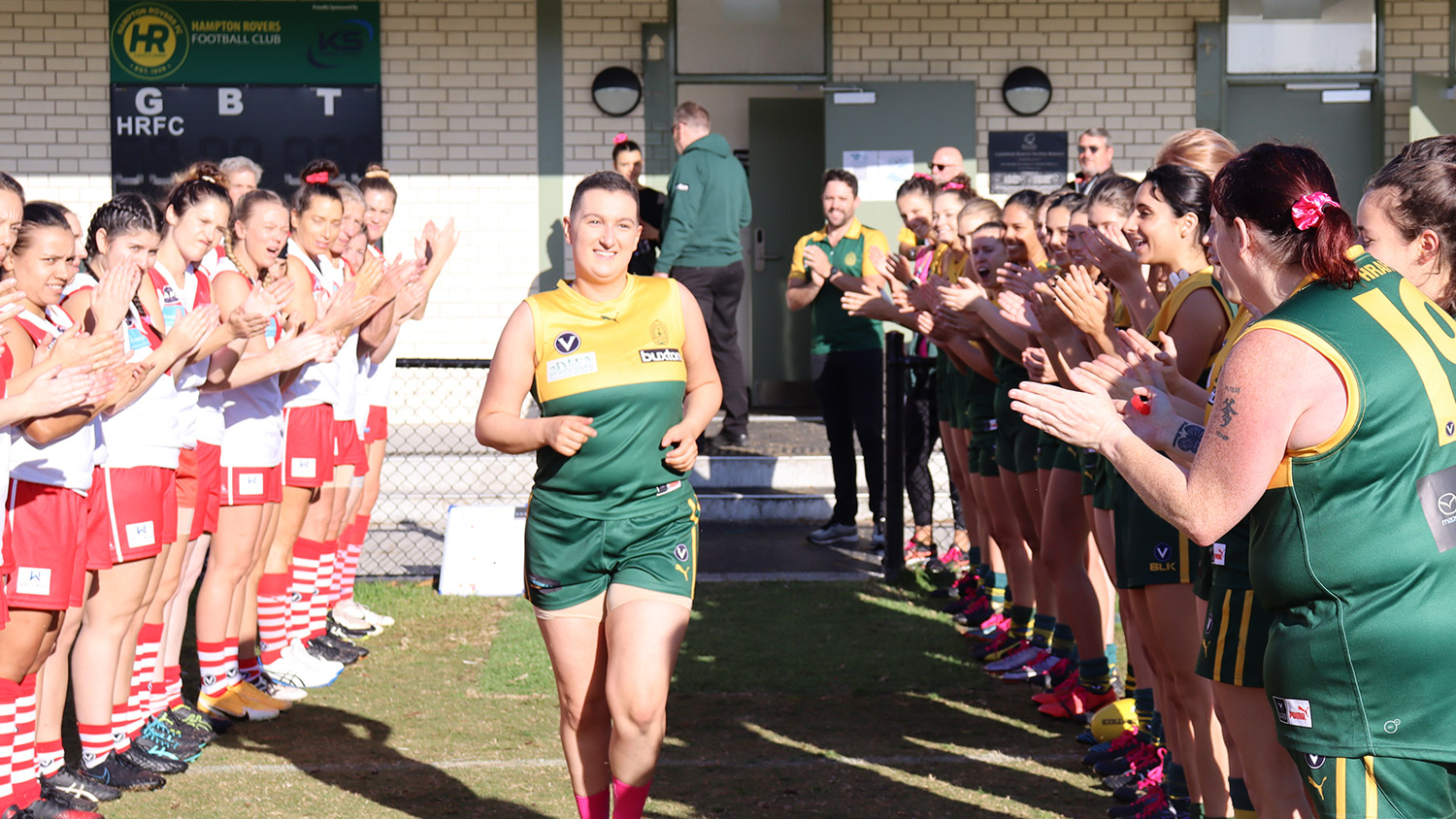 Rovers supporters have witness many memorable occasions over the club’s long and proud history, but Saturday’s return to the footy field for Frances Della-Bosca is up there with the most inspirational.

Fran was diagnosed with breast cancer in August 2020 but has continued to have an amazingly positive attitude throughout the journey. Thankfully, she’s now officially in remission which everyone at the club is so pleased to hear, but the journey is far from over.

On a day where Hampton Rovers turned pink in support of Breast Cancer Network Australia’s PLAY4BCNA Round, Fran made her comeback to the footy field, running out in the green & gold for her first game since she was diagnosed.

Thanks to club sponsor Knight Sport, a pink Sherrin football was signed by Fran’s teammates and presented to her inside the rooms prior to the game to mark the occasion.

Rovers and South Melbourne players formed a guard of honour for Fran to run out onto Castlefield Reserve, before being greeted by President Gary Nash. A truly inspirational moment for all in attendance. Players also wore pink shoe laces and scrunchies in support of BCNA.

Senior Women’s team coach Corey Randall explained how Fran has continued to be the heart and soul of the group, event being one of the five players that attended pre-season training prior to Christmas, not to train, but just to be around the club.

“Fran has always been there helping me set up or pack up and has been the first to put an arm around an injured player.”

“She would often text me and apologise for not coming to training due to treatment.”

“Fran is an absolute delight to coach, always listening and that shows in the increase in her skills and understanding of the game.”

President Gary Nash said, “The whole club is proud of her courage and determination and we wish her all the best in her ongoing recovery.”

The Rovers women recorded another win to continue their undefeated start to the 2021 season. Read the match report here.

From Castlefield, the attention turned to Boss James Reserve, where Fran was guest speaker at the Women’s Luncheon. It was one of the biggest the club has held, with the ‘house full’ signs up and around 130 people in attendance, with the social rooms dressed up in pink.

Interviewed by Women’s team captain Bianca Lenarcic, she told the room of her journey in battling the disease over the past year and the hurdles she has faced.

Organised by the women’s team, it was a fantastic luncheon featuring lucky door prizes, raffles and even a special performance by Reserves player Joel Bowditch on the guitar. The room looked fantastic with all the decorations, table flowers and pink everywhere.

It was also the first all-day luncheon hosted by the club, meaning the bar could remain open throughout the senior game and the women could enjoy the hospitality on offer inside.

So far, the club has managed to raise a total of $2,228 for BCNA which we’re super proud of! We thank everyone for their generosity and if you would like to make an additional donation to boost this figure even higher, you can do so online here.

The Senior Women’s team are in action at home again this week and we encourage supporters to get down to Castlefield Reserve at 9:20am to watch them take on Bulleen Templestowe, before heading to the Boss to watch the Seniors face Old Mentonians.