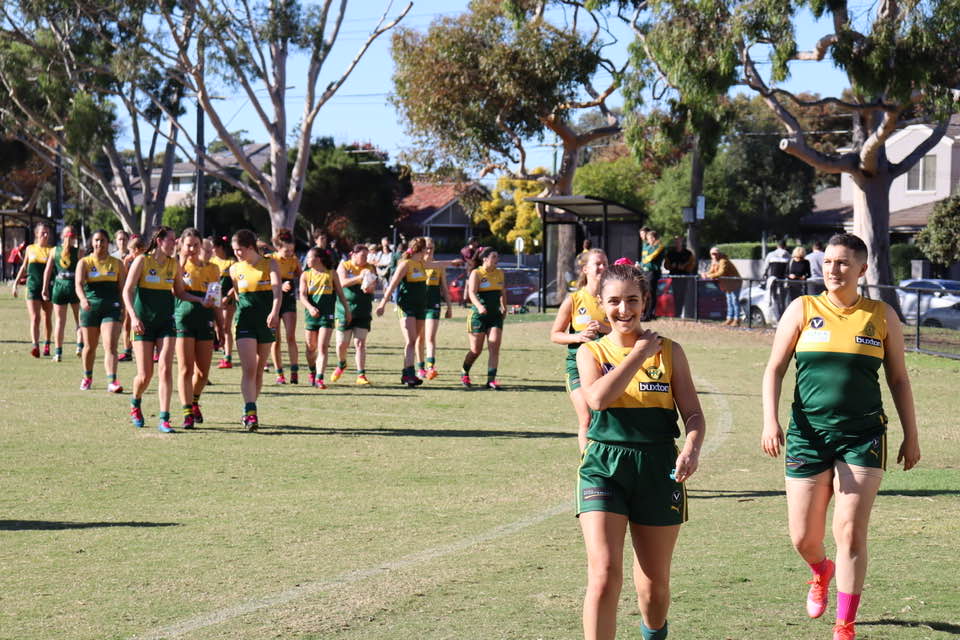 The Hampton Rovers Women were up against South Melbourne Districts at Castlefield this week. It’s always an honest and very competitive contest between these two sides however the Rovers were definitely starting favourites with their great form so far this season.

South got the initial forward 50 entry and a got a point on the board for the first score of the match…so there was no time for the Rovers to be complacent!

Some nice work from our courageous Captain Bianca combining with Shae Raymond and Stephanie Peacock, allowed Alba in for a shot at goal which just missed but the Rovers were away!

One first goal of the match followed not long after with a nice snap by Casey Politarhis who had started brilliantly (note: and was brilliant throughout the whole game)

Great Rover’s team play through tackling, shepherds, plenty of talk and doing the ‘one percenters’, was really paying off. Another snapped goal, this time by Gabriella Samkova finished off a strong opening quarter for the girls.

South Melb were pressing in the second but Grace McArthur took a nice intercept mark in defence and Isabella Cameron tackled strongly, turned the ball over enabling the Rover’s mids to swoop and drive the ball deep into our forward line.

The play of the quarter came when Kristy Ebbott took a ‘one grab’ mark, played on and got it over to Casey who passed to Bree, she snapped truly for a great Rover’s team goal!

Then later in the quarter (not to be outdone!) it was Mandy to Steph over to Maegan who calmly slotted through another great goal for the team!

The first goal of the Third was to South Melbourne followed by big celebrations, as they knew how hard it is to get one against the powerful Rovers side. Hampton Rovers came forward from the next centre clearance where Isabel Lynch created an opportunity for Casey to get it over to Bree who marked and converted with a nice set shot on goal.

Kristy came streaming forward again, where Maddie showed good attack at the contest and helped get it over to Maegan, then she got it to Gabbie who slotting her second for the match.

Throughout the game Mandy’s poise and drive out of the backline was something to behold, very ‘Pendlebury’ like. The Rovers were sharing the ball around brilliantly and after an awesome tackle by Frances Della-Bosa, the ball spilt free on our forward line, unfortunately Bree’s shot just missed and cannoned into the woodwork. Shortly after it was Bree and Fran again in the action and this time it was Fran’s shot that just missed and sailed through for a point. However the ‘Fran Fan Club’ behind the goals were in awe of her efforts!

There were plenty of highlights, Casey’s ‘almost the best’ when she took off for a long run and slotted a beautiful goal only to be judged by the umpire to have run too far.

Not long after though, Steph came streaming off the backline and got the ball to Maegan for a long range chance at goal. Her shot seemed to bend one way and the other before drifting right through the big sticks! It was a fitting end to a comprehensive Rover’s victory.

In his post game speech Corey was very proud of the girls and the way they had responded to all the vital team instructions, particularly the ‘little things’ such as shepherds, smothers, talk and second efforts to help out each other in every contest.