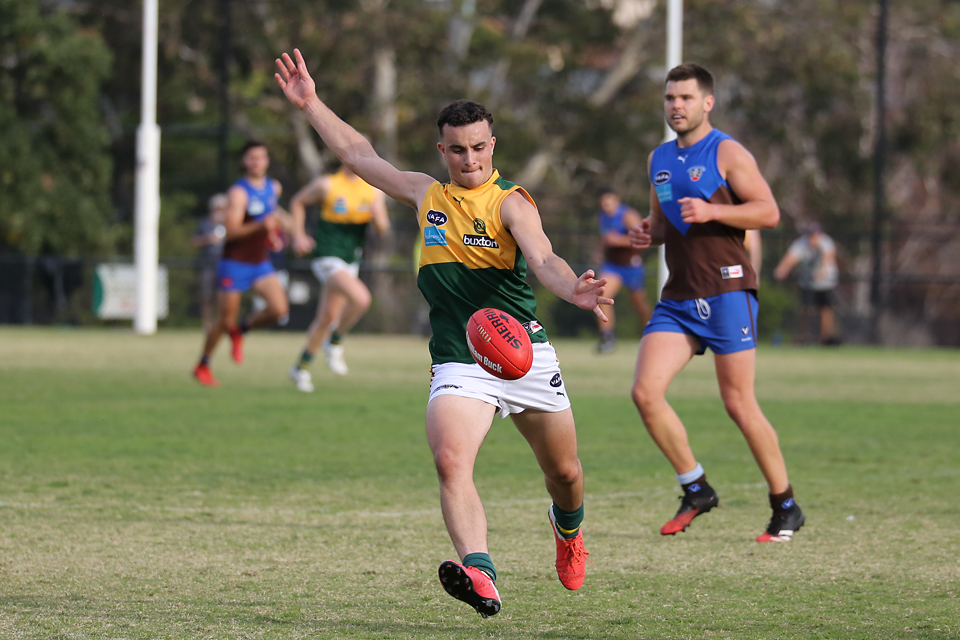 Wins have been few and far between for the Rovers at Ormond in recent years, but a seven goal to two final term set up a memorable win for Hampton, to claim the Buxton Cup.

It was a great day for footy and while barely a breeze in the early game, by the time the main game started, it had picked up and favoured the southern end – at least a couple of goals.  The game started at a hectic pace and while Ormond had the bigger bodies, Hampton had quicker ball movement.  Benji Audige was on top in the ruck, our midfielders were going in hard and pushing the ball forward and the forwards were holding it in the forward line.

Rovers were first on the board, with an early major through Eren Soylemez against the breeze, before the home side responded with a goal to their star recruit, Matt Suckling. Ormond kicked another 3 goals in about 5 minutes to split the game open. The floodgates closed when Nate Smith, who was everywhere, picked up the loose ball and banged it onto his boot to be marked by Max Coughlin who kicked truly for a goal.

The Rovers had as much of the play but just couldn’t put the score on the board and when Ormond kicked two more, the lead went out to 24 points and the visiting supporters were worried.  Fortunately, Nathan popped through one in time on to reduce the lead to 3 goals.

An interesting quarter with Benji clearly enjoying the support of another ruck, that role being played by U19 captain Liam O’Driscoll in for his first senior game for the season.  A great debut whether in the ruck or around the ground, a couple of big marks and some great ruck taps.  Ben Kneebush, down back, added solidity to the backline and the return of Rich Atkins to his home on the last line of defence showed why he held down a spot in Sandringham’s VFL backline for half a season a few years back.

In the second, Hampton had the wind, and the boys didn’t let the large contingent of visiting Rovers supporters down.  Eren took another mark in the square for the first goal, The Ax won the contest deep in the backline, delivered to Cam Morris who shot a bullet like pass to Matty Rieniets for a goal. The Ormond boys were stunned and when Nate Smith baulked 2 opponents and ran into the open goal, we were smiling.  Goals quickly followed to Max Coughlin from a good mark and another from Eren who marked on the lead.

At the 30 minute mark of the quarter the backs had held Ormond scoreless.  Pross was dominant on his flank, big Harry DeWolf was holding his own at CHB, Joel Melnjak at full back was roaming the backline at will and Lachie Cairns was using his pace to advantage against his slower opponent.  On the wings, Chris Perking was knocking up getting possessions, standing out in lurid green boots!  Captain Carnovale was going in as hard as ever and taking more of those courageous marks, while Sam Seach on the other wing was showing dash and daring with the ball.

Would you believe that after 30 minutes of good work, we let Ormond in for two late goals to let them back into the game, with the last a snap from deep in the pocket to bring the home supporters back into voice.

At the main break, the coach was pumped.  “We’re in front, you catch us if you can Ormond but you won’t as we want it more” he said as he urged his young team on.  “They’ll throw everything at us in those first ten minutes, you must weather the storm they won’t be able to keep it up” he said.  He was right. With the wind, Ormond kicked the first three goals, two from free kicks.  Rovers answered with three of our own. The first a great team goal with Benji taking the loose ball, passes to Prosser who hit Max Coughlin lace out 30 metres out directly in front.  Back to scores level with about 10 minutes to go in the quarter.

Harry McIntyre was a tyro in the centre square and around the ground in his best game so far in 2021.  Jackson Manning in his first senior game since round 1 2019, showed why he will be a valuable player for us this year.  His silky skills, elusiveness and sharp ball movement was causing the Ormond opponents trouble.  Cam Morris should get special mention. His attack on the ball and the opposition when they had the ball had all of Ormond treading warily!  A great four quarter effort rewarded with a couple of goals.

Ormond kicked two goals in the dying minutes of the third quarter to set up what would be a thrilling final 30 minutes, leading by nine points.  I thought a dry ground, a breeze slightly favouring our end and a team eager to win, that we would get home…and we should be fitter!

What a quarter!  We had kicked 6.4 before Ormond scored. The home supporters were silent, in fact many of them had left by the half-way mark such was our dominance.  Another goal to Eren Soylemez (his fifth), Cam Morris a free for a great tackle and goal, Seach from the square, Cam Morris for his second from a strong mark, Seachy again from a turnover in the pocket and the sealer from Jackson Manning.  Yes, Ormond kicked a couple in the last few minutes to narrow the margin, but it was game over well before they worried the scoreboard. The skipper Christian Carnovale was everywhere. 15+ possessions, 4 marks, 5 tackles and a goal.  Talk about doing the hard work as captain to lead the young Rovers to a monumental win over traditional rivals.

A sensational win against strong opponents, with some club stalwarts saying it’s the best win they’ve encountered in recent times. The victory lifts Hampton above Ormond on the Premier C table, sitting in third position behind Monash and Old Geelong.

Great to see our newer players becoming more confident with each game.  Max Coughlin, Cam Morris, big Benji in the ruck, Liam O’Driscoll, Dylan Melnjak, Chris Perkins and Harry DeWolf have only played a handful of games between them. Only one older player in the team on Saturday in Rich Atkins and he’s probably played more senior games than the rest of Saturday’s team combined.

With some nine regular senior players missing on Saturday due to concussion, suspension and general unavailability, there’s sure to be some headaches at the selection table in the coming weeks.

Watch the full match replay here and view photos from the game on Facebook here.

The win meant the Rovers collected the Buxton Cup, while Chris Perkins was awarded the Barnes Family Medal for his best on ground performance. The teams will meet again in round 13 at the Boss, but next up, it’s Preston Bullants this Saturday at home for what will be a big day, being BCNA round incorporating our annual Hampton Rovers Women’s Luncheon (more info & bookings here).

The good times rolled on down the road at Packer Park, where the Senior Women took on Glen Eira under lights in a battle of the two undefeated teams. Despite starting with 18 players and finishing with just 16, the girls battled it out to the end and managed to hold on in an exciting last quarter where we jumped ahead and held on for a great win.  Great to see Bianca in a BOG performance ably backed up by Max and Mandy.

In the early game at EE Gunn Reserve, it was Ormond who proved too strong for the Rovers in the Reserves game, winning by nine goals.

It was a double-header at Boss James Reserve, with the Thirds also taking on Glen Eira in a 1 v 2 game. It was a tight game until the final term where the Rovers kicked away, winning by 27 points.

The Under 19s then took the field and recorded a big 100-point victory against Old Scotch – view the match report here.

With such great performances on the field, make sure you join the club in 2021 by becoming a Club Member. We’re targeting 150 signed-up members this year and we’re getting closer…