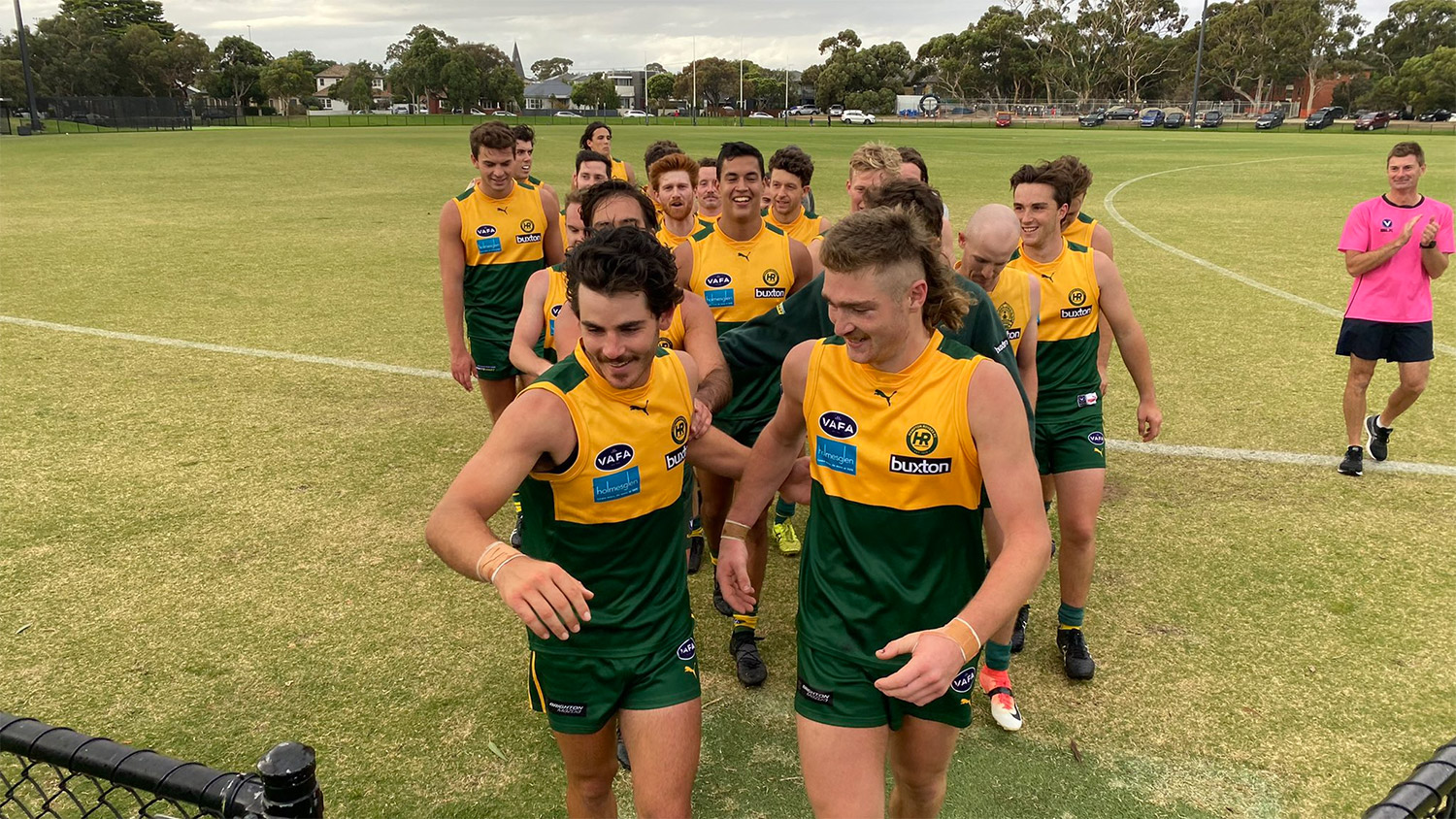 Footy returned to the Boss on Saturday and after many didn’t give the Rovers a chance, the home side finished strong to record a convincing win over Old Ivanhoe and deliver a statement to the rest of Premier C.

Ten minutes to go in the last quarter, in front of the social rooms, Nathan Smith grabs the ball in dispute, goes right to the boundary, confronted by an opponent goes left, baulks, side steps, a quick sprint and he’s clear, on the boundary 45m out and BANG – straight through the middle. The big Rovers crowd go berserk and we’re now 30 points up and home for our first victory and goal of the year nominee for 2021!

It was a tough contest.  Old Ivanhoe were nominated as Premier favourite for 2021 by a number of pundits leading into round one.  When in the first two minutes they had 2 goals straight on the board, we probably thought that they were correct.

Thankfully, the Rovers steadied and in the remaining 30 minutes of the quarter added 7.2 to 0.3 for a handy quarter time lead.  The bad news was that returning recruit Josh “Speedy” McPherson was off with a slightly twinged hammy.  The coaches would have been happy with his 2 goals in the first quarter onslaught, pity he missed the next 3 quarters as I reckon he was in for a bag.  Benji Audige was giving us first use of the ball from the centre and our mids were on top.  The visitors had no answer and with youngsters Max Coughlin and Cam Morris taking marks and kicking goals up forward, we were looking good.

Three minutes into the second quarter Max Van Der Stratten who was dominating the Old Ivanhoe goalkicking star went down with a rolled ankle and we lost our second player for the day.  Fortunately, Nathan Smith kicked his third a couple of minutes later, but we seemed to have lost our way and like us in the first, Ivanhoe banged on 6 goals while we were readjusting our defensive unit.  They were on top and things had taken a turn for the worse.

At the main break, the coach stressed the importance of staying calm, following the game plan and having confidence that the Old Ivanhoe players would not be able to stay with us as the game progressed. Nathan Bonney, our team fitness guru made this prediction to me “if we’re with them at three-quarter time, we should run over them in the last quarter.”  A big call.

The third quarter was an arm wrestle, both sides kicked a couple of goals (our two to Max Coughlin) but as Ivanhoe had the advantage of the wind, they should have had the lead. We were looking fresh, running and tackling hard.  Mention should be made of the desperation of our back six who just kept on fighting – great work by Ben Traeger-Haig, Harry Crisp, Lachie Cairns, Luke Deville at CHB, Rich Atkins helping out at half back and last year’s B&F winner James Prosser using his pace to advantage.

Three quarter time and the Rovers were 4 points up.  Our fitness guru called it perfectly with the skipper leading the way in the last, the boys just kept on running and you could see the bigger bodied Ivanhoe boys just couldn’t keep up.  With Chris Perkins running like it was the first quarter, Dillon Melnjak and Harry McIntyre causing chaos for the Ivanhoe mids, Sam Bradford and Harry McIntyre creating opportunities, it as a great quarter for the supporters.  A long goal to Carnovale on the run, a bullet pass from Fogs to Traegs who kicked truly for goal, another bullet pass to Fogs this time for his goal and the last the cherry on the cake, Nath Smith’s goal of the day. What a win!

A huge drinks after the game, following on from the first luncheon of the year which was attended by 90 or so. Fantastic to see so many parents and supporters coming in after the game to be part of what was a great way to start the 2021 season.  A sensation atmosphere we missed throughout 2020! Be part of it at our next home game.

NEXT UP – The Rovers travel to Royal Park (Brens Oval) to face the newly-promoted UHSVU this Saturday, before returning to the Boss in round 3 for our annual ANZAC Day match, this year against the Monash Blues. The day will include a big home game luncheon and on-ground ceremony prior to the senior match.

Round 1 kicked off with a strong Rovers Thirds team running all over Therry Penola, booting 19 goals, including an eight-goal opening term, to win by 93 points. Oscar Donald was best on ground with 5 goals. The Reserves went in confident, but it was Old Ivanhoe who proved to be the stronger of the two sides, big winning by 64 points.

A new-look Senior Women’s team had a first-round win, defeating Oakleigh by 15 points. A fantastic first up win to a young Rovers team added to by half a dozen of former Rovers U18 players playing senior football for the first time. Good to see skipper Mandy Naylor in the goals with veterans Hayley Gould and Kirsty Ebbott.

At Stradbroke Park, the Under 19s started well and with the scores tied at the final change, it was Old Xaverians who came home strong to win by 26 points. Ben Marron best for the Rovers. Full results below.

ARE YOU A CLUB MEMBER? We’ve surpassed our record and now have more than 120 signed-up club members in 2021. Amazing support from the Rovers faithful! If you haven’t done so yet, we’d really appreciate the support – starting at just $70, giving you access to home game luncheons and more. Sign up on the Rovers Online Shop today!