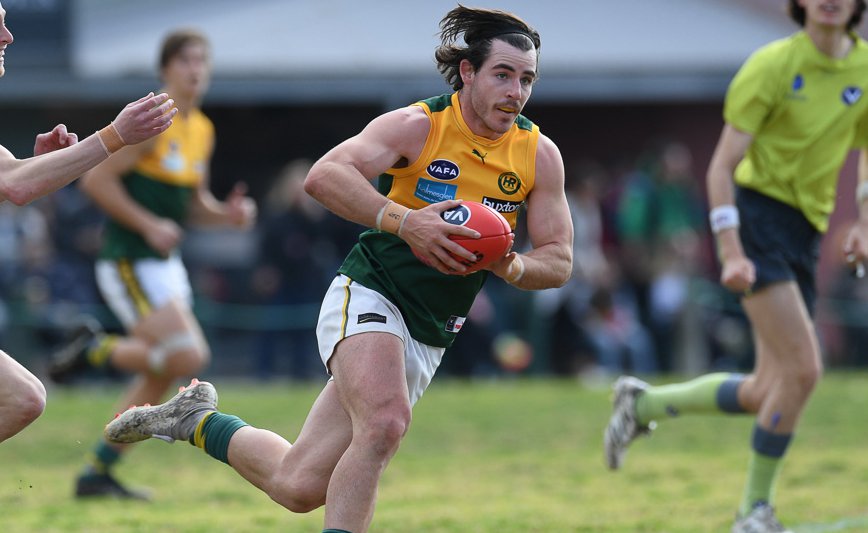 Club captain Christian Carnovale has made the decision to focus his football solely on the Hampton Rovers in 2020, stepping away from the Zebras.

Christian spent two seasons at Sandringham, playing one VFL game in 2018, before succumbing to injury in a pre-season hit-out with the Saints which he struggled to overcome this season, managing to play just the final three games of the VAFA season and played a key role in helping the club avoid relegation.

Having him back on a full-time basis in 2020 is a massive boost for the Rovers as the club looks to improve its on-field fortunes in Premier C. A two-time senior premiership player and two-time senior best & fairest winner, Christian became one of the youngest senior captains of the club in 2017, and was co-captain with Adam McNeil in the past two seasons due to his commitments with the Zebras.

Christian felt extremely supported during his 22-week injury throughout this past season, with everyone from junior players, to the women’s team and the seniors getting around him and putting a smile on his face.

“I already love the club, but this was truly something special.” Christian said.

Despite some generous offers from elsewhere, Christian continues to demonstrate the type of character he is by committing to his club.

“The Rovers right now is such an exciting club on and off field, with all my best mates playing there.”

“I want to be there to make history. There’s nothing I would want more than to captain and create the best possible pre-season, with conditioning and extra sessions, to take the club into 2020 with every reason to win the flag.”

Senior coach Anthony Quon, who was recently re-appointed for the 2020 season, spoke of Carny’s decision..

“Christian represents the values we have been instilling within our club. His loyalty to the club, and his teammates when other clubs openly contact him, demonstrates the quality of the person. He’s a leader and one who will no doubt have a strong year in 2020.”

While player-led sessions have already begun, the 2020 campaign will officially get underway with a Player Information Night on Monday, November 18, 6:15pm at Boss James Reserve to outline the pre-Christmas training campaign and team initiatives, while training commences on November 20.