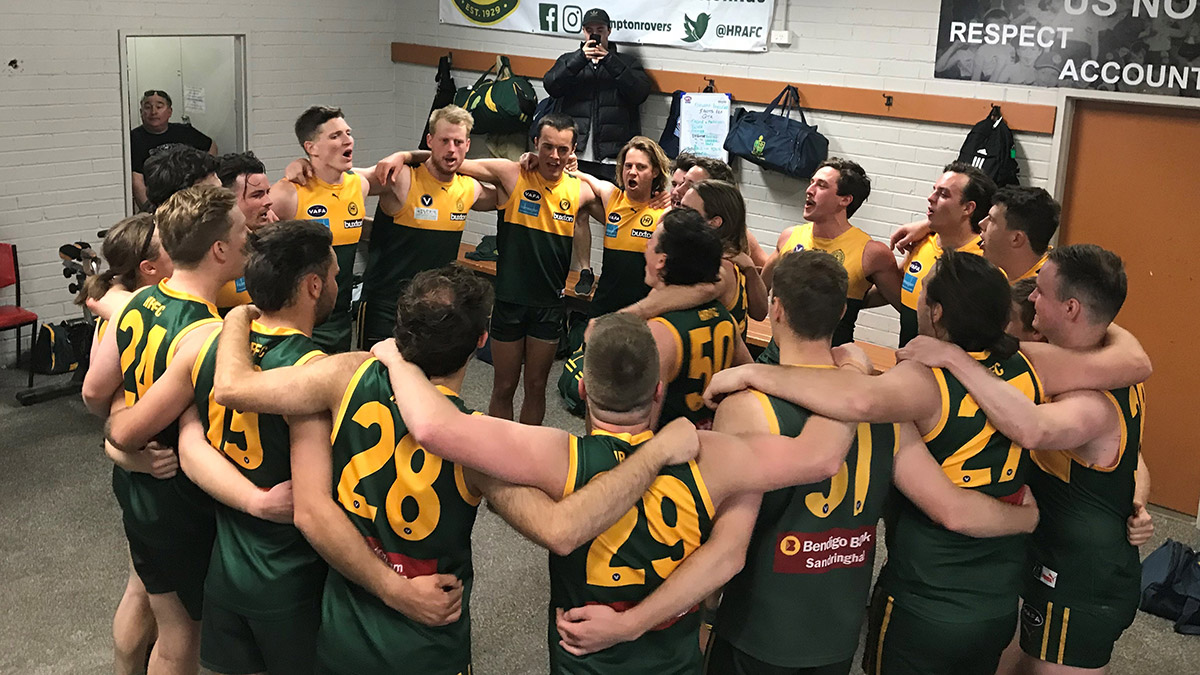 The Rovers went into the final round as hot favourites against bottom team Old Mentonians at Boss James Reserve. But word had hit the streets that the opposition had been infused with some Under 19 stock so there was a hint of mystery. The weather was good, the sun was out, so the sunscreen replaced the liniment but a strong wind to the southern end added a layer of complexity.

Old Mentonians were kicking with the aid of the wind in the first term with a 3-4 goal breeze over their shoulder. From the first bounce, Zaina was on fire racking up plenty of possessions and the Rovers were having plenty of the ball in their forward line. It wasn’t too long before the Rovers hit the scoreboard with Finn McMaster kicking truly and followed soon after by another from Clemo. Duck showing plenty of pluck was also getting plenty of touches and riling up a few youngsters from Old Mentone. To their credit though, the visitors actually showed some nerve and were to a degree holding their own and actually gelling well together as a team, looking for each other. They had their first goal on the board at the 13-minute mark with a quick centre clearance and long bomb forward which rolled through for 6 points. Clemo got his second goal via a mark and set shot but then a repeat by OMs winning the centre clearance then with another long bomb it was goal # 2 for them. Mentone got their third near the end of the quarter to have the scores deadlocked at the first break. Considering the wind advantage, it was a good effort by the Rovers to be in this position. Ballard and Lynch were also good contributors for the Rovers.

The second was a bit of struggle for ascendancy for several minutes. Mentone matching up well with the Rovers with their efficient teamwork. It was an even battle until a brilliant single handed effort by Tate took on 4 OMs along the boundary line, simply crashing and willing his body through contested footy to somehow emerge with the ball and give off to Huggy who kicked a nice running goal to bring up the first for the quarter. Again, Mentone managed to hold their own for the next few minutes but the ball was constantly in the Rovers forward line and threatening. Duck snapped the Rovers second at the 16 minute mark. This then opened up the play as all players resumed their positions for the bounce which worked to the Rovers advantage. For some reason Duck didn’t leave the ground after his goal and after a poor kick-in by OM’s fullback, he suddenly found the ball in his lap 30m directly in front of goal and he put it through. It was game-on for the Rovers, Zaina marked at the top of the goal square to goal. Jacko snapped truly for his first.  Stewart then perked up with some clever evasion and snapped his first for the day. Within a minute he had his second goal and the Rovers had established a very good lead. Irish was good for the quarter and Robbo was also very effective across half back regularly driving it deep forward. With the other backs performing well OMs were held scoreless for the qtr. If anything, the Rovers missed a few snaps that were quite gettable and could have had a larger lead.

The third quarter started well for Mentone, using the breeze but could only bring up points. The Rovers than ran and kicked it forward and held in the attacking half for a few minutes before Tate snapped a nice goal. Mentone got on the board next but with Rovers taking control J-Lov got on the end of a string of hand balls to kick a long shot goal into the wind. It was then a tight contest but the last line of defence led by Pav were reading it well and keeping Mentone at bay. With good team work the Rovers were getting it forward and this time it was Jacko on the end of a string of handballs to kick a goal. Not long after he had another one when he marked at the top of the goal square. (Still don’t know why he wasn’t dragged after his previous goal!) With 4 goals to 1 against the wind this was a good qtr for the Rovers. Curry had a very good quarter but really it was a great team effort all round.

The last quarter was pretty academic as all knew what the result was going to be although Mentone remained plucky throughout despite playing out of their weight division. J-Lov continued his great day out with the first goal by grabbing it out of the ruck deep forward and snapping truly. Not long after he kicked a second (they were certainly happening in pairs today) after a strong mark and goal. Timmons goaled after a strong chest mark while Stewart had another purple patch kicking his 3rd then a 4th on the end of a handball from Jacko to continue goal pairs! Clemo kicking his 3rd at the death when an errant wobbly kick bobbled and players all crashed into each other like 10 pin bowling pins falling over, leaving Clemo to pick it up and quick kick it through 3m out.

The big win seals third position on the ladder for the Rovers and this Sunday, the Rovers take on arch-rivals Ormond at Trevor Barker Oval at 12:00pm (following the U19s Prelim Final which starts at 9:30am).

Thanks to Ken Duddy for Gameday Manager duties, Stan Oldfield for timekeeping, Anton Hug for Goal Umpiring and the trainers.